For the casual sports fan — in America but also in other nations — the final weekend of Wimbledon is much like Christmas or Easter Mass for the fallen-away or secularized Catholic.

You watch. You go. It’s an event. You might even catch a moment of inspiration and walk out of the cathedral with a new outlook on life.

On a gray Saturday afternoon, shortly before rains watered the lawns of the All-England Club, Petra Kvitova unfurled a masterclass on grass, unleashing nothing but thunderbolts and lightning strikes, a flurry of haymakers her opponent could do nothing to stop. Kvitova attained what athletes call “the zone,” and unfortunately for Eugenie Bouchard, the 24-year-old Czech lefthander stayed there.

In a match that was not hard to analyze, a few details are worth mentioning — they highlight the difference between theater and quality, a difference that is all too often lost amidst the tumult of a major final. 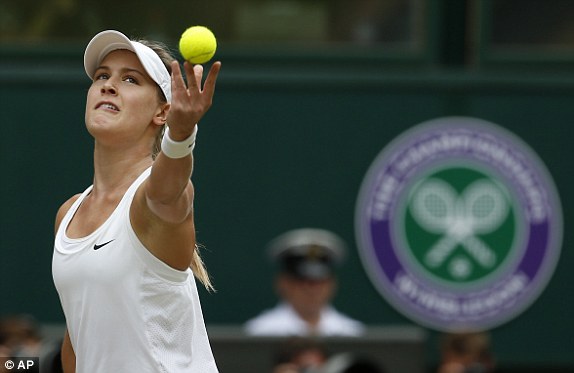 Eugenie Bouchard had to serve as well as Petra Kvitova in order to have a chance of winning this match, realistically in a couple of tiebreakers. Very simply, Bouchard didn’t. Her opponent gained the zone and stayed there. Bouchard will almost surely return to the major-final stage. On Saturday, however, the Canadian wasn’t given a chance to find her footing. The dialogue of tennis — what the opponent says from the other side of the court — can work that way sometimes. (Photos courtesy of the Associated Press)

The day began with the buzz — from ESPN and in Britain — being disproportionately sent in Bouchard’s direction, loaded with generous servings of hyperbole.  For reasons partly connected to tennis but mostly connected to the workings of the marketing-industrial complex, Bouchard — blond, telegenic, North American — has become an object of media attention, if not affection. More will be written about these issues and tensions in a Wimbledon wrap-up on Sunday evening, but it’s safe to say that for many Western media outlets, Bouchard stood at the center of this match, with Kvitova — a shy and soft-spoken Czech — standing off to the side.

Sports fans who don’t regularly watch tennis early on Saturday mornings — but will watch Wimbledon finals during the summer when other sports don’t compete with The Championships — were certainly caught by Bouchard’s looks. How fascinating it was and is that a decade earlier, a woman who is Bouchard’s predecessor in so many obvious ways had been able to win Wimbledon in her first final at the tournament. The media machinery was waiting to herald the arrival of its next uber-marketable Golden Girl.

What it got instead was supremely attractive and sexy tennis… from Bouchard’s opponent.

If you saw the women’s semifinals from Thursday, you gained an appreciation for the different textures of these two women’s styles. While Bouchard takes the ball early, she is a generally patient player who doesn’t mind hitting the extra ball and can exist quite comfortably within that context. Kvitova brought the hammer to this match, a lethal lefty serve with pop. She also brought a more fundamentally attacking disposition, one that seeks to gain leverage in points as soon as humanly possible.

ESPN, in its strong coverage of this match (minus the Chris Evert hyperbole alluded to above in a hyperlink), offered a timely note midway through the second set. The WorldWide Leader posted a graphic which said that the average length of a point was just under three strokes. That one statistic showed how much Kvitova controlled the match.

The Czech was able to throw down stacks of unreturned serves, and when she did get a ball to hit after her serve, it was often a short ball which landed near the service line. Kvitova demolishes those shots, and she didn’t veer from the script on Saturday. Kvitova was dominant on serve, but she also controlled the flow of play with her return, the other stroke which sits at the center of “gun-battle tennis” and the rapid-fire exchanges that can shut down points before they can develop.

Bouchard wanted rhythm and an extra ball to hit. Kvitova didn’t allow the Canadian that comfort zone. She smothered Bouchard with immediate pace and raw power. Kvitova also hit crosscourt shots at extreme angles to widen the court and give Bouchard another problem to worry about.

Yet, while Kvitova won this match primarily by creating and finishing boatloads of quick points, she also won the two longest rallies of the match. Kvitova’s running crosscourt backhand passing shot to hold for a 3-1 lead in the first set concluded a spectacular exchange. Bouchard seemed to have gained leverage in the manner she hoped to demonstrate again and again throughout the day, but when Kvitova — focused in a way that hadn’t been seen since her 2011 Wimbledon breakthrough — uncorked that running pass, a very strong message was sent to the other side of the court.

Eugenie, you have no place to hide, no safe space you can find in Kvitova’s game.

Yes, Bouchard — showing the resilience that has defined this Wimbledon and her 2014 season as a whole — fought off three break points to hold for 2-3, but when Kvitova easily and emphatically held her serve for a 4-2 lead, the Czech affirmed both psychological and tactical ownership of the match. Bouchard won only one game the rest of the way.

Kvitova’s ability to win a few extended rallies in crucial scoreboard situations counterintuitively enabled her to feel that much safer on the dozens and dozens of points she won with only two or three strokes.

In the end, Kvitova won every kind of point in this match. She won the short ones and the long ones. She won with her serve and her return. Her groundstrokes carried more weight. With 28 winners in 15 total games (an average of nearly two winners in each individual game she played), Kvitova set a virtually untouchable standard, especially when you realize that the Czech’s power also created a lot of forced errors from Bouchard’s racquet. If you’re averaging two winners in every game, you’re not going to lose against anyone.

Saturday’s match was nothing less than the product of an A-plus performance by the winner, who was also the player with the bigger weapons and the game more fully tailored to the surface. Kvitova played a masterful match. Her excellence is the first, last and only reason why this match clocked in at a mere 55 minutes.

It’s true that Saturday’s match wasn’t dramatic. Yet, no one could possibly dispute or question the totality of Kvitova’s soaring, sustained excellence. This was not a case of what is called “red-lining,” in which an underdog — realizing that she (or he) can’t win longer points — goes for lines and severe angles all the time, trying to win points with uncommon power.

No, this was what a baseball pitcher would call “easy power,” when a natural and fluid motion generates overwhelming pace with matter-of-fact consistency. Petra Kvitova played lawn tennis as well as it could be played. Sure, viewers who prefer a bit of theater and tension in sports did not get what they wanted. If Wimbledon’s championship weekend provides the two “High Mass” experiences of the tennis year inside the sport’s great cathedral, it’s more than understandable that casual fans would want a two-hour liturgy.

Yet, Kvitova’s tennis homily said everything that needed to be said in a very short period of time. As the tennis community hails a second-time Wimbledon (and major) champion, don’t allow the lack of drama on Saturday to convince you that this was anything less than a match defined primarily and centrally by greatness… greatness which Petra Kvitova has authoritatively affirmed in a career that must now be seen quite differently.