Where does American tennis stand on the eve of the 2014 Roland Garros tournament? The outlook is better for the women than the men… but it’s not as though the women paint a portrait of quality depth and steady, robust growth. Forget this nation’s clay-court woes; American tennis just needs players who can be consistently productive in the first place.

WTA: IT’S LONELY AT THE TOP (FOR SERENA)

American tennis can claim the favorite for the women’s tournament at Roland Garros, Serena Williams. The Williams Sisters have been able to keep the United States’s trophy haul substantial over the past 10 years. No other country can boast of two such distinguished champions in that span of time. Belgium, with Justine Henin and Kim Clijsters, comes closest. Russia, with Maria Sharapova and Svetlana Kuznetsova, also owns a place in that conversation. Measured solely by major championships, American women’s tennis has continued to collect plenty of prizes.

Yet, it’s also true that if one or two players are carrying a country, it’s hard to say that a nation is flourishing in full. More to the point, national tennis programs devote a substantial amount of resources to the development of young players. The countries that take tennis seriously want to see new crops of players replacing the old guard. A process of consistent replenishment is what top tennis nations always hope for. By this measurement — a measurement of depth, not just success at the very top (on the part of one or two legendary athletes) — the United States has fallen in a larger global context. The extent of the decline is what’s up for debate, but the reality of a decline compared to 10 years ago is appreciably clear.

Consider this fact: The last non-Williams American to win a major singles championship was Jennifer Capriati… in 2002 (Australian Open). In the late 1990s and early 2000s, Capriati and Lindsay Davenport were fairly consistent threats at majors, giving the United States four players who could expect to reach the quarterfinals or better. That’s what a healthy tennis nation looks like.

Entering this Roland Garros tournament, only one American other than Serena will be seeded in the top 25: Sloane Stephens, who will be just inside the top 20. Stephens’s ranking has been bolstered by strong showings at major tournaments — the 21-year-old has reached the fourth round or better in each of her last five majors — but year-round consistency has remained elusive. Venus Williams, currently hovering around a No. 30 world ranking, has not made the second week of a major (the fourth round) since the 2011 Wimbledon tournament.

The simple and lamentable reality engulfing American women’s tennis is that outside of Serena, there’s only one player who has a decent chance of surviving the first week of a major. Jamie Hampton did climb as high as No. 24 in the rankings last July, but she’s been recently sidelined by hip surgeries (yes, plural) and has dented the fourth round in only one major.

A player who could eventually become a regular second-week player at the majors is 19-year-old Madison Keys. She reached the third round at two majors last year. Yet, a loss to an injured Simona Halep last week in Rome (Halep won 12 of the last 13 games in the match… and then withdrew from the tournament due to injury concerns ahead of Roland Garros) put the brakes on the notion that a rapid ascendancy is just around the corner.

In two years, when Keys reaches Stephens’s current age of 21, she might make a substantial mark on the WTA Tour. Her career shows promise, and it’s important to emphasize that it’s not until 22 to 24 years old when a tennis pro truly needs to begin to post big-league results in order to establish a top-tier career. Yet, the point remains: At the present moment, Serena is the only American on the WTA Tour who can be expected to make the quarterfinals or better at a major. Stephens might get that far, but that’s more of a hope than a locked-in expectation.

Russia is a nation that has been able to maintain an extensive list of capable pros on the WTA side. Italy has enjoyed a period of profound prosperity over the past four years, with Francesca Schiavone passing the torch to Sara Errani and Roberta Vinci. Serbia’s duo of Ana Ivanovic and Jelena Jankovic endured some hard times in recent years, but the pair has a chance to do really well in Paris this time around.

ATP: JOHN ISNER’S PROBLEMS ARE THE LEAST OF AMERICA’S PROBLEMS… WHICH IS A BIG PROBLEM 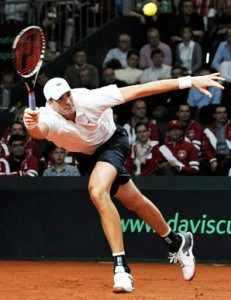 When John Isner pushed Rafael Nadal at the 2011 Roland Garros tournament and then defeated Roger Federer on indoor clay in the 2012 Davis Cup, his future on the surface appeared brighter, but subsequent years have exposed Isner’s limitations on the dirt.

John Isner is not a semifinal-level major-tournament player. He never has been. Expecting that level of performance from the tall, lanky Georgia Bulldog is not reasonable. If any American tennis fan has felt that Isner should be a title contender at tennis’s most prestigious tournaments, such a level of faith has been misplaced.

Isner’s career is a strange mixture of ups and downs: The player who needs to play short points, given the style of tennis he plays, has found himself enmeshed in plenty of long matches at majors. He’s fought admirably within those matches, yet often lacked the ability to win the final few points.

Tennis diehards who have closely monitored Isner’s career will tell you why this confluence of characteristics has come into being: Isner is able to save himself with clutch first and second serves, but he can’t then showcase a return game good enough to close down matches as a receiver of serve. The coexistence of a particularly strong serve with a conspicuously weak return game leaves Isner caught in a cycle of marathon matches. He can’t end the match prematurely by losing quickly… or by winning quickly. It’s his blessing… and his curse.

Isner has never existed on the same plane as the sport’s elites, and he hasn’t even existed on the same level as the second tier of top-10 pros that have failed to win majors: Jo-Wilfried Tsonga, Tomas Berdych, and David Ferrer. Expecting Isner to have attained such a level of prominence is unfair to him.

Expecting the tall server to make the round of 16 at Wimbledon and the U.S. Open? That seems fair.

Isner, it bears mentioning, is 29 years old. He made his first splash on tour at the 2007 U.S. Open, when he took a set off Roger Federer (at the height of Federer’s prime) in the third round. He’s had plenty of bites at the apple since then, and in Masters 1000 events, he’s made five semifinals and two finals. Moreover, in each of his two runs to a Masters final, he’s beaten Novak Djokovic. In a best-of-three-set format, he’s threatened to win hardcourt titles, particularly on faster surfaces (Cincinnati, Bercy Paris Indoors). No, he shouldn’t be making major semifinals, but making the second week of a major shouldn’t have been so elusive since his 2007 breakthrough.

Yet, Isner has reached the second week of a major only three times, and never at Wimbledon. It’s true that the tiebreaker is the ultimate tennis crapshoot, but Isner’s overwhelming serve should have enabled him to win a high percentage of tiebreakers in at least some (additional) major-tournament matches.

Should Isner be an annual, uninterrupted inhabitant of the round of 16 at Wimbledon and the U.S. Open? No. Should he have several more R-16 showings to his credit? Yes, and that doesn’t seem like an overly harsh verdict, either. Isner has allowed winnable third-round matches to slip through his fingers in each of the past two U.S. Opens against Philipp Kohlschreiber, a talented but erratic player. Isner should have been able to split those matches against Kohlschreiber — not sweep them, just split them.

That reality magnifies the extent to which Isner has left money (and rankings points) on the table at the majors.

This, ladies and gentlemen, is the only American male tennis player currently in the top 60.

Want to know the rest of the story about American men’s tennis, the story which stretches beyond Big John? Read this article by Tom Perrotta of the Wall Street Journal from a few weeks ago.

The American women have work to do. The men? Save for Isner, they’re not even on the radar screen at the moment.

Plenty will be written about Americans’ struggles on clay courts over the coming weeks. However, don’t allow one surface to obscure the bigger problem with American tennis, especially on the men’s side: Quality depth — defined as “second-week-of-a-major depth” — is not a present-day reality.