One of the most important sports books of all time, whether or not you’ve read it, is Timothy Gallwey’s The Inner Game of Tennis, published in 1974. Gallwey explored the mental dimensions of tennis, unearthing insights that coaches in the sport have used ever since. Gallwey’s view of tennis has spread to other sports. Pete Carroll, head coach of the NFL’s Super Bowl champion Seattle Seahawks, has incorporated Gallwey’s work into his own philosophy on how to get his athletes to perform with a relaxed mindset and an unflagging competitive spirit.

There’s more than just smoke and mirrors or false-prophet, feel-good psychobabble in Gallwey’s work. His look inside “the inner game” has held up quite well over the past 40 years.

Those insights were substantially reaffirmed on Friday in the gentlemen’s semifinals at Centre Court Wimbledon.

Neither match offered any sustained stretch of quality tennis by the two players on court. Roger Federer had an easier time than expected against Milos Raonic, winning three sets without need of a single tiebreaker. The 6-4, 6-4, 6-4 win involved hiccups when serving for the second and third sets at 5-4, but Federer won the 30-30 points in those two situations and managed to close out Raonic, the first Canadian man to reach a major singles semifinal.

The first semifinal between Novak Djokovic and Grigor Dimitrov was at least psychologically compelling. Djokovic struggled with his own emotions and his feel for the court. His claycourt movements led to many stumbles — the same was the case for Dimitrov, only to an even greater degree — and he endured stormy, distracted patches of appallingly poor play in sets two and four to advance to his second straight Wimbledon final, his third in the past four years.

When a Djokovic match doesn’t become a routine match, the Serbian superstar reveals the full spectrum of human expression, or something close to it. Such was the case on Friday. Yet, through all of his peaks and valleys and mood swings, the top seed (ranked second in the world but seeded first due to the use of Wimbledon’s adjusted grass-specific seeding formula) managed to go the distance at the world’s most famous grass-court tournament.

You could say that while Djokovic’s “inner game” was unsteady for much of a sun-baked afternoon, it became unshakable when the moment demanded airtight tennis. In that sense, what Djokovic achieved against Dimitrov reinforced the past three years of his marvelously consistent career. He can look conspicuously, almost jarringly, inelegant for long periods of time, but when scoreboard and match pressure reach a great and suffocating height against opponents not named Rafael Nadal, Djokovic rarely fails to prevail. Though being anything but a natural on grass, he’s made more Wimbledon finals than Federer, Nadal, and Andy Murray over the past five Wimbledons, dating back to 2010. 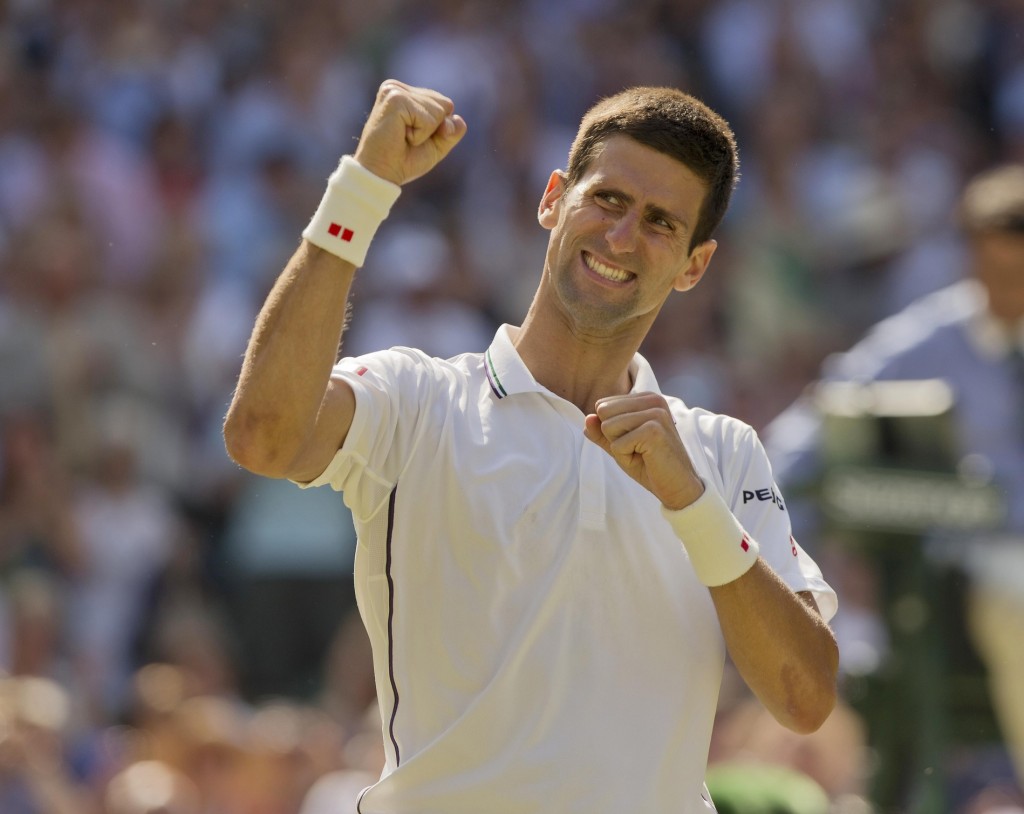 Does Novak Djokovic always play “pretty tennis”? No. It’s also true that unlike beauty pageants, figure skating competitions, and Olympic diving contests, style points do not help determine who wins and loses. Djokovic is a “find a way” expert. On Friday, he found his way to a 12th final in the last 16 majors.

If you’re impressed by that fact — you should be — it has to be said that Djokovic has done something even more eye-popping by making this final on Sunday. Djokovic has now made 12 of the last 16 major finals and six of the past eight. Moreover, since a bracketing quirk (due to Rafael Nadal being seeded third because of time spent away from the tour due to an injury) forced him to play Nadal in the 2013 French Open semifinals and not the final, it could be said that Djokovic has been a final-worthy player in 13 of the last 16 majors. As a point of comparison, Nadal — while being injured for several months — has made the finals in 10 of the past 16 majors. (The point here, just to be painstakingly clear, is not to throw any shade toward Rafa, but to note that for all the majors he hasn’t won, Djokovic does continue to produce high-level consistency in his sport.)

Yes, it’s true that when Nadal gets to major finals, he wins them (14-6), whereas Djokovic has a losing record in them (6-7). However, when it comes to making major finals, Djokovic has been the most consistent player on the ATP Tour since the 2010 U.S. Open. His streak of 14 consecutive major semifinal appearances ended at this year’s Australian Open (losing to Stan Wawrinka in the quarterfinals), but Djokovic remains dependable in nearly every theater of tennis. His one weakness is the major-final demon he’ll have to conquer on Sunday, but give Novak credit: He regularly gets there.

In order to get there, you have to be made of something special between the ears. Djokovic’s inner game was stronger than Dimitrov’s in the biggest moments of Friday’s match.

Djokovic survived disaster against Dimitrov at 3-3 in the third set of a tied match (one set apiece). Serving at 30-40 and looking completely disjointed on court — a sight that’s far more commonplace than a casual sports fan would think — Djokovic lifted a weary backhand down the line toward the deuce side of the court. His shot was not cleanly struck, but it cleared the higher part of the net (it’s higher on the sides, lower in the middle) by no more than an inch and a half. It landed smack on the sideline at the edge of the service box. Once Djokovic avoided that scare — and a break deficit to an opponent who was gaining strength at the time — he was able to find his way to a third-set tiebreaker, the crucible written about multiple times over the course of this tournament.

That’s when a member of tennis’ so-called “Big Four” became tougher, and a member of the sport’s “Young Gun Generation” couldn’t quite handle the heat. 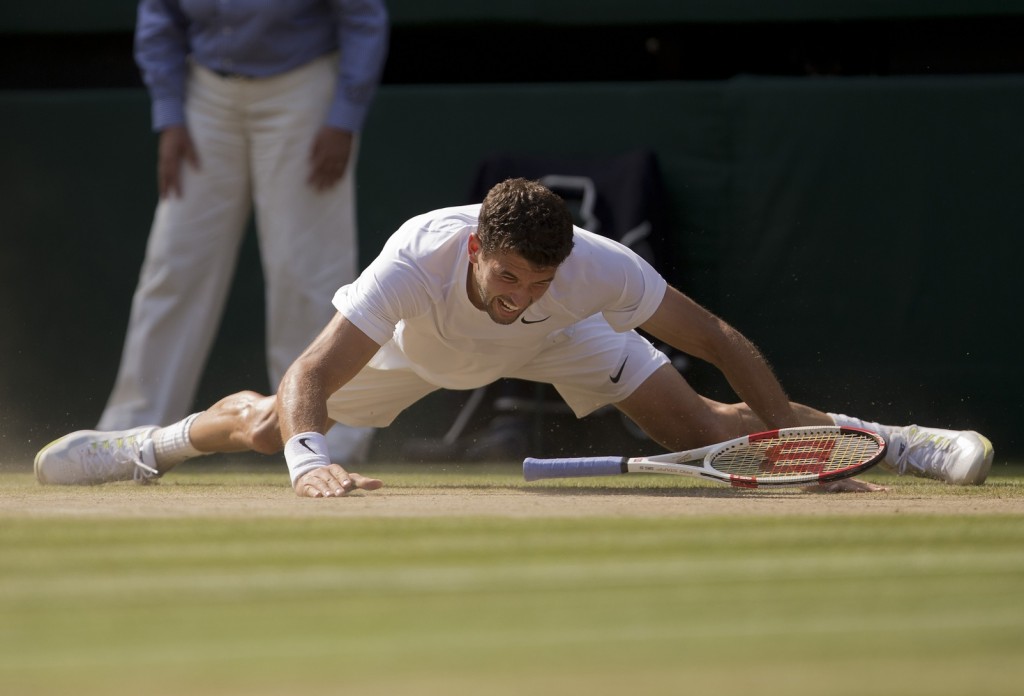 Grigor Dimitrov couldn’t find his footing — not in a literal sense, and not when the weight of the moment acquired its greatest proportions in an emotional cocktail of a Wimbledon semifinal on Friday.

In the third-set tiebreaker, Dimitrov repeatedly stumbled… literally, but also in terms of his first serves and overall shot selection. A flood of errors enabled Djokovic to cruise to a 4-1 lead and not encounter any real resistance. In a turnabout from his quarterfinal win over Andy Murray, Dimitrov became the player who imploded while his opponent got out of the way and merrily reaped the benefits of a crucial set victory.

In the fourth-set tiebreaker — following a rollercoaster in which each player continued to fight a largely losing battle with his cranial regions — Dimitrov forged a 6-3 lead and earned three set points to force a deciding fifth stanza. However, after Djokovic calmly held his two service points to bring the breaker to 6-5, Dimitrov had to nail down the set with his serve.

Next to a match point or, as a second example, a break point in the face of almost-certain death in a must-win set, one of the biggest single points in any tennis match is the 6-5 point on serve in a tiebreaker. This is especially true in a men’s match, where the serve is more prominent and available as a point-deciding shot than in the women’s game.

Andy Roddick had a 6-5 point on serve in the second-set tiebreaker during the 2009 Wimbledon final against Federer, after the Swiss saved his set points on serve at 3-6 and 4-6. Roddick overshot a high backhand volley on that point, and Federer stole the tiebreaker moments later, gaining the escape hatch he needed to win the match in five sets.

In this match, Dimitrov knew how important the 6-5 point was… and that’s part of the problem for players who haven’t been in a Wimbledon semifinal or a major semifinal before. It generally requires a trip or two into the furnace before a tennis pro learns how to handle that kind of situation. Sure enough, Dimitrov couldn’t find a first serve at 6-5, and Djokovic steered him around the court to level for 6-6. Dimitrov then had to change ends (as is done every six points in a tiebreaker) and face a mini-match point at 6-6. His first serve again deserted him, and Djokovic earned an actual match point on his own serve at 7-6.

Djokovic didn’t convert that point, but he did hold his serve on the 7-7 point a moment later. With Dimitrov unable to clock the aces that had seen him through the first five rounds of this tournament, Djokovic was able to avoid a fifth set, winning the 8-7 point on his opponent’s serve. The man who had been there before was the man who closed the sale.

Dimitrov won a measure of respect for competing with intensity, but Djokovic mastered the inner game in a 6-4, 3-6, 7-6 (2), 7-6 (7) triumph. When one considers this particular stat about men’s tennis in the Open era (since the 1968 French Open, a span of almost 50 years), it becomes apparent how rare it is for most tennis players to even make one major final. Grigor Dimitrov learned this lesson on Friday; his opponent is known for teaching it quite a lot.

And so, we move to Sunday’s final. Dimitrov and Raonic both hoped and wanted to be there, but success is about more than the wanting; it’s about composure and concentration when the glare of the spotlight is brightest on a gleaming afternoon inside the cathedral of tennis.

Roger Federer and Novak Djokovic showed their young-pup opponents a thing or three on Friday. Now, they get to test their nerves against each other on a Sunday made for greatness… and a blockbuster matchup non-Nadal tennis fans will savor.