Sports are often cruel and contradictory. They frequently force the human person to do that which is so utterly essential in matters far more important than playing a game: Hold competing, counterintuitive, coexisting truths in tension with each other.

Walking in the present-moment reality of complexity, ambiguity, pressure, and conflict — this is what the great spiritual teachers talk about. This is what it means to handle intimate relationships, work situations, personal ambitions, and larger holistic worldviews encompassing politics, religion and culture. In your greatest moments, you can still realize how much of life remains unconquered. In your worst moments, you can still realize just how much you’ve achieved.

This, in many ways, is the tennis career of one Novak Djokovic, who will step inside the theater of Court Philippe Chatrier in Paris on Sunday against his foremost rival, Rafael Nadal, with the French Open and a career Grand Slam waiting to be claimed.

The drama of Sunday’s final is a simple kind of drama, but the enormity of the drama can’t be measured — it’s off the charts.

There are no secrets with Djokovic and Nadal. Games, sets, the match as a whole — they’re going to be contentious, physical and sprawling, using every inch of what is, in terms of surface area, the largest clay court in the world when you include the outside-the-rectangle areas (Ashe Stadium in New York is the biggest stadium with the most seats).

The loser won’t go tamely or timidly into the night. The winner won’t coast or cruise. Victory will be earned, defeat the bitter herb of a crucial mistake or lapse. The player who wins the last point will forge a spectacular triumph. The loser will be one of the two best players on the ATP Tour. He’ll also be the owner of a fat paycheck and 1,200 rankings points, more than what can be gained from a Masters 1000 title.

More about the loser, while we’re at it: He will own supremacy over the rest of the ATP Tour save for one opponent. He will still have a very good — nay, GREAT — life and career in the present tense.

Yet, when decorated tennis players face each other again and again in major finals, it’s always high-stakes poker — not always equally for each man or woman, but always substantially. This is what Nadal and Djokovic face on Sunday, and though there’s a lot for Nadal to attain in this match, Djokovic is the central focus of the proceedings in Paris. 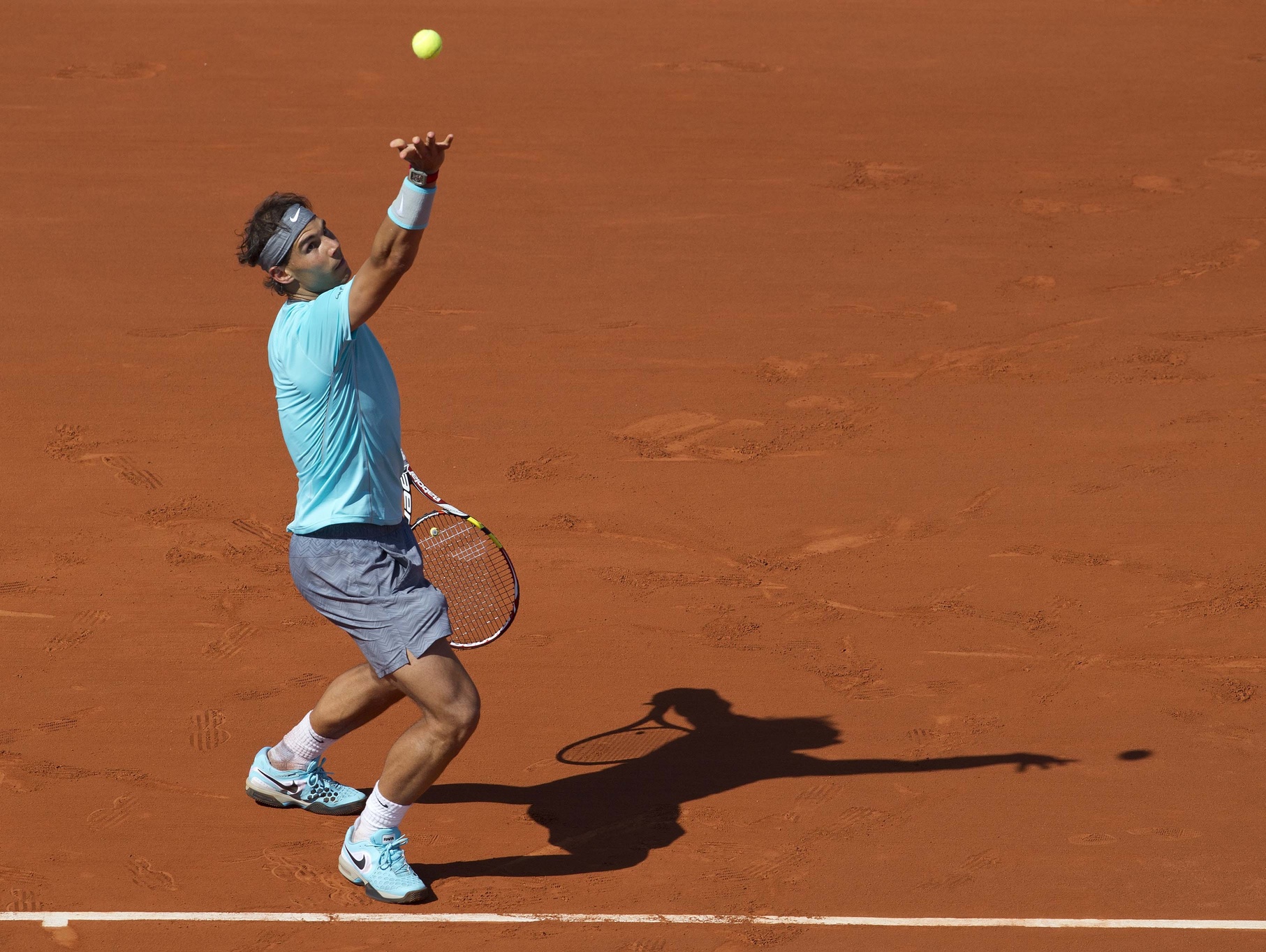 Nine French Open titles, 14 majors (tying Pete Sampras), a 66-1 record at Roland Garros, the continued upper hand against Novak Djokovic in major finals — all these prizes are on the line for Rafael Nadal… and yet Djokovic has more at stake.  Yes, welcome to this stupendously glorious Golden Era of men’s tennis.

It all seems contradictory and counterintuitive… because it is.

Rafael Nadal is and has been, in a very real sense, the center of everything in clay-court tennis over the past nine years. With Roger Federer running out of steam at Wimbledon in recent years (save 2012), Nadal has established ownership of one surface more than any other Open Era male player.

The tides rise and fall, the seasons come and go, the rains nourish the earth, the snows melt away, the sun greets the springtime… and Rafael Nadal wins Roland Garros. You know what you’re going to get from him, you know what you’re going to see from him. Of course he’s the centerpiece of this match — at least, you can make a case for it from that larger point of view.

Yet, on a much more essential level — one in which a championship confrontation is reduced to its core drama and the questions attached to it — Djokovic, not Nadal, stands at the heart of everything that will happen in Paris when it’s time for the first ball to be struck.

When one says that Djokovic is the centerpiece of this match, it is a deceptively simple way of saying the following:

On Sunday, Rafael Nadal — King of Clay and defender of The Citadel known as Roland Garros — will be his typical, resilient, tireless, combative, relentless self. Nadal, despite an X-and-O matchup that doesn’t really favor him (at least not the way he’s favored against Federer), has been able to turn back Djokovic in Paris, even after losing to the Serbian superstar at other tour stops on clay and other surfaces. Djokovic has gained ground on Nadal in the head-to-head over the past three and a half years, but after his legendary 2011 season, he’s beaten Nadal in only one major final. The truth is a harsh one, but not inaccurate: Djokovic — already assured of a glowing legacy in men’s tennis — needs to win this match if he wants to elevate that legacy by several notches.

None of the following is meant as a criticism of Djokovic, because he’s been one of the two most reliable and accomplished players in men’s tennis since September of 2010, rising above the competition more often than not in a cutthroat era of his sport:

* Djokovic has won one major tournament in his past eight attempts.

* Djokovic is 1-4 in his last five major finals.

* Djokovic is 0-3 in his last three matches against Nadal at the majors.

* Nadal has more than doubled Djokovic’s number of major titles, 13 to 6.

Again, these stats are not offered as criticisms. They merely show that for all of his accomplishments, Djokovic — who had five major titles entering the 2012 French Open and seemed to be well on his way to a 12- or 13-major title haul — is stuck at six. Djokovic will win more majors before he’s done — of this, there is zero doubt. Yet, the past eight majors have prevented Djokovic from reaching that much higher place in the tennis pantheon, the place where the Borgs and Samprases and Lavers and Nadals and Federers will always live.

Think of it this way: The McEnroes, Edbergs, Beckers, Agassis, Lendls, and Connorses of history were hardly underachievers. (McEnroe is the one possible exception to that list, given that the ceiling of his talent was so high; even then, we should all “underachieve” the way McEnroe did.) The fact that their major trophy counts didn’t reach 10, 11, or 14 doesn’t mean they failed; that set of realities simply magnifies how much the Mount Olympus Club of men’s tennis managed to succeed and, more precisely, transcend.

You should be able to see the larger point: If Novak Djokovic loses to Rafael Nadal on Sunday, he doesn’t become more of a failure or less of a champion. He merely becomes less able to rise to the exalted realm Nadal will always inhabit. Djokovic is playing for the career Grand Slam, yes, but he’s really playing for that much higher place in the whole of tennis history.

Djokovic has had problems closing down major tournaments ever since his ballsy win over Nadal in that 5-hour, 53-minute Australian Open final 28 months ago. His 2011 season, an all-timer for as long as tennis is talked about, has become an ever more conspicuous exception in his career instead of the norm some thought it could have turned into. He’s never won more than one major in any year other than 2011. He’s won only one major more than once (the Australian Open). These are first-world tennis problems, sure — we should all have Djokovic’s problems — but they are the kinds of problems that determine the answers to these larger questions of legacy, reputation, and whether your legendary tennis album is “merely” gold or, indeed, sweet platinum.

Speaking of answers and questions, we arrive at the fundamental truth of Sunday’s match:

Nadal is going to be the one asking the questions. Djokovic — the centerpiece of the match for all reasons previously explained and established — must provide the right answers. It’s time for a great champion, Novak Djokovic, to once again show the tennis community that closers don’t merely come close at the majors; they finish the job.

As Nadal himself has been known to say, “We gonna see, no?”