Major-tournament finals are played on the same tennis rectangles used for first-round matches and fourth-round matches, but they advance the story of tennis in ways the preliminaries rarely if ever do. When a 13-time major champion takes on a man who has made nine of the past 12 major finals (not including the 2013 Roland Garros semifinals, which were essentially the final in that tournament), more than just a championship itself is at stake.

When the greats of any sport meet on a championship gameday at the end of a tournament or a long series of competitions, history looms over the proceedings. Sure, Rafael Nadal and Novak Djokovic were playing for over $1.1 million. They were playing for 800 extra ATP rankings points and the No. 1 ranking spot on tour. Yet, if you follow sports with more than just a passing interest, you know that once you’ve banked enough money to make a successful life, competition ceases to be about the material riches. For those who dare to be great, the measure of the men and women who step into the arena is how they perform in the moments that make the most memories. The legacies of players are built on how they handle the occasions that leave the richest, most indelible impressions upon the human heart and mind.

As was said when this tennis blog started three weeks ago, Rome is a nice tournament to win, but Paris is what matters on European red clay. Players fatten their bank accounts and rise in the rankings when they conquer Italy. They become immortals when they subdue France, its moody crowds, and its preference for a very particular brand of tennis. This is why majors are majors, and Masters 1000s are Masters 1000s.

There are entirely legitimate reasons to love and value the Masters more than the majors, but the reality of best-of-five-set tennis is precisely what makes major tournaments the ultimate tests of the best performers on the planet. When you win a best-of-three tournament, you know you’ve been effective. When you win a best-of-five-set tournament, you can be sure that you have sustained your effectiveness… at least more than anyone else. When you win a major in men’s tennis, laying the best-of-five beast at your feet, you can be confident in knowing that your toughness — your ability to master the intangible challenges of this sport — has been tougher than your opponent’s toughness.

This is what sets the stage for the story of the 2014 Roland Garros men’s singles final between Rafael Nadal and Novak Djokovic.

Nadal and Roger Federer changed the sport of tennis by introducing fans to the possibilities of geometry and form that can emerge on a court. No two players did more (with advanced racquet technology and the other improvements attached to the past 20 years of tennis) to change a fan’s sense of what could be created in a tennis match.

What Nadal and Djokovic have managed to do in their rivalry is to change a fan’s sense of what is possible for two men to achieve in terms of stamina, endurance, resilience, and the other arts attached to the athlete’s fundamental goal of remaining effective under physical and situational duress. No two men in this current era of men’s tennis have relished whacking antlers more. No two men in this era (though Andy Murray comes close) relish the prolonged slugfest, the repeated trading of blows, more than the Mallorcan and the Serb.

Both men certainly produce their fair share of artistry — you don’t become a tennis legend without being able to make all sorts of great shots — but the shared cornerstone of their games is defense. Nadal and Djokovic are the best in their era at shrinking the court — again, Murray comes close here, but Rafa and Novak have established and maintained the standard over a longer period of time. Murray enjoyed a sensational 12-month period from July of 2012 through his Wimbledon win in July of 2013, but since the end of Federer’s prime in the first half of 2010, the ATP Tour has usually been the Rafa and Novak show, with the two trading great years (2011 and 2013) while meeting more often in major finals than other members of what was once “The Big Four” (with Federer and Murray).

When these two men meet in any major-tournament final, one expects grueling, grinding baseline tennis. When they meet on clay — the surface most conducive to patient point construction and a willingness to hit hundreds of extra balls over the course of a match — a four-hour match is not just a wishful hope, but a reasonable expectation. With both players moving very cleanly through their first six rounds at Roland Garros, save for very isolated set-specific hiccups, a five-setter or a close four-setter stood out as logical predictions, regardless of the ultimate winner.

Placed in this context, the question of the moment was a weighty but simple one: Would Novak Djokovic be able to overcome and persevere against the consummate overcomer-perseverer in tennis (even more than women’s French Open champion Maria Sharapova)?

At the end of a match that never really found its footing, Djokovic was unable to say “yes” in the situation he has longed so deeply to solve.

The story of Rafael Nadal’s ninth French Open title, won by a 3-6, 7-5, 6-2, 6-4 scoreline over Djokovic on Sunday, is simply that in the best-of-five realm on crushed red brick, Nadal remains the crusher of others’ dreams, the better defender of both his championship and the territory known as Court Philippe Chatrier. Djokovic could not overcome the overcomer. He could not find enough quality to beat Nadal on a day when the greatest clay-courter of all time played an average match.

The turning point in the contest was not hard to divine: With Nadal having forfeited a 4-2 break lead in the second set, Djokovic had a chance to create a second-set tiebreaker and snatch a two-set lead, something that had never been done in 66 previous Roland Garros matches against Nadal — not even by Robin Soderling in the 2009 upset that continues to become greater with the passage of time.

Djokovic had not been stellar in his own right, but when he served at 5-6 in the second set, with the first set already in his pocket, he had to know that if he could just play 12 to 15 solid minutes — holding for 6-all and then winning the breaker — he would be in position to achieve the career Grand Slam and win the one major that has eluded his grasp. This was a moment of pressure for Djokovic, but also a moment of great opportunity. Nadal was there for the taking, much as he was in the early sets of his 2005, 2006, and 2007 matches against Federer.

Yes, it’s instructive to recall the Federer-Nadal clashes at Roland Garros on this significant Sunday. Even then, a credentialed Nadal opponent realized how tough it was — and was going to be — to hit past Nadal and break him down on terre battue. The simple knowledge of how hard it is to win clay-court points against Nadal — enough to win in a best-of-five match — wears on even the best players around.

Djokovic tasted that bitter knowledge yet again on Sunday, building the kind of rich-yet-incomplete Roland Garros legacy that will read thusly on his tennis tombstone: “He won a ton of matches and made multiple finals… but then he played Nadal.”

Djokovic fell apart at 5-6 in the second, committing the shaky errors that defined the Serb’s career until his late-2010 breakthrough against Federer at the U.S. Open and then in Davis Cup competition. Djokovic, from late 2010 through the 2012 Australian Open final, had become what Nadal had previously been: the best survivor and the most resourceful marathon man in the sport. At the 2012 Roland Garros final, though, Nadal began a process in which he took back that mantle, and in 2013, Nadal reaffirmed his (latest) ascendancy on clay before consolidating his gains versus Djokovic at the U.S. Open in New York. Entering this final, Djokovic was tasked with taking back mental ownership of this rivalry on its biggest stages. It was time for Djokovic to be the better survivor, the one who could endure more.

One set later, a newly-invigorated Nadal found his forehand and took a substantial lead. Djokovic appeared to have a little life left in his bones and marrow when he shockingly broke Nadal at 2-4 in the fourth to stay in the match, but at 4-5, 30-40, this match recalled that 2012 Roland Garros final, when Nadal began to take back this rivalry at the majors. 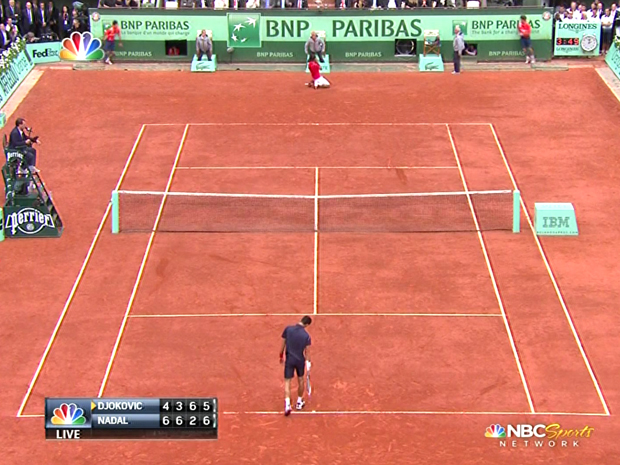 This screengrab of NBC Sports Network’s 2012 French Open men’s final broadcast shows Rafael Nadal celebrating after Novak Djokovic double-faulted on match point. How eerily noteworthy it is that Djokovic double-faulted on match point two years later in the same situation, losing in four sets on a day when he could have done better. (Image courtesy of Business Insider)

In 2012, serving to stay in the fourth set and the match against Nadal in a Roland Garros final, Djokovic double-faulted on match point. The fact that Djokovic double-faulted on match point two years later — in the same Roland Garros final; the same late-in-the-fourth-set situation; and amidst the same “if I can just clear this hurdle, I can win the Grand Slam” tensions — offers a perfectly representative illustration of the fact that Nadal, even when not at his best, is the mental giant of this sport. Djokovic is a formidable mental marvel — he’s better than every other player on the earth — but Nadal is tops between the ears.

This match deserved a grade no higher than a C-plus. It was a noticeably ordinary match laden with errors and hitting that did not rise to a fever pitch for most of the day. Yet, the fact that Nadal won it — even after a clay-court spring in which so many people doubted him and wondered if his reign in Paris was finally at an end — says something important about him.

Players try to play well. If they can’t play well, they can at least prevent the other player from playing well. Nadal didn’t really even prevent Djokovic from playing well for much of this match — it was often just a matter of Djokovic losing focus (that’s what unforced errors truly are, of course).

Today, though, Nadal’s aura won this match. Nadal’s mere presence on the other side of the net — in a best-of-five-set match, on clay, in his nearly untouchable Citadel known as Roland Garros — was enough of an obstacle for a highly-accomplished and thoroughly proven champion, Novak Djokovic. It was enough of an obstacle to make Djokovic falter in key moments. It takes some kind of presence to do such things again and again to a Djokovic or a Federer, owning French Open finals with a totality which exceeds Bjorn Borg and every other man who has ever picked up a racquet.

Speaking of Nadal’s presence, that most basic reality — the 88 percent of life known as merely showing up — means that he’ll be able to win a tenth French Open next year, a possibility which boggles the mind.

Let’s get one thing straight in advance: Unless his back gives out or his physical health is in some other way reduced to a substantial degree, you had better not spend the 2015 clay-court season picking Djokovic or the field…

… at least, if you value being right at Roland Garros.