It was not a day anyone who follows tennis — as fan or chronicler — expected to see two very long weeks ago, when the 2014 U.S. Open began.

It was, however, a one-day window into the future of tennis… not next year or the year after that, but six years into the future, when this decade ends and the Holy Trinity of Men’s Tennis very likely rides into the sunset as a group.

Roger Federer will still be playing tennis in 2016, barring injury. Rafael Nadal, should he manage to stay healthy, has a few strong years left in the tank, and Novak Djokovic could enjoy even more longevity. Yet, lifespans are cruelly short in tennis, far more than in golf or many team sports. The future isn’t here to stay, but the future is felt more genuinely than ever before in men’s tennis. Monday evening’s U.S. Open men’s singles final between Marin Cilic and Kei Nishikori allowed the global tennis community — and Arthur Ashe Stadium ticketholders — to get a taste of what the future might be like.

The obvious questions hung in the New York air: Would the players be nervous? Would Djokovic have fared better against Cilic? Would Federer have been able to play his game against Nishikori? Who would the crowd support? How packed would the stands be? What ratings would the match pull in?

All of these questions contained a measure of intrigue, but a simple fact remained: The eternal dialogue of a tennis match would unfold, with one man winning his first major title. Two players would step to the edge of a familiar rectangle and try to serve, defend, crack groundstrokes, volley, lob, and do all the other things professional tennis practitioners try to do every time they go to their work office.

This was a match between a great server and a great returner, between a man from a nation whose flag is red and white, and a man who comes from the Serbo-Croatian part of the world.

The names were unfamiliar, but there were contrasts and tension points to be found in the match, the very things that make for a memorable fight if both players could manage to be at their best. Tennis fans know how a lot of familiar matchups play out. They relish certain battles within the fuller competition, and that’s part of what fuels a crowd’s anticipation of a rivalry each time it was renewed. Nishikori-Cilic, though, was not a familiar confrontation, and that lent a great deal of mystery to this match, making it paradoxically more intriguing than a contest seen 25, 30, 35, or 40 times before. (Nishikori entered the match with a 5-2 lead in the head-to-head against Cilic.)

Tennis fans would get to see two players deal with the timeless and tripartite test of the sport: against the opponent, the situation, and the self within. The buildup to Monday’s final wasn’t filled with buzz the way it would have been for a Federer-Djokovic match, but as the first ball was about to be struck near 5:10 p.m. New York time, it surely dawned upon many tennis fans that after many years of rooting for (or against) one of Federer, Nadal and Djokovic, they:

A) didn’t need to truly worry about the outcome, meaning that:

B) they could just appreciate a tennis match on its own terms.

This was different. It was relaxing. It wasn’t all bad. This was the sport taking the spotlight instead of the brand names; the box-office identity; the celebrity flavor; and all the other things men’s tennis has understandably become in this, its Golden Era of Big Three brilliance.

The only question which mattered, in the end, was this: How good would the tennis be? That was the sole basis for judging the quality of this out-of-the-blue moment, a moment that was completely unforeseen by those who follow tennis throughout the year.

In the end, while Kei Nishikori didn’t offer his very best, Marin Cilic remained as locked in as he was in his conquest of Federer in Saturday’s semifinals. Though Nishikori failed on several occasions to break Cilic from 15-40 positions and lacked a full tank of energy throughout the evening, the weight of this match was carried by Cilic from beginning to end. Nervelessly serving out the first and third sets while breaking Nishikori for the second (after losing his serve for the only time on the day, it should be noted), Cilic displayed every last ounce of the confidence that belonged to him against Federer and also versus Tomas Berdych in the quarterfinals.

A better Nishikori might have turned a 6-3, 6-3, 6-3 match into one with a closer scoreline, but the final outcome probably would have remained the same. Cilic won three sets rather decisively, and a number of his 27 unforced errors (against 38 winners) came on 40-0 or 40-15 points as both a server and returner. Cilic is that rare example in the current era of men’s tennis: an unheralded, upset-crazy, bracket-busting force who didn’t just unleash his A-game in one match en route to a major title. He found that A-game against Berdych and maintained it through three end-stage matches of this tournament.

Here’s the money line about this match, whose statistics can be found here: It was won by the winner more than it was lost by the loser. This final was defined more by what the winner did well and less by what the loser failed to do. This was not a great match. It would grade out to a B. Yet, a “B” is an above-average grade. Nishikori received a C for a thoroughly average performance, but Cilic earned a straight A for his display on a cloudy day that was pierced by the radiance of his skills, harnessed so marvelously for a third straight match.

An above-average final? Men’s tennis could have done a lot worse. A lot worse. 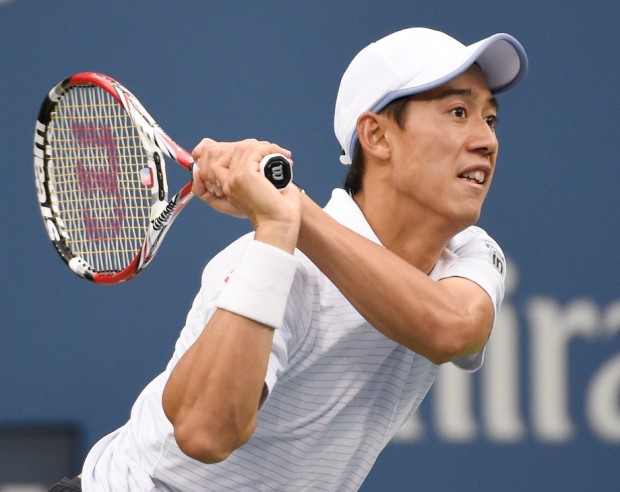 It was entirely reasonable to expect both Kei Nishikori and Marin Cilic to falter under the weight of the occasion on Monday evening. Nishikori just couldn’t summon his best tennis, but that doesn’t make Cilic’s performance any less excellent.

Here’s the question a lot of people are asking, as Cilic joins Stan Wawrinka as a first-time major winner on the ATP in 2014: “What changed everything for Cilic?”

Tennis commentator Chris Fowler raised this question in an indirect way after the match had ended:

Indeed — the fourth-round match between Cilic and Gilles Simon last Tuesday was entirely typical and expected. It was the kind of long and drawn-out five-setter that becomes a five-setter only because neither man is good enough to sustain a high level for a long period of time. Cilic has been caught in many of these matches over the years, and so even though he survived Simon, there was no truly good reason to think that he could threaten Federer in the semifinals. He had defeated Berdych at Wimbledon, so a quarterfinal victory over the Czech was entirely realistic… but Federer? In the thin air of a major semifinal? After the Swiss saved two match points against Gael Monfils in the quarterfinals and had to be feeling confident about his competitive resolve?

It’s quite the turnaround.

For insight into how Cilic pulled off this feat, consider what he told Mary Joe Fernandez of CBS (which ended its 47-year run as the main television rightsholder for the U.S. Open, handing the baton to ESPN next year) after the match:

“The joy on the tennis court is making me more relaxed,” Cilic said, a reference to the fundamental change coach Goran Ivanisevic has brought to his methods.

It’s counterintuitive to hear the word “joy” associated with Ivanisevic, because anyone who remembers the flamethrowing server who won Wimbledon in 2001 and reached four Wimbledon finals overall knows that Ivanisevic was a fiery, complicated person. He found his share of happy moments, but Goran — a man of many moods and faces — did not strike fans in the 1990s and early 2000s as “joyful.” He did relish competition, so in that sense the “joy” angle carries a degree of resonance. However, the Croatian coach of a new Croatian major champion could so easily and quickly descend into darkness.

It seems that Ivanisevic, now on the other side of the coach-player relationship, has himself acquired wisdom and an ability to identify what kept him from being more successful as a player. (If you’ve made four Wimbledon finals over a span of nine years, you’re a pretty darn good player. Yet, Ivanisevic did not make the finals of any other major tournament.) He has been able to convey that wisdom to Cilic, and his student — admiring and respecting Ivanisevic — has been receptive to the input.

Why did that not seem to take root until the Berdych quarterfinal, though?

Consider this element of bracketed tournaments:

It’s a very familiar story — in one round, a player (or team) is expected to win so much that he/she/it plays with fear, cautiousness, worry, or all of the above. Being expected to do well often weighs down an athlete. However, once that kind of match is successfully survived, the same athlete — in the next round, perhaps playing with house money — loosens up and embraces the moment as an opportunity to do something special. The combination of Ivanisevic’s advice and Cilic’s ability to get through that marathon against Simon in the round of 16 created the perfect mixture of what could be called “conceptual confidence” (trust in Goran’s game plan) and “situational confidence” (moving through the early rounds of the tournament, to the point that there was no longer anything to lose).

With the sole exception of the 2010 Australian Open, Marin Cilic entered this U.S. Open without a single win in a major quarterfinal. He previously wilted in major quarterfinals when he reached them. He lost a two-sets-to-one lead to Novak Djokovic in this year’s Wimbledon quarters. He memorably lost a 5-1 lead in the second set to Andy Murray in the 2012 U.S. Open quarters, having been so close to a two-set lead and a stranglehold on that match. (Murray went on to win the tournament, only adding to Cilic’s sense of “what might have been.”)

Perhaps, when Cilic conquered that lingering quarterfinal demon, something inside him — and Goran, that someone outside him — convinced Cilic that he could continue to play his best and no longer dwell on the ghosts of past failures. If those ghosts wanted to re-enter Cilic’s mind in this U.S. Open final, the 25-year-old never really opened the door to them.

Instead, Cilic stepped through a different sort of threshold and into an entirely new room: the one where major singles champions live.

Let that image Marinate for a moment.