Want to start a good, old-fashioned war among tennis fans?

The above terms have many connotations, some of them good, most of them bad, especially “ball-basher,” “wall,” “pusher,” and “servebot.” Tennis players come in many forms, and what’s more is that you’ll likely get 10 different responses if you ask 10 people to write at least 200 words about the ingredients that make:

A) a tennis champion;

or B) the secret sauce which inspires them to like a particular player.

You’ll get some similar components, but if you ask most tennis fans for deeper explanations of why they gravitate to certain kinds of players, you’ll receive increasingly more distinctive portraits.

The fan wars that erupt on Twitter and tennis blogs have some rather clear lines of demarcation, though if you make enough specific player-by-player comparisons, the lines can blur. As far as clear and evident contrasts go, the Serena Williams-Maria Sharapova/Victoria Azarenka clashes and the Federer-Nadal holy war are the products of various forces, but at heart, they represent the contrast between the shotmaker and the scrapper.

I use the term “scrapper” because the more familiar term “fighter” is a term that Serena’s fans quite understandably think should not be ceded to Sharapova or Azarenka. That point is well-made and taken. It’s also true that Federer, while more “artist” than “street tough,” is certainly a better-than-average (and, moreover, better-than-merely-good) fighter. Recent remarks by Jon Wertheim of Sports Illustrated, though reasonable in their intent, failed to fully grasp this point at its core. The incomplete, not-fully-accurate nature of Wertheim’s commentary led to a spirited response from readers.

As explained above, you’ll get a considerable degree of variety in responses from tennis fans if you ask them to talk about the characteristics that make them root for a player. This is reflective not of some flaw in a thought process; no, it’s merely a manifestation of what we know to be true: People are different.

For this reason, the following statement should not be seen or interpreted as some kind of pronouncement of a supposedly objective truth; it’s simply the broadcasting of one person’s opinion, an opinion that’s meant to be wrestled with as the Roland Garros women’s singles final approaches tomorrow afternoon in Paris:

It is true that, as found in the forms of both Serena Williams and Roger Federer, performing well — hitting gorgeous shots under immense pressure — can reasonably be viewed as displaying great “fighting spirit,” focusing one’s energies in a moment of crisis or, at the very least, tension. Similarly, it is also true that the likes of Maria Sharapova and Rafael Nadal (or Victoria Azarenka and Novak Djokovic) uncork plenty of impressive shots in the process of digging deep to win protracted battles in major tournaments. Among elite tennis players (and elite athletes in just about any sport), there is always — and necessarily — a mixture of top-tier performance and top-tier competitive quality. There is always and inevitably a blend of shotmaking prowess and naked, desperate resilience. Let’s allow that point to exist throughout this discussion and any future attempt to build on it.

Yet — and this is where we cut to the heart of the chase in the women’s tournament at Roland Garros 2014 — it does not seem improper or unfair to say that when Sharapova faces Simona Halep on Court Philippe Chatrier at roughly 3:11 p.m. Paris time, a battle between a top-tier competitor and a top-tier performer will commence. 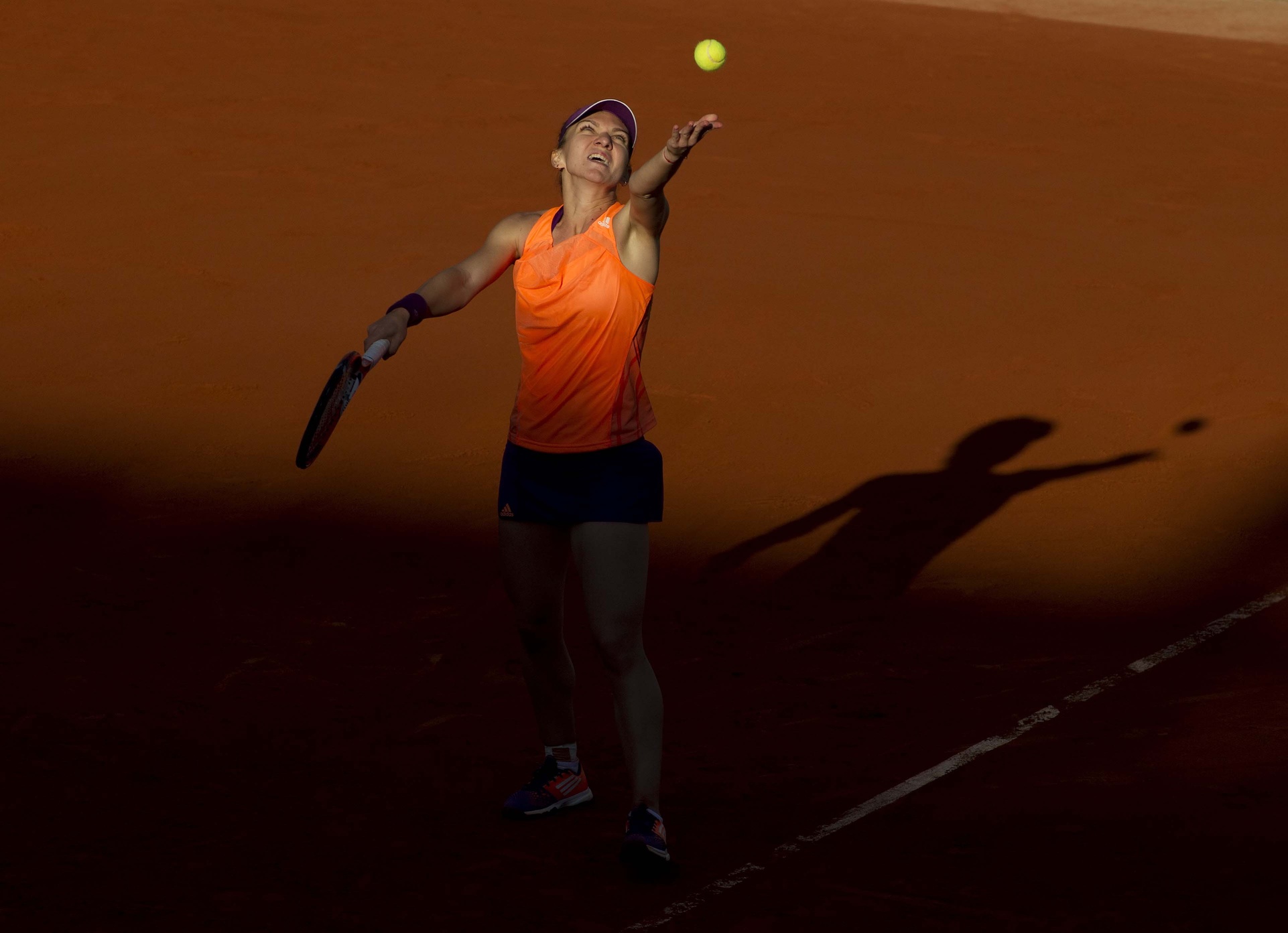 Simona Halep has emerged from the shadows not just in 2014, but over the past 12 months. Saturday, she will try to refute the notion that playing in one’s first major final represents an occasion far too powerful for a young player’s nerves.

Everything that’s been said above is meant to ensure that Sharapova and Halep are not put into tidy little boxes that say “fighter” and “shotmaker,” because they’re much more than those labels. Sharapova produced a brilliant return early in the second set of her Thursday semifinal against Eugenie Bouchard, the kind of shot that — after a flat first set — announces to her opponent that she’s in for the long haul, a three-set cage match. Sharapova does perform well under pressure — you don’t win as many three-setters as she has without doing so — but it’s much more accurate to say that she competes well under pressure, holding herself together between the ears against anyone not named Serena or Azarenka.

Sharapova lives for competition. It’s expressed in how she gathers herself after every point, how she yelps after every shot, how she reacts to every outcome. Whether or not this is attractive is something for each tennis fan or television viewer to decide in the realm of the heart and mind, but the competitive quality of Sharapova is beyond dispute. This is the heart of who she is as a tennis player.

We’ve seen shotmakers and big hitters go up against Sharapova, one by one, during the clay-court season and at Roland Garros in particular. One by one, they have won a set… and have simply not been able to take two. Christina McHale, Li Na, and Halep herself all felt the sting of a three-set loss to Sharapova in Madrid. Sharapova saw off Lucie Safarova and Ana Ivanovic a bit earlier in the clay-court season in Stuttgart.

Yes, Ivanovic beat Sharapova in Rome, but that was clearly a one-off result, a contention magnified and affirmed when Ivanovic meekly bowed out in the third round in Paris (to Safarova). Sharapova entered Roland Garros with a fresh mind and outlook. She has used that renewed view to outlast Samantha Stosur, Garbine Muguruza, and the aforementioned Bouchard — all formidable hitter-shotmaker types — in consecutive matches.

When Sharapova faces Halep, she’ll be creating a matchup that is aking to an Olympic figure skating competition in that it will be a contest in which “technical merit” and “artistic impression” will coexist in a delicate dance. Sharapova will be taking on the player who has left the deepest artistic impression on this tournament from the WTA side.  Halep’s serve has not been airtight in this tournament, and she definitely tightened up in the second set of her semifinal win over a reborn Andrea Petkovic on Thursday, but the Romanian star-in-the-making has been winning a lot of sets by 6-2 and 6-3 scores. She hasn’t lost a set in this event. She’s not only played up to, but has exceeded, her seeding in a tournament that discarded the top three seeds in the first six days of competition.

Sometimes, match analysis becomes a very complicated thing, and it could well become the case on Saturday. Sharapova might offer a level of resistance — and Halep a level of resilience — that could complicate the equation and present a path to victory laden with in-match nuances. However, before the first ball is struck, the layout of the battle is rather obvious: Halep must be able to do what Stosur, Muguruza, and Bouchard — and other shotmakers who have succumbed to Sharapova over three sets — could not quite achieve: She must absorb pressure — of the match and the larger moment — for more than one set.

It’s not easy to do, but it’s easy and accurate to say. There’s no sense in trying to get at this match from a different angle.

The theme of this Roland Garros tournament — like that of any Sharapova match on clay over the past three years which has not featured Serena on the other side of the net — is plain: Winning one set against Sharapova has as much value as the amount of points LeBron James scored after his cramp in Game 1 of the NBA Finals.

The instructive point about Serena Williams is that when she wins one set against Sharapova — on clay or anywhere else — Serena doesn’t view it as an achievement or as something improbable. Serena views winning a set against Sharapova as “part of normal business,” something she should expect to do and then continue to do. With Azarenka injured this year and not a fixture in the semifinals of Roland Garros on an annual basis (though she did go that far in 2013), it can reasonably be said that Serena is the only WTA player who, on clay, regularly holds her nerve against Sharapova. The mental complexion of a clay-court match pitting Sharapova against any other foe is not quite the same. Azarenka merits an in-between place here, because she believes she can persist in a war of attrition against Sharapova on any surface. Yet, only Serena has proven to be consistently superior to Sharapova on clay.

Very simply, then, Simona Halep — as far as she has risen over the past 12 months, especially but not exclusively within the confines of 2014 — has to deal with her credentialed opponent, the pressure of the occasion, and her own self on Saturday. She has to do so for more than a set. She has to train her mind to the point that she expects to hit the ball consistently and under duress.

We know Sharapova is going to fight and scrap and all those other verbs.

We don’t know how Halep will handle the stage.