The first week of a major typically concerns the undercard matchups and the floaters in the draw, the players who unexpectedly reach the second week. However, whenever a big name in the sport is knocked out of the bracket, that’s a headline development, and at the women’s Roland Garros tournament, we saw a number of highly-seeded casualties. The past week of results has paved the way for tennis’s most glamorous female athlete. Maria Sharapova shows all signs of being ready to conquer red clay for a second time in Paris.

They’re not Arantxa Sanchez-Vicario and Conchita Martinez (both major champions), but Carla Suarez Navarro and Garbine Muguruza have both managed to reach the quarterfinals at the same major. Suarez Navarro needs to win her Tuesday quarterfinal against Eugenie Bouchard in order to have a fully successful Roland Garros, but when the performances of Suarez Navarro and Muguruza are put together, it can already be said that Spain’s performance in the women’s tournament has exceeded expectations.

The Czech has a big game, but not a consistent one. The longstanding knock on Safarova is that while she has been able to threaten high seeds at majors, she hasn’t been able to finish the job on most occasions. (It’s an understatement of her problem, but there’s no need to embellish the truth of an “almost” kind of career.) Safarova’s struggles in tennis were most powerfully revealed by the fact that when she entered Paris, she hadn’t made the second week of a major since 2007.

That’s all changed after her third-round win over Ana Ivanovic on Saturday.

Can this result enable Safarova to breathe more freely and become more of a contender on the WTA Tour? Only time will tell, but this showing in France at least gives her the hope of a more successful career. At 27, she still has a window of a few years in which she can realistically do some damage.

Who’s the only WTA singles player with an active streak of six straight fourth round-or-better results at the majors? It’s the same player whose non-major results leave so much to be desired. Is it a tired subject to some? Surely. Yet, it’s the kind of reality that simply can’t be avoided, for better or worse. Stephens is making a good bit of money by maxing out at the majors. Yet, tennis fans and analysts are waiting to see week-in, week-out consistency from an athlete with a lot of potential.

It owned its moments of madness. It was predictable in its volatility and its lack of a straightforward, easy-to-contain narrative. However, two of the best natural ballstrikers in women’s tennis — players with immense instinctual talent (albeit not accompanied by supreme mental fortitude, the main shortcoming for each competitor) — put on a really good show for the Parisians who either ate lunch early or (more likely) delayed their lunch for this midday match on Saturday.

Petra Kvitova revealed a deft touch at net and showed more intensity than usual, trying to will herself through an injury to the finish line. She almost got there. However, this was a rare day in which her opponent, Svetlana Kuznetsova, did not relent at the first sign of adversity.

The two-time major champion — on the court, a player with a career eerily similar to a fellow Russian, two-time major men’s champion Marat Safin — came perilously close to defeat in a riveting third set, but whenever match pressure intensified to the extent that Kuznetsova had no real margin for error, she persevered. This hasn’t marked most of her career, but when Kuznetsova maintains an appetite for battle, her ownership of a full arsenal of shots can carry her through any situation. The Russian fended off Kvitova, 9-7 in the third. It was the best women’s match of week one at Roland Garros.

The Taylor Townsend story rippled through the American tennis world this past week, as a player with a highly attractive game began to show what is possible in her career, which is only just beginning.

Ranked 205th entering this tournament, Townsend was not handed a wild card into this tournament — it’s important to make that distinction for this 128-player event. Townsend earned her wild card by winning a U.S. Tennis Association (USTA) qualifying event. Having created this opportunity for herself, Townsend — only 18 years old — did not figure to be ready to handle what was, in essence, a second-round “road match” in France against native daughter and No. 20 seed Alize Cornet.

Townsend blasted and volleyed her way to the first set and a 4-1 lead in the second, but when the pressure of the moment and the crowd both became more intense, Townsend wobbled, and as a result, Cornet was able to win five straight games to take the second set, 6-4. It was logical at that point to think that Townsend was in trouble, but she instead pulled off the highly impressive feat — at age 18, remember — of mentally regrouping. A large dose of tunnel vision gave Townsend the clarity with which to take a big lead and then serve out the match at 5-4 in the third. The 6-4, 4-6, 6-4 win shows what’s possible at the outset of what could be (not will be; could be — let’s show a bit of restraint at the moment) a highly productive career.

The Milos Raonic story in men’s tennis has been matched, if not exceeded, by what Eugenie Bouchard has been able to do for Canada in women’s tennis. A surprising semifinalist at the Australian Open, Bouchard is one match win away from a second straight major semifinal after rolling through eighth-seeded Angelique Kerber in the fourth round on Sunday.

In six years, when Serena Williams likely won’t have much left in the tank, and Maria Sharapova will find it harder to play her defense-first game, Bouchard might very well be able to become a top player in women’s tennis. That remains to be seen, but her window of WTA opportunity appears to be larger than what Raonic can expect on the ATP Tour. At any rate, the rapid progress Bouchard has made in 2014 suggests that her career is not just on schedule, but ahead of schedule… at least if she can continue to be this consistent at the majors. 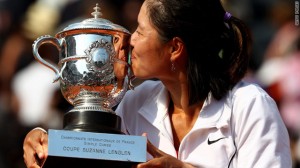 Remember when Li Na conquered Paris to become the first Asian player by nationality (though not ethnic origin, courtesy of Michael Chang in 1989) to win a major? It’s still hard to believe Li crashed out of the 2014 Roland Garros tournament in round one a week ago.

The Li Na experience is a rollercoaster, but in the early months of 2014, there had been signs that the world No. 2 had begun to steady herself a little bit. A steady stream of quarterfinal-or-better appearances bolstered the notion that Li was ready to become a regular force on tour, not just an occasional one. However, her first-round loss to Kristina Mladenovic swiftly and abruptly undercut that very notion.

Li is an historically and culturally important figure in modern tennis, given that she’s lent a presence to the sport in China in the early 21st century. She will always be seen as a courageous individual and a champion. Yet, a first-round loss such as this one will remind tennis fans that as delightful a person as she is — a point amplified in this piece by the terrific Lindsay Gibbs of Bleacher Report — the world No. 2’s career could actual-Li be even better. Setbacks such as this one have to be weeded out for good.

The non-Serena, non-Sharapova competitor with the most to gain — and lose — at this tournament clearly ended up on the losing side of the equation. Ivanovic’s third-round loss to Lucie Safarova, documented here at Attacking The Net, represents a substantial disappointment for her career and for the legacy she still hopes to attain.

As is the case for Roger Federer on the men’s tour, Serena Williams doesn’t have to prove anything more to the tennis world. She only has to prove whatever she wants to prove to herself. Yet, with Maria Sharapova in her quarter of the draw, Serena’s performance in the first four rounds of this tournament held the key to the outcome of the whole event. Her loss to Garbine Muguruza is precisely what makes the next item on the list so important and central to this fortnight at Roland Garros:

It is usually (though not always) the case that a run to a major title requires one escape over the course of seven matches. Maria Sharapova, freed from the prospect of having to play Serena Williams in the quarterfinals at this event, was in danger of failing to reach the quarters on Sunday evening. Down 6-3, 4-3, and love-15 on her own serve, Sharapova was caught out of position in the middle of the court, having tentatively shoveled a nothingburger forehand to Samantha Stosur’s backhand side. Stosur merely needed to hit a solid, no-fuss regulation backhand down the line, and Sharapova would have had to dig out of a love-30 hole, with Stosur on the verge of being able to serve for the upset.

Stosur wildly missed that backhand, however, and two points later, at 30-all, Stosur sent a soft Sharapova second serve into the middle of the net. Sharapova escaped that dangerous game… and she didn’t lose a single game the rest of the way. Stosur, a hugely talented player — one good enough to have a major title to her credit — is known for implosions and an alarming lack of mental toughness. Even by her standards, though, this collapse rated as one of her worst. Sharapova won’t mind — she has endured the sobering, splash-of-cold-water experience that generally lifts a player of her caliber through the two-week gauntlet of a major… especially since that gauntlet doesn’t include Serena or Victoria Azarenka.