American fans will tell you that tennis is treated much more poorly on U.S. television than other major sports, including and especially golf, the other main solo-athlete sport in this country. What are the moments (not industry realities, but live on-air occurrences) that have stayed in the minds of American tennis viewers?

Tennis Channel has been a godsend for American tennis fans. The network dedicated to tennis has massively upgraded the sport’s visibility on the tube. Yet, for all the good things this network has done, it still fails to get one thing right at times during the majors: It insists on showing its pundits talk at an anchor desk while live tennis is unfolding.

Last year at Roland Garros, viewers were treated to a sexy (on paper, at least) quarterfinal between global icon Roger Federer and a stylish, big-hitting challenger, Jo-Wilfried Tsonga. The match didn’t live up to the hype, with Tsonga cruising in straight sets against a flat Federer. However, American television viewers missed Tsonga’s breaks of serve at the beginning of the second and third sets. Tsonga took control against Federer in each of those sets while Tennis Channel showed its pundits talking about the previously concluded sets.

CBS had carried the Miami finals for several years. Sometimes, the Miami final coincided with Final Four weekend, meaning that programming slots on a vacant (basketball) Sunday were not an issue to be dealt with. On this weekend, however, the Miami men’s final was on the same day as a regional final doubleheader in the NCAA tournament. In the attempt to adjust to this reality, CBS bumped up the start time of the Miami final a little bit earlier than it had in the past. However, as can be the case when two consistent baseline grinders clash, a match can have long points and long sets, spilling over a two-hour, 30-minute time window. This is exactly what happened in a match between David Ferrer and Andy Murray, two players in the top five of the ATP rankings at the time. Ferrer and Murray fought their way into a third (final)-set tiebreak after more than two and a half hours.

At that very moment, the tip-off of the South Regional final between Michigan and Florida was just minutes away. Yes, CBS should have started the South Regional final a little bit later, at 3 p.m. Eastern (maybe 2:45), instead of the normal 2:20 p.m. slot for the first regional final on that Sunday of the NCAA tournament. That was the ultimate solution to this problem, one that could have been arrived at well in advance. The following regional final (the Midwest) could have tipped at 5:20 or 5:30 instead of 5:05. The 60 Minutes program could have survived, one would think, especially since it comes on at roughly 7:30 Eastern time during much of the NFL football season.

However, in light of the fact that CBS didn’t plan ahead, it should have been able to stick with roughly five more minutes of tennis, given that the tiebreaker was going to resolve the match’s outcome, one way or the other. It’s not as though this match had a chance to provide an 18-16 third set. The tiebreaker promised a relatively quick conclusion. Viewers expecting basketball might have missed the first three or four minutes of Michigan-Florida, and nothing more.

Adults in CBS offices should have been willing to stick with tennis.

Instead, continuing the network’s not-so-distinguished handling of main-event tennis in recent years, Black Rock decision makers opted to switch the match to Tennis Channel at the start of the tiebreaker.

Just think about that for a second: A network carried two and a half hours of taut, contentious tennis… only to then bail on the event with the conclusion no more than 12 to 16 points away, a matter of no more than 10 to 12 minutes, if that.

Let’s also mention this: It would be one thing if a niche cable channel such as Tennis Channel passed the baton to CBS, thereby increasing exposure to a match for viewers. However, a CBS-to-Tennis Channel handoff substantially DECREASED the level of TV availability for the match. Do other sports get treated quite like this in America?

ESPN has improved its coverage of the majors, especially at Wimbledon. ESPN and ESPN2 have learned to cover separate courts during the second week of the tournament, committing broadcast hours to two channels instead of only one. This is how tennis majors should be covered, and we’re waiting for ESPN and ESPN2 to use this two-pronged television strategy at the other three majors.

In light of that background, however, it’s therefore painfully ironic that in 2013, ESPN failed to cover the ladies’ singles semifinals properly.

ESPN and ESPN2 use the split-channel coverage model during the fourth round and the quarterfinals, when there are showcase singles matches on separate courts, Centre Court and Court 1. However, when the semifinals (both played on Centre Court for each gender) arrive, the need for the split-channel model is no longer supposed to exist.

There was just one problem: The Bryan brothers, Bob and Mike, were playing a men’s doubles semifinal. Coverage was available through an online stream on ESPN3, so that should have been sufficient for ESPN. However, the WorldWide Leader opted to show extended portions of the Bryans during the close, contentious and exciting ladies’ semifinal match between Sabine Lisicki and Agnieszka Radwanska. (Lisicki won the match, 9-7 in the final set.) ESPN could have simply set aside an ESPN2 broadcast window for the Bryans, but since that window wasn’t established in advance, ESPN3 needed to suffice for men’s doubles. Pre-empting a major singles semifinal for a doubles match is an appalling (and unforced) error by a tennis broadcaster, period, end of sentence.

The underlying reality behind this awful snub of WTA tennis is as follows: Lisicki was not a household name, having upset Serena Williams earlier in the tournament. Moreover, the Bryans were household names for American viewers. Had Serena been playing in that ladies’ semifinal instead of Lisicki, the match with Radwanska would not have been treated the way it was. Similarly, if the Bryans had not been playing in the men’s doubles semifinals, the ladies’ match would have been shown in its entirety.

This incident showed just how much the non-Tennis Channel American tennis broadcasters are captive to the idea that showing superstars (and if American, so much the better) is the way to cover a tennis tournament if competing matches occupy the same time window. This is precisely the sort of thinking that American tennis fans cannot stand. What’s more is that women’s tennis fans had a right to feel particularly wronged in this case… because they were. 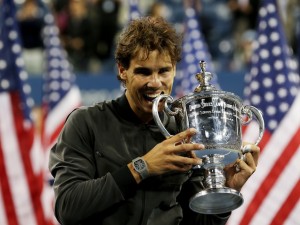 Rafael Nadal entered a small, select group of tennis legends by winning the career Grand Slam at the 2010 U.S. Open. The trophy ceremony should have been a pretty big deal, but ESPN2 simply couldn’t wait an extra handful of minutes in the face of the mighty NFL. Multiple examples from this list show that major American networks — when faced with a choice between giving tennis 10 extra minutes of air time and moving to other, more lucrative programming — regularly fail to give tennis those 10 extra minutes. It is in these moments that the sport and its fan base are humilitated to the fullest possible extent.

This collection of viewer e-mails tells the story of the way in which CBS and ESPN bungled their handling of the rain-delayed 2010 U.S. Open men’s final between Rafael Nadal and Novak Djokovic. The brief overview is here: The match was passed from CBS to ESPN2 after the rain delay so that CBS could televise Monday night sitcoms. ESPN2, which had a late-night NFL doubleheader game to air, carried the remainder of the match but then needlessly pre-empted Nadal’s trophy ceremony before the NFL game had actually begun.

This was the night when Nadal won the U.S. Open for the first time, thereby achieving the career Grand Slam. This was a trophy ceremony to be treasured and savored. Yet, ESPN2 couldn’t stick with it for five or six minutes, before an NFL game began. ESPN2 moves back college basketball and college football start times without too much of a problem, buying anywhere from five to 12 extra minutes when a game in the previous time window runs long. Yet, ESPN2 was unable (or unwilling, or both) to push back an NFL game five minutes to ensure that a seminal moment in tennis history could be seen and appreciated by American (and many Canadian) viewers.

Let’s meet ESPN2 halfway here: If a journeyman player (say, 2001 U.S. Open semifinalist Sjeng Schalken) won the tournament, the trophy ceremony could be moved along, and a large concentration of viewers wouldn’t mind too much. This, however, was a night in which one of the game’s greatest players achieved something only a handful of other men have ever been able to do.

Would a Tiger Woods trophy ceremony get pre-empted?

You know the answer to that question.

Dick Enberg, one of the great voices in the history of American sports television – very much including the sport of tennis, given his many years of great work at Wimbledon and Roland Garros with Bud Collins – took the fall for this incident, but it was really the fault of CBS executives and the production truck in New York.

Tennis fans and some casual sports fans will recall that in 2009, Enberg rushed the new U.S. Open champion, first-time major winner Juan Martin del Potro, through the trophy ceremony at Arthur Ashe Stadium. This wasn’t due to Enberg’s coldness, though; few sportscasters are as warm in their relationships with athletes as Enberg has been. Few men have shown a deeper love for the games they cover than Enberg, the author of a one-man play about his beloved friend and former broadcast partner, late Marquette basketball coach Al McGuire.

Enberg the person wanted del Potro to bask in the glow of the moment. The CBS truck, though, taking a cue from CBS brass, wanted to get Monday night sitcoms on the air. The fact that del Potro wasn’t a fluent English speaker only made the ceremony more awkward, embarrassing American tennis fans who saw their national tournament cover itself in disgrace.

Yet, the damage was done… to a sport’s television reputation, and to a ceremony that should have been remembered for so many good reasons instead of a bushel of unpleasant ones.