Novak Djokovic, pictured above, is the odd man out in Friday’s Wimbledon gentlemen’s singles semifinals.

At age 27, Djokovic is neither the old man Roger Federer is, nor is he part of the “young gun” generation led by Grigor Dimitrov and Milos Raonic. For the most part, Wednesday’s quarterfinals at Wimbledon — which followed victories by Simona Halep and Eugenie Bouchard in the last two women’s quarterfinals — offered a striking mixture of age and youth. What was and is fascinating about these men’s matches is that they gave tennis fans a different set of responses to the pressure of second-week competition at the most prestigious tournament in the sport.

Let’s tick off the ages of the men’s quarterfinalists: Federer is one month short of his 33rd birthday. His opponent in the quarters, Stan Wawrinka, is 29. Dimitrov and Raonic are both 23, Andy Murray and Djokovic both 27. Djokovic’s quarterfinal foe, Marin Cilic, is 25. Raonic’s quarterfinal opponent, Nick Kyrgios, is 19.

When you look at those age numbers, it stood to reason that Djokovic, still in his prime — though certainly not at his peak the way he was in 2011 — would find a way to sort out his game and get past the mentally frail Cilic at some point. That point didn’t come until the start of the fifth set, but with a day of rest ahead on Thursday, Djokovic really doesn’t need to worry about his physical fitness. Stamina is his middle name these days.

It also figured that Raonic, though never before a quarterfinalist at Wimbledon, would be able to wear down Kyrgios, who had to take the court roughly 24 hours after finishing off Rafael Nadal in a match that was mentally draining… and not quite a walk in the park physically. Raonic — a far tougher and steadier player this season under the guidance of coach Ivan Ljubicic — didn’t waste the opportunity to advance in the draw with Nadal out of his way.

The two men’s quarterfinals which offered far more complex psychological portraits came in the Centre Court matches, not the matches on No. 1 Court. Murray, not only a veteran but also the defending Wimbledon champion, was supposed to have been able to fend off Dimitrov, who was making his first quarterfinal appearance at SW19. Following that match, logic suggested that Federer would get by due to current form and the fact that his good friend and opponent, Wawrinka, had never reached the semifinals of Wimbledon.

Ultimately, these two matches both shared one important characteristic; otherwise, they flowed in markedly divergent paths. 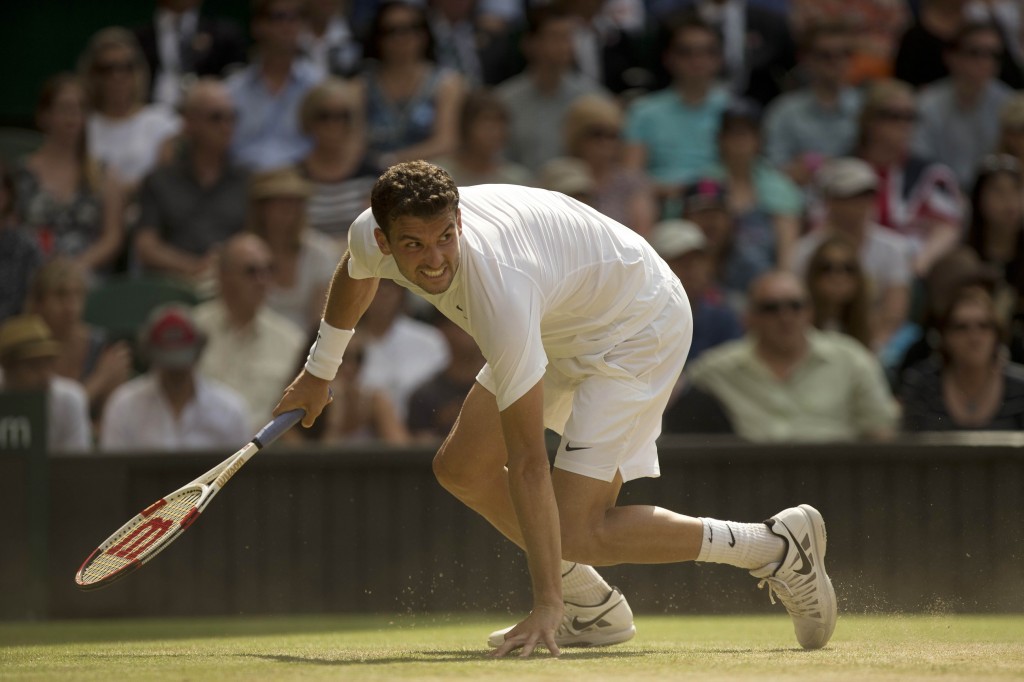 On several occasions Wednesday, Grigor Dimitrov stumbled, only for Andy Murray to miss a routine groundstroke on the next shot or the following one. These stumble-and-miss sequences, with Murray losing focus, characterized the surprising result in its entirety. The surprise, to be clear, wasn’t necessarily the Dimitrov victory, but how easy it ultimately was.

What was surprising about Wednesday’s second-set tiebreakers was not found in the results so much as the way in which the results were forged. Through the first seven or eight points in each of these tiebreakers, all four men — Federer, Wawrinka, Murray, and Dimitrov — made nervous errors and showed how much the weight of the moment rested on their shoulders… and legs… and minds. These two tension-soaked dramas came down to a collection of two to four points, such a small margin for so decisive a shift, one way or the other.

At the ends of these tiebreakers, the old man with the experience came through… and the young man with no prior experience in a Wimbledon quarterfinal also answered the bell. In this sense, familiarity with pressure didn’t mean everything. Similarly, championship credentials didn’t prove to be uniformly decisive. Federer rose, but Murray faltered. Dimitrov overcame nerves, but Wawrinka — having won the 2014 Australian Open — couldn’t build on a marvelous performance through most of the first two sets against his Swiss compatriot. These two second-set breakers sent mixed messages that will carry into Friday’s semifinals.

So much of the Murray-Dimitrov match cut directly against expectations. Instead of Murray — the proven and tested championship player — performing within himself and forcing Dimitrov to come up with special shots to beat him, the defending Wimbledon champion rolled balls back, hitting routine rally shots without pace, placement, or spin.

Murray came up short at the majors before his 2012 U.S. Open breakthrough (and in his 2013 Wimbledon title) because his forehand wasn’t strong enough. In this match, Murray’s forehand looked a lot like it did in 2011 and 2010, not in 2013. This was never more apparent than on the tenth point of the second-set tiebreaker.

Down 4-5, Murray cautiously guided the ball into the middle third of the court, eschewing down-the-line groundstrokes that were available to him. Murray consistently shied away from down-the-line shots in this match, and that approach enabled Dimitrov to comfortably slice and change pace from the middle third of the court. When Murray did this throughout the match, he usually suffered, but at 4-5 in a second-set tiebreaker, already down a set? Murray essentially tasted death on that point. Dimitrov, given wings by his win of the 5-4 point, snatched the second set on the next point at 6-4. Murray then went away meekly in the third, throwing in a not-even-close double fault to concede a break before Dimitrov coasted to the finish line.

Murray will lose 1,640 ATP rankings points as a result of this loss (2,000 points for winning Wimbledon last year, compared to 360 for a quarterfinalist result this year). That’s surprising enough, as is the fact that he’ll be No. 10 (yes, ten) in next Monday’s standings. However, what was much more shocking about his straight-set loss to Dimitrov — a routine loss, if we’re being brutally honest — is that Murray shed something much worse than rankings points on Wednesday: his aggressiveness.

Don’t blame Dimitrov for what Murray failed to do. Though relatively new to the pressure of late-stage tennis at a major, Dimitrov carried himself with the composure that was missing in his first major quarterfinal in January at the Australian Open against Rafael Nadal. Dimitrov being calm and Murray being passive? It was not what Great Britain hoped for, but it’s exactly what the locals witnessed on a deflating early-July afternoon. 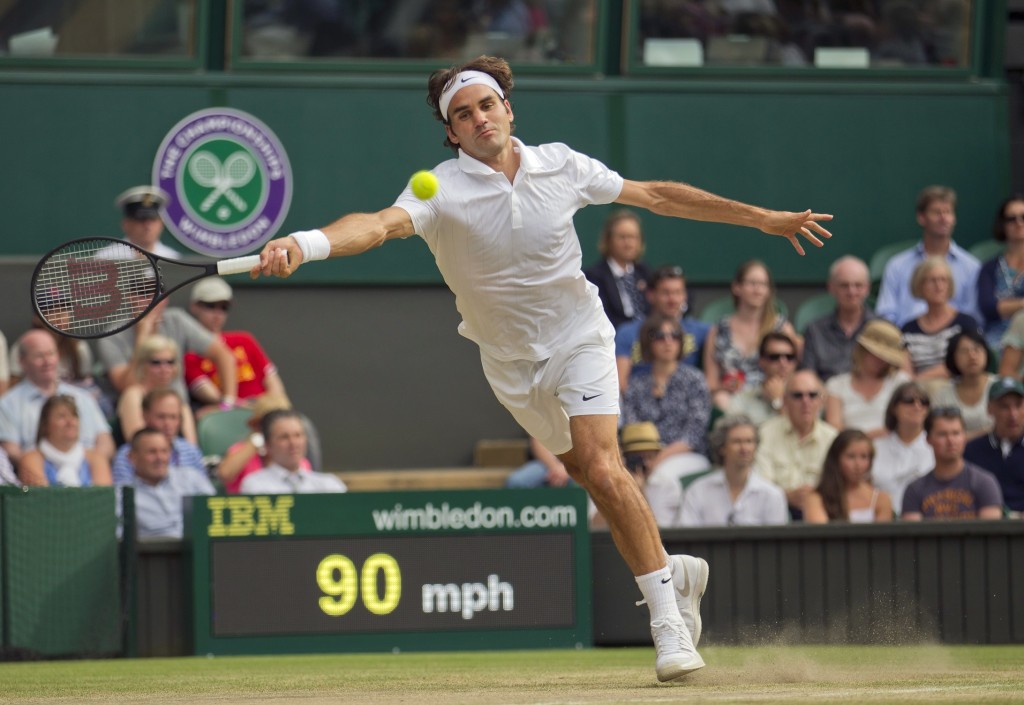 Roger Federer reached a ninth Wimbledon semifinal and his 35th major semifinal on Wednesday. Old-man nerves can be just as volatile as young-man nerves, and that tension will be something to watch in Federer’s semifinal against Milos Raonic on Friday.

Like Murray, Roger Federer did feel the weight of a big-stage match, but he felt it in different ways, at times showing a level of composure that saw him through, and at times showing too much tension precisely when he was near the finish line.

Federer first mastered the tiebreaker he had to take. He straightened out his serve when leading 4-3 (up a mini-break) in the second-set breaker. Wawrinka held his next two service points to get to 6-5, but Federer — inspired by consultant Stefan Edberg (Severin Luthi is his primary coach) — approached on a second serve at 6-5. He received a chipped return of serve that floated a bit. Federer was able to knock off the forehand volley to level the match at one set apiece.

Since Wawrinka — due to Wimbledon’s refusal to play on Middle Sunday — had played matches each of the previous two days, Federer’s ability to win that second set and tie the match forced Wawrinka to play a minimum of four sets to take the match. With Wawrinka experiencing a degree of physical distress (apparently an upset stomach; he received a visit at his chair and put some powder in his sports drink), it’s clear that the reigning Australian Open champion had to take this match in straight sets. Once Federer escaped with the second, the likely result could be seen from a mile away.

It’s true that Federer — near the finish line in his last two service games of the match — began to wobble in the face of the realization that he knew he was close to another Wimbledon semifinal. Serving up 4-3 and 5-4 in the fourth set, up two sets to one, Federer’s mind absorbed some of the anxiety of the moment instead of remaining empty and uncluttered. His first serve began to desert him, and he faced break point in the 5-4 game. Fortunately for him, an erratic Wawrinka could not calibrate the groundstrokes that were so airtight in the first two sets, especially the opening one. Federer received additional chances to get to an ad (game) point instead of facing additional break points. Given that small degree of safety following his break-point save, Federer finally hammered two first serves to finish the job on his fifth match point.

The fact that Federer’s nerves became so conspicuous at the end of the match made his second-set survival act that much more noteworthy. For a person in a physical prime (age 26 or 27), having a few years on an opponent is an advantage. For Federer, experience might be a plus against a teenager or a newbie to the scene, but on many occasions the past few years, an older mind has betrayed him instead of helping him. It will be fascinating to see if he is more settled — or more nervous — when he takes the court against 23-year-old Raonic in Friday’s semifinals.

What we have on Friday are two semifinals between established members of tennis royalty — Djokovic and Federer — and two foremost representatives of the next generation in tennis, Dimitrov and Raonic.

Will experience or youthful freedom win the day?

Based on Wednesday, your guess is as good as anyone else’s.