It’s a statement the French would readily agree with, but it’s also something tennis players would agree with as well. Winning the ATP Masters 1000 stop or the WTA Premier 5 event in Rome is certainly a nice prize to have, but it doesn’t hold a candle to the value of the French Open — better known globally as Roland Garros — which starts next Sunday.

In 2014, Attacking The Net — as a newborn tennis blog — will be devoted to covering the major tournaments, with only an occasional post during other points on the tennis calendar. “Roland Garros Preview Week” is upon us, and any look-ahead to Paris isn’t complete without first looking back at Rome.

Just what did this tournament tell us about the coming fortnight in the City of Light?

ATP: THERE’S NADAL AND DJOKOVIC… AND THEN EVERYONE ELSE

Never heard that one before, right?

The Indiana Pacers were questioned so many times over the past month. The Oklahoma City Thunder and San Antonio Spurs stood on the edge of elimination in the first round of the NBA playoffs.

No matter — all four of the best teams in professional basketball made it to the conference finals. Months of worries evaporated and gave way to a restoration of order.

It is the same with professional tennis, very much including the men’s side of the street.

Rafael Nadal lost to David Ferrer in the quarterfinals of the Monte Carlo Masters a month ago. His form was unmistakably patchy, much as it was in the 2013 Monte Carlo tournament. Nadal sorted himself out in 2013, but a year later, fresh doubts arose when Nadal admitted that he lacked “inside power,” a reference to motivation and inspiration.

Yet, Nadal — while not winning Rome — won three 3-set matches during the week and played quality tennis in pushing Novak Djokovic to a final set in Sunday’s championship match. There are no guarantees in life — ask Robin Soderling — but Nadal has dispelled many if not all of the doubts surrounding him heading into Paris.

Only an in-form Stan Wawrinka (by the way, he no longer wants to be called Stanislas — this is official) might have been able to do what Djokovic did: Stand up to Nadal’s relentless effort with heavy, powerful, precision hitting from both wings. Given that Wawrinka bowed out early in both Rome and Madrid after winning Monte Carlo, he’s obviously not an in-form player at the moment.

David Ferrer did make the final at Roland Garros last year, but it’s hard to deny the notion that such a laudable achievement was primarily the product of Nadal and Djokovic both being removed from his half of the draw. Ferrer is a contender at Roland Garros, but Djokovic had the right answers for the Spaniard in a well-played and contentious quarterfinal in Rome this past Friday.

Speaking of Djokovic, the questions related to the durability of his right wrist — an injury he aggravated in Monte Carlo after initially suffering it earlier in April — were wiped away in his run to the Rome title. A fit Djokovic is a nasty Djokovic, as Nadal re-learned (again) on Sunday. Djokovic peppered Nadal’s deuce (backhand) corner with vicious forehands, indicating that his wrist is ready to roll at Roland Garros, nicknamed “RollyG” by Andy Murray.

Once in a great while, upsets occur. Robin Soderling did beat Nadal in 2009. In 2011, Djokovic had a 43-match winning streak snapped by Roger Federer in Paris. Moreover, a body part here or there could be tweaked once the tournament begins. Anything can happen to change the nature of the landscape. Yet, after months of worry from both players’ fan bases, Nadal and Djokovic — who will thankfully be in opposite halves of the draw, unlike last year — have fully reasserted themselves as the favorites for this tournament.

Yes, the gap between Nadal-Djokovic and the rest of the men’s field is not as wide as it was in each of the past two years. That’s quite true. The odds of “the field” winning this title have risen, and that much is worth acknowledging.

Yet, have those odds risen enough to matter in the end? Probably not. 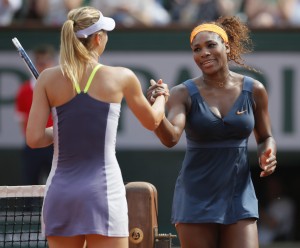 Can anyone prevent a Nadal-Djokovic final from happening at Roland Garros? The same kind of question will be asked on the women’s side as well: Can anyone get in the way of a “Serena-Pova” power pairing… if, of course, the two stars are placed in opposite halves of the draw?

WTA: SERENA, SHARAPOVA, OR A SHAKE-UP?

The women’s side of the Roland Garros drama that’s about to unfold has also been marked by a re-establishment of the power centers, albeit to a slightly lesser extent.

Serena Williams had to withdraw from Madrid with a strained thigh, but in Rome, she was more than fit enough to win. It’s true that she endured a two- or three-game lull in multiple matches during her week in Rome, but those dips in form never lasted for a full set. Someone will have to win two sets, not just one, against Serena in order to dethrone the reigning Roland Garros champion. With a week of rest, Serena should be fine as she prepares to defend her title.

Moreover, Victoria Azarenka — the one player on the WTA Tour who has consistently shown that she can stand up to Serena inside the painted rectangle — hasn’t played a match since Indian Wells in mid-March. Rehabbing from an injury, she has decided to skip Roland Garros. Azarenka’s next really good chance at a major title is in September at the U.S. Open, provided that her body will be ready by then.

Serena has to like her chances, as long as — yes, it’s a familiar theme in tennis — her body holds up.

If Serena is the favorite on the WTA side, Maria Sharapova is the obvious second choice and the instant new favorite if Serena gets knocked out early. Li Na has occupied the No. 2 spot in the WTA rankings the past few months, and the Chinese star was the last non-Serena opponent to beat Sharapova on clay (2011 Roland Garros semifinals) before Ana Ivanovic turned the trick this past Thursday in Rome. Li and Ivanovic both have enough “game” to win this tournament — no one in the tennis community would deny that claim. However, with Azarenka out of the mix, Sharapova is the second-toughest player in the field behind Serena. Sharapova is one of the toughest outs in tennis, a player who is minimally affected by losing the first set in a match.

Should Sharapova’s loss to Ivanovic in Rome be enough to change the calculus heading into Paris? No. Individual matches and non-major tournaments frequently draw excessive reactions from fans. Majors are different beasts, and it remains to be seen if Ivanovic — as well as she’s been playing this year, including the past month on clay — can put together five or six winning efforts in a row. Ivanovic hasn’t reached a major semifinal since the 2008 Roland Garros event (which she won).

What about a possible Sharapova-Li matchup? If the draw puts Sharapova and Li together in the quarterfinals or semifinals, Li would certainly have a good chance of winning. Li is the reigning Australian Open champion, after all. She’s also reached the quarterfinals or better at four of her past five majors. However, Li did not have to face a single player seeded higher than 20th in Australia. She made good use of the draw in Melbourne, but beating Sharapova on Parisian clay is unquestionably a harder task for her than it was in 2011.

Sports throw us curveballs all the time. Historic upsets such as Soderling over Nadal or Virginie Razzano over Serena (2012 Roland Garros) are memorable and substantial precisely because no one expected them. Maybe, just maybe, a titanic shocker will emerge once again on the terre battue of France.

You wouldn’t want to bet on it, though, would you?

The Roman Way turned out to be fairly straight, and nothing from Italy lent additional weight to the notion that the coming weeks in Paris will be unsettled at the very top of the mountain. You might get two surprising semifinalists for the ATP and WTA in Paris, but probably not three, and certainly not four. The first five rounds of this seven-round event at Roland Garros are indeed likely to be wacky, but when the crushed red brick settles, expect the heavyweights in women’s and men’s tennis to lift trophies.

We’ll see if the draw — announced this Friday morning in Paris — throws in a potential plot twist. Without looking at a draw sheet, though, this seems like a tournament in which the elites will be the ones left standing on June 7 and 8.