The Wimbledon ladies’ singles draw was announced Friday morning. Click on each quarter of the draw to see the full 128-player bracket, with 32 players in each quarter.

What stands out in the WTA portion of the 2014 Wimbledon bracket? As is the case with Novak Djokovic’s quarter in the men’s draw, it is as though Roland Garros is still being contested. There’s a lot of “French Open” at the All-England Club.

As longtime tennis observers know, the transition from the red clay of Paris to the lawns of suburban London is a quick one, with only two weeks separating these major tournaments on the tennis calendar. Next year, that two-week break becomes a three-week break, enabling the finalists at Roland Garros to physically recover while also giving the whole tours a little more time to mentally decompress from the clay season before attacking the grass. This year, however, the switch of surfaces remains as abrupt as it’s ever been. Therefore, the similarities found in the Roland Garros and Wimbledon draws will make it easier to identify two different tennis species:

A) players whose cames can and do translate to any surface;

B) players whose games (including the mental side, not just a specific technique or a collection of shots) are built for one surface more than another.

This simple question sums up so much of the Wimbledon draw: Will the successes and failures witnessed a few weeks ago in Paris play out again in England?

As was the case at Roland Garros, Maria Sharapova landed in Serena Williams’s quarter of the draw. In Paris, Serena didn’t make the quarters, opening up the bracket for Sharapova. It’s true that Sharapova is most at home on crushed red brick, but it seems reasonable to say that if Serena’s not there in the quarters — Eugenie Bouchard, who has made the semifinals in each of the year’s first two majors, awaits the younger Williams sister in the fourth round — Sharapova will have a great chance to make the final. That’s drama number one on the women’s side.

As you move through each subsequent quarter of the draw, the Roland Garros questions (and parallels) continue.

As in Paris, Simona Halep and Ana Ivanovic find themselves in the same quarter. As was the case at the French Open, Halep enters Wimbledon having pulled out of the most recent warm-up event as a precautionary measure to protect against the possibility of an injury. Halep was seen clutching her shoulder at the Topshelf Open in S-Hertogenbosch, The Netherlands. She also pulled out of Rome midway through that tournament. She obviously regrouped at the French Open; can she do the same at SW19?

If Halep is going to make yet another major semifinal and potentially face Serena Williams in what would be a blockbuster match (a semi with Sharapova would also rate as a main-event confrontation), she’ll probably have to get past either Ivanovic or defending Wimbledon runner-up Sabine Lisicki, who could face Ivanovic in the third round. Ivanovic was — if not a favorite — a fourth or fifth choice at Roland Garros. She actually carried some expectations into a major tournament for the first time in a long while. She lost 3-and-3 to Lucie Safarova in the third round, and as a result, she wants to have nothing to do with the notion that she’s any sort of favorite or leading contender at the majors.

Tennis is an alpha-dog sport. Champions relish pressure and love every opportunity to conquer it. Sharapova, for all the limitations in her game, takes so much pleasure from competition. She’s made a lot out of her career despite a serve that is all over the place and donates dozens of free points to opponents over the course of a match. Ivanovic does not relish the messiness of mental combat inside the pit and its painted rectangle.

Lisicki comes to Wimbledon without any momentum or anything in the way of encouraging results on other surfaces. However, this is not a new development. Last year, the German reached the semifinals or better in only two tournaments leading up to Wimbledon. Yet, despite that barren first half of 2013, Lisicki roared past Serena in the fourth round and made her first major final, losing to Marion Bartoli. It’s true that Lisicki had to retire from her round-of-64 match at Roland Garros, but she’s endured traumas at the French Open in the past, only to rebound at Wimbledon, by far her best major. One last note about Lisicki’s health: Does an injured player tweet this?

Here’s the bottom line with respect to this quarter of the draw: Halep and Ivanovic once again stand out, much as they did at Roland Garros. Yet, will Halep’s body and Ivanovic’s brain withstand the strain of a second major within a month’s time? 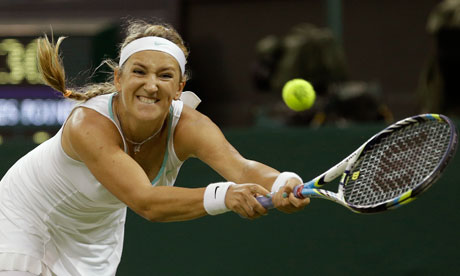 Everyone’s waiting to see what Victoria Azarenka will do in her first major tournament since the Australian Open. Azarenka missed the French Open due to injury. Realistically, Azarenka’s goal is to simply be ready for the summer hardcourt season. Yet, if she can move through her first two or three matches at Wimbledon, she might find enough confidence to make a deep run.

In the third quarter of the women’s draw, there’s another parallel with Paris: Agnieszka Radwanska falls into a relatively soft quarter. She dodged Sharapova at the French Open and had an opportunity to make the semifinals. However, she was ambushed by Ajla Tomljanovic in the third round. This year, Radwanska landed in Victoria Azarenka’s quarter. The head-to-head stands at 12-4 in favor of Azarenka, who returned to the tour during the grass-court season after missing three months with an injury suffered at the Indian Wells hardcourt event in March. Normally, the presence of Azarenka in her quarter would be bad news for Radwanska, but in this specific situation — with Azarenka just beginning to return to regular competition — Radwanska has to think that she received a decent draw. We’ll see if she can make use of it, unlike the French Open. 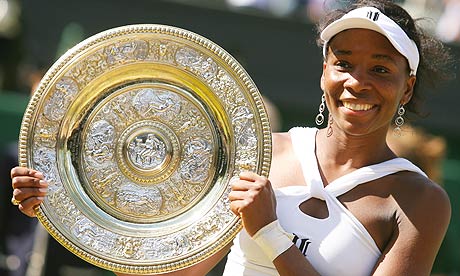 Venus Williams was supposed to face Serena Williams in the third round of the French Open, but couldn’t get that far. Can she create a main-event third-round match with Petra Kvitova, another former Wimbledon champion?

In the final quarter of the women’s draw, the Roland Garros parallels continue.

A few weeks ago in Paris, Venus Williams and Serena Williams were slated to meet in the third round, but neither woman reached that stage of the tournament. At Wimbledon, Venus could find herself in another high-profile third-round match: She has a chance to meet a fellow Wimbledon champion, Petra Kvitova. Will England do what France didn’t in 2014 — give women’s tennis fans a box-office crowd-pleaser in the third round of  a major tournament?

Beyond the Venus angle, Sloane Stephens — who made the fourth round at Roland Garros — is similarly poised to make the second week of a major once again. Stephens has reached the second week (defined in bracketological terms as the fourth round or the round of 16) in six straight majors, the longest active streak on the women’s tour. Plenty of fans will yell, “DON’T JINX IT! DON’T JINX IT!”, but let’s not deny the simple possibility that Stephens could play Venus in the round of 16. It would be ridiculous to look at this draw sheet and refrain from mentioning such a publicity-magnet matchup. After all, a figure with the stature of Vin Scully believes in informing viewers as opposed to being superstitious about sports.

There’s one other clear parallel between the Roland Garros WTA draw and the Wimbledon draw: Li Na could not have asked for a better bracket.

Yes, Li crashed out of Paris, gacking in the first round without any (deep or meaningful) explanation for her horrible performance. The world No. 2 can only hope that her mind is sorted out this time, because with Kvitova — an enduringly unreliable player — being the next highest seed in her quarter, Li should be able to make her first Wimbledon semifinal and, quite frankly, her first final.

Want to know how the 2014 women’s tournament will unfold at Wimbledon? It all depends on whether you think Roland Garros will be a straightforward indicator or an “opposite indicator” for the coming fortnight at the All-England Club.