“You could sing a song about it,” Federer poetically reflected. It was indeed the script that inspires a sad love song or a broken-hearted lamentation — no matter what the musical genre might be.

Tennis is endlessly fascinating and often breathlessly exciting because, in the tension-soaked environment of the majors and the late-stage matches of the other foremost tournaments on the calendar, just one or two points will change the tenor of a sprawling three-hour slugfest filled with all sorts of plot twists and sharp emotional turns. The matches are rollercoasters, for fans even more than the players, and you never know when “one point” is going to occur, the kind of point which tips the scales in the other player’s direction and serves as a “before and after” measuring stick for the whole of the competition.

On Sunday at Court Philippe Chatrier, the Roland Garros men’s tournament took an unexpected turn precisely because of an even more narrow surprise: Roger Federer — the second-best overhead hitter in ATP history behind Pete Sampras — failed to crush an overhead on set point. Leading 7-6 and 5-3, 40-15 against Ernests Gulbis, Federer hit a smooth forehand to Gulbis’s backhand (ad) corner. Gulbis did well to shovel a defensive lob to Federer’s ad side. Federer came in behind his forehand, and the lob, while not enough to sail over Federer’s head, did force the Swiss to move backward at a diagonal angle, toward the sideline and facing toward Gulbis’s backhand side, across the court.

Some will call it a poor effort from Federer, and that claim is reasonable, based on the fact that he did not hit his overhead with a maximum of velocity. Yet, one can make an equally credible claim that since Gulbis’s lob was not a high one, Federer did not have as much time to react in the attempt to shape his shot. Redirecting the overhead down the line into Gulbis’s deuce (forehand) corner would have been a very tough play; hitting the overhead crosscourt was physically easier.

Gulbis — not known as being a highly intelligent or composed player — had the good sense to, first of all, stay in his backhand corner. Had he run to the deuce side of the court, he would have been making a percentage-based error. Then, when staying on the ad side, he was able to absorb that less-than-fully-crushed overhead and send it into the open court for a winner.

How did Djokovic hit that shot when going for broke?

How did I not win a point on my money shot, my overhead, with Gulbis guessing correctly?

Every player faces those points at some stage in a match, especially at a men’s major, when five sets will unearth all sorts of mini-dramas within the larger whole. Federer’s greatness over a career is based precisely on the fact that he’s been able to shrug off those kinds of points when they occur. In 2011 against Djokovic, though, when that 5-3, 40-15 point went against him, he was never the same player for the remainder of that match.

Such was also the case against Gulbis on Sunday. 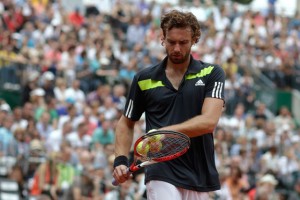 Ernests Gulbis has always been the antithesis of what a steady, composed, reliable tennis player looks like. On Sunday against Roger Federer and a Roland Garros crowd that considers Federer an honorary Frenchman, Gulbis actually managed to become the rock-solid player on the court, the one who didn’t blink when the moment mattered most. As a result, he’s made his second major quarterfinal, the first since 2008.

In order to understand the centrality of that 5-3, 40-15 point, one must first look at the whole of the match and then get back to the moment in time that swung it to Gulbis’s column.

Sure, Federer won the fourth set in this match, but that was more a case of Gulbis coming unglued in a stretch of three games, as Federer surged in front, 5-2. For most of this match, especially the third and fifth sets, Gulbis was the steadier player. As Rafael Nadal would say in his broken English, “It is the true.”

Tennis diehards will tell you that that last set of words — “Gulbis was the steadier player” — is the rarest of word combinations in the modern history of the sport. Gulbis’s career up to this point has been one of the most wasteful on the ATP Tour. The Latvian has joined Nicolas Almagro, Philipp Kohlschreiber (who lost to Andy Murray on Sunday in the completion of a match suspended by darkness on Saturday night), and a few select other ATP pros in squandering an immense amount of natural ballstriking ability for several years.

Unlike Almagro and Kohlschreiber, though, Gulbis is still in his mid-20s (age 25) and has some daylight left in his career… if he can put the pieces together. Gulbis took a huge step toward doing just that in his match, and over the course of five full sets, he was the better player. Federer was rarely comfortable on serve, failing to place his first serve with the precision he expects of himself. Gulbis, though, played a part in that by shrinking the court with dogged defense and a deft touch on a full complement of shots. Gulbis was the one making Federer hit an extra ball for most of this match, not the other way around. Gulbis isn’t known for his consistency, but on this day, that’s what won him the match and a ticket to the quarters to face Tomas Berdych on Tuesday.

To get back to the 5-3, 40-15 point in the second set, here’s the essential observation to be found in it: As was the case with the Djokovic semifinal in New York, nearly three years ago, the overlooked part about a 5-3, 40-15 point that didn’t go Federer’s way is that he lost faith in his game afterward. The shot from the Djokovic match that was just as important as the return winner at 40-15 was the 40-30 point, when Federer hit the tape and missed on an inside-out crosscourt forehand to set up deuce and enable Djokovic to ultimately break for 5-4. Similarly, against Gulbis, Federer lost focus at 40-30, dissolving into a pool of errors that enabled Gulbis to break for 5-4.

When Gulbis failed to break Federer later on in the second set, at 5-5, 30-40, he slammed his racquet to the ground and received a warning from the chair umpire. When Federer held for 6-5, it was reasonable to think that Gulbis would fly off the rails. Instead, though, the No. 18 seed played a nearly flawless second-set tiebreaker, gifting only one point and otherwise erecting a wall with his defense that Federer couldn’t hit or serve through.

Federer failed to win the 5-3, 40-15 point that could have made his day so much easier — and ultimately successful — but the even bigger story from his perspective is that he didn’t handle the outcome of the 5-3, 40-15 point the way he had in his prime. In 2011 and again in 2014, Federer’s mind — just as vulnerable to an athlete’s aging process as the body, which is what betrayed the Swiss in 2013 — didn’t hold firm in a moment of opportunity.

A negative response while owning a scoreboard lead has happened so rarely to Federer against players not named Nadal at the majors, at least since he began to turn the corner in 2004. However, on this day, a 5-3, 40-15 point — and the reaction which followed it — enabled one frozen moment to change the entire trajectory of a major-tournament match, one that could give Ernests Gulbis the belief that he really can salvage his career.

As for Federer: “You could sing a song about it.”