What is true for women’s tennis is also true for men’s tennis. Through 1987, the Australian Open was not so much a fourth major as a major in lighter clothing. Without a full 128-player draw, seeds received byes into the second round. On plenty of occasions, top pros didn’t make the trip Down Under to play grass-court matches. This reality, on one hand, means that decreased major totals for players in the 1960s, ’70s, and early ’80s need to be viewed with a sense of due proportion. It also means that any pre-1988 match in Melbourne just doesn’t acquire much significance within the larger story of tennis.

The Australian Open is now a fourth major in full, and it’s actually the best organized major of them all, with Wimbledon being second. (That’s opinion and not fact, but the Australian Open is hugely popular on tour, and what IS a fact is that three domed courts ensure a smoother-running tournament compared to the other three majors, which are playing catch-up.)

With only 27 “modernized” Australian Opens to choose from, a “most significant matches” list will consist of only five examples, not the 10 submitted for Wimbledon and the U.S. Open last year at this site.

This match is submitted not just because Nikolay Davydenko just retired (last year), but because it is illustrative of a larger dynamic at work in the tennis career of Roger Federer… and, for that matter, of Rafael Nadal and Novak Djokovic as well.

How many other times has a hot, in-form opponent without a major title or a supreme career breakthrough met Federer in a major quarterfinal or fourth-round match; landed a few early punches; played well enough to beat everyone but Federer/Nadal/Djokovic; and lost?

This match is a representative example of an “almost” player in the annals of 21st-century men’s tennis failing to beat one of the giants. Davydenko smoked Federer in the first set, 6-2, leading his opponent to take a tactical bathroom break, a rare occurrence for Federer. Davydenko, continuing to crush the ball in his Playstation kind of way, gained a 3-1 lead in set two and was achingly close to taking a 4-1 advantage.

What is worth recalling about the match is that when Davydenko had his set-and-a-break lead, the afternoon sun that had covered a substantial part of the court at Rod Laver Arena finally left the playing surface. When Davydenko committed a few costly errors as he tried to maintain his second-set lead, Federer not only gained confidence; seeing the ball better in the shady conditions, he blended into the environment and found himself. He won 11 straight games to tuck away the second and third sets, and although he lost multiple leads in set four, getting broken when trying to serve out the match at 5-4, he broke again at 5-5 and closed out the match in the 12the game of the fourth set.

Davydenko was, for a time, a terrifically consistent player, a resident of the year-end top six for five straight seasons (2005 through 2009). From 2005 through 2007, he made the quarterfinals or better at the Australian and French Opens, and in 2006 and 2007, he went “quarters or better” at the U.S. Open as well. Yet, he would often run into Federer in the quarters or semis of majors, and his inability to ever climb that wall took starch out of his career.

In 2009, though, Davydenko authored a resurgence, capturing the ATP World Tour Finals in London after winning a razor-close semifinal against Federer, the very kind of match he hadn’t won often in the past. (However, and this is instructive, that was a best-of-three-set match, not five.)

Entering this 2010 quarterfinal in Melbourne against Federer, Davydenko was playing as well as he ever had. The fact that he started the match on fire and carried that level through one and a half sets should have finally translated into a victory. Many tennis players with appreciable skill sets do break through once in a while. After all, Davydenko did indeed win that 2009 ATP World Tour Finals semifinal against Fed. However, in an enduring reminder of how best-of-five matches are different beasts, Davydenko couldn’t sustain a winning mentality in this major quarterfinal.

Part of the match’s significance is that it led to Federer’s 16th major title a few days later, but most of the match’s meaning lies in how it utterly destroyed what remained of Davydenko’s career. The Russian never again reached the second week of a major.

When one wants to cite an example of one match result essentially killing a career, this is not a bad choice.

The U.S. Open and Wimbledon belonged to Pete Sampras when he played Andre Agassi, but the counterbalance in the rivalry came in Melbourne, where Andre outgunned Pistol Pete. The greatness of the Sampras-Agassi rivalry is enhanced by the fact that Agassi did have a place where he gained the upper hand. Had Sampras bested Agassi in all the majors, this rivalry wouldn’t have been as much of one. Similarly, if Roger Federer lost a majority of Wimbledon finals to Rafael Nadal, it would be 646,839 times more difficult to view Federer as the best player of his generation. Since he did go 2-1 in Wimbledon finals against Nadal, it’s easier to view Federer-Nadal as a real rivalry, not just the one-way-traffic show it’s been for Rafa over the past several years at the majors. 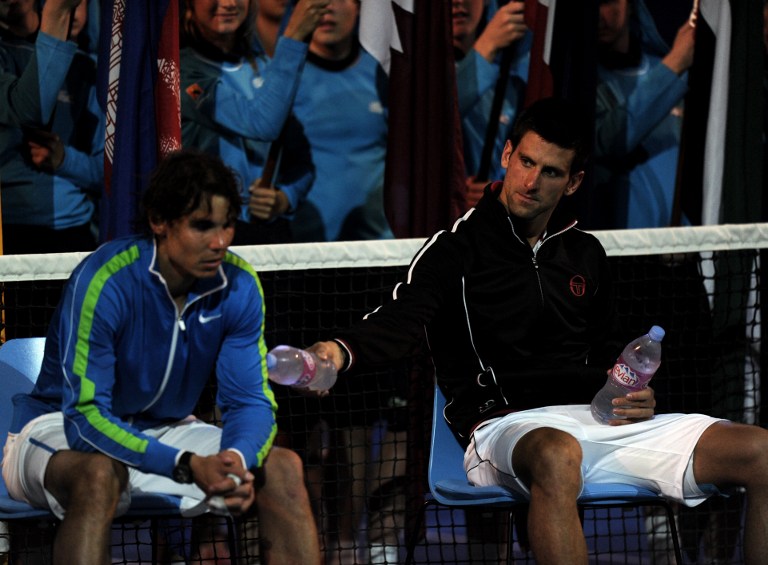 After battling for nearly six hours, Novak Djokovic and Rafael Nadal were allowed to sit down while Australian Open officials and tournament sponsors made overly long speeches. This photo captures the humanity of sports, following a match that captured the identity of the current era of men’s tennis.

The 2011 U.S. Open final contested by the two men was more purely punishing, and it was a better match to boot, but the “5:53” match between Novak Djokovic and Rafael Nadal — the marathon that didn’t even require a single extended-length set in terms of games — defined the attritional baseline tennis that has shaped the modern men’s game. Djokovic and Nadal love the fight nearly as much as the result. They love the struggle as much as the endpoint. They relish being pushed to their physical limits. They revel in physical combat and tests of stamina. The two men played a three-set match in 4:02 in the 2009 Madrid Masters semifinals, but this is the extended battle which acquires a more central place in history — not for its quality (which was nothing to marvel at), but because it represented such a different face of tennis compared to what we had seen before Djokovic and Nadal came along.

This match isn’t number one on the list because it represents an “exception” and not an “affirmation.” Rafael Nadal affirmed his greatness in example No. 1 below. This was a case in which a hugely talented player who so rarely managed to reach the finish line actually managed to buck his past for a brief period of time.

Marat Safin breezed through the 2000 U.S. Open final against Pete Sampras — that tournament was an example of everything coming very easily to a gifted player with an ideal tennis body. In 2005, though, Safin did something more impressive: He fought with tenacity and determination, winning with will in addition to skill. Safin trailed Federer, 5-2, in the fourth-set tiebreak, and Federer had two serves to potentially win the match. However, Federer missed his first serves, and Safin was strong enough to win both points. Safin later fended off a match point at 5-6 and won the tiebreaker before capturing the fifth set.

The 2000 U.S. Open was the best tournament Safin ever played. The 2005 Australian was the most impressive tournament he ever played. This match showed what could have been in a career that was generally wasteful — not as wasteful as David Nalbandian’s career, but still considerably wasteful in the end. Safin’s failure to repeat this kind of display is one of the 25 or 30 foremost “what-ifs” of 21st-century men’s tennis.

This match also magnified something else about men’s tennis: It showed that while Roger Federer has 17 majors, his ability to finish a close second or a close third at many other majors makes his resume that much more outstanding.

In golf, everyone knows Jack Nicklaus has 18 majors, but what some might forget is that the Golden Bear compiled 19 runner-up finishes at the majors and 48 top-three finishes. If you consider a semifinal a “tied for third place” result, Federer has 11 of those and 8 runner-up finishes in addition to his 17 majors. Given that Federer has had match points in some of his semifinal losses — this one, yes, but also twice to Novak Djokovic in the 2010 and 2011 U.S. Opens — it becomes even more notable that Federer’s non-wins in majors have often been near-misses. Yes, the trophy case is lighter for Federer than it could have been, but “losing at a high level” remains an enhancement of a resume more than a true blemish… it’s just not as much of an enhancement as lifting the trophy on the final Sunday of a major.

This match was outstanding in terms of quality through the first few games of the fifth set, before Federer faded. However, this match isn’t number one because of its quality. It’s No. 1 for two basic reasons:

A) This match enabled Nadal to establish the upper hand over Federer at the Australian Open, giving him an edge over Fed at two of three majors.

The two rivals have still never met at the U.S. Open. When Nadal-Federer comparisons and debates continue long after the retirements of both men (and you know they will), Nadal fans will rightly point to this result as a cornerstone of their case for the Spaniard as the best ever. It occurred, remember, not in Federer’s post-prime years, but very much within his prime period, which continued up to the 2010 Roland Garros quarterfinals against Robin Soderling.

Here’s another core reason why this match will be a centerpiece of any pro-Nadal arguments when the story of tennis is written:

B) This was the greatest thing Rafael Nadal has ever done on a tennis court.

The win over Federer was hugely amazing in itself, but the feat being referred to here is — more precisely — winning this 4-hour, 23-minute epic two nights after prevailing in a 5-hour, 14-minute deathmarch over Fernando Verdasco in the semifinals.

Novak Djokovic is, in his own right, a master of attritional tennis, and in fact, Djokovic’s semifinal-final combination of matches at the 2012 Australian Open lasted almost 11 hours.

However, unlike Djokovic in 2012, Nadal played tremendous tennis to win those matches. Djokovic wandered in and out of a comfort zone, but Nadal-Verdasco and Nadal-Federer were played at a great height for almost every set. That Nadal survived those consecutive five-setters — bringing his best to the biggest moments — tells you all you need to know about this unmatched competitor in the history of men’s tennis.