If a single theme can be gleaned from the first three days of the 2015 Australian Open, it is this:

For anyone who has played professional tennis for an appreciable length of time, the cauldron of major-tournament pressure reveals the essence of that player — not always in a career-long context, but often enough to make us notice.

Indian Wells and Rome and Cincinnati all have their places on the tennis calendar, and they certainly matter on both the WTA and ATP Tours, but the majors confer a special kind of pressure on the players involved. They focus the spotlight of the sport. They carry more weight. They magnify the experience of stepping between the painted white lines before a paying crowd. It’s the same court with the same dimensions and the same little yellow ball… but the stakes are higher — the prize money for the journeymen, the rankings points for the top 20 to 40 players, the championships for the true contenders.

Every competitor knows that any portal to immortality, to a towering legacy in the history of tennis, must flow primarily (though not entirely if you’re a Davis Cup or Fed Cup dynamo) through the majors. This is a central reason why watching them as a fan or covering them as a blogger is such a treat. Each participant gets revealed for who he or she is… not as a human being, but as a practitioner of the art of tennis in its outer and inner games.

The outer game is the assemblage of shots and skills, the combination of technique and execution in producing the same shots over and over again. The Inner Game Of Tennis is the mind’s attempt to enable the body to do what it needs to do, to be what it needs to be, when the umpire says “play” and the bright lights come on.

The fundamental challenge of tennis can be succinctly summed up in this manner: Can an ideal technique and crisp execution of highly repetitive strokes endure when the body falters or when scoreboard pressure emerges? At the majors, the reality of five-set men’s matches brings the endurance-test component of tennis more fully into the center of the ring. For the women, the reality that these three-set matches are different from ones in Estoril or Bastad enlarges the significance of each and every shot. Physically and mentally, the majors strip away the masks and enable us to see tennis players in full. This is why we watch.

Wednesday in Melbourne, Australia (late Tuesday night for Americans), two of the biggest names in tennis reminded us how clearly we’ve been able to see them over the years.

Rafael Nadal owns a tortured history at the Australian Open. If one ailment doesn’t jump up and bite him in a Melbournian January, it’s another.

In 2010 versus Andy Murray, it was a knee injury which compromised Nadal’s ability to play well.

In 2011 versus David Ferrer, it was a hamstring.

In 2013, Nadal couldn’t even play due to the injury which sidelined him for several months.

In 2014, the back injury suffered in the final against Stan Wawrinka followed a fortnight in which blisters on his hand became an issue in multiple matches.

When Nadal came down with stomach cramps in his 2015 second-round match against Tim Smyczek, his mind could have gone to all sorts of dark places. More accurately and precisely, it could have remained there.

Just about every person’s mind will go to a dark place in a moment of acute crisis or anxiety, but the trick is to not dwell on those feelings. (Anyone who has suffered panic attacks or knows someone who has endured them can speak to this reality.) Athletes are not immune to strange and unwanted thoughts in the heat of competition. Pete Sampras, in his autobiography, admitted to thinking about cheeseburgers and pizza during big matches. Andre Agassi fully and soulfully hated tennis before he could learn to love the sport more.

Rafael Nadal’s transcendent career is an endless banquet table of achievements and conquests, and yet, for all he’s achieved, the Mallorcan has had to pay a considerable price for those prizes. His body has been put through the wringer several times, occasionally for long periods. Suffering has marked his journey in and through the sport. Yet — and this is where Toni Nadal’s coaching comes into play — Rafa has always embraced that suffering instead of hating it. Sure, he doesn’t enjoy being in discomfort, but he’s always been mentally prepared to push through it if his body was able enough.

Doesn’t that last sentence describe exactly what Nadal did in his comeback from a two-sets-to-one deficit against a gallant and very gracious Smyczek in Rod Laver Arena?

We saw Nadal grimace. We saw him bend over. We saw him move haltingly at times. We saw him doubt himself. We saw him say after the match that he didn’t think things looked good after he lost the third-set tiebreaker to fall behind.

We also saw him do what he’s done a million times before: Fight.

Nadal does have more to achieve in tennis in the sense that he’d surely like to catch Roger Federer on the major tournament title list. He’d like to win a tenth Roland Garros, becoming the first man ever to reach double-figure championships at one major. He’s still in his 20s, so he should rightly expect that he has more miles in his legs.

Yet, in a much more expansive sense, Nadal has nothing left to prove. Short of the Calendar Grand Slam (which no one in men’s tennis has achieved since Rod Laver in 1969), Nadal has done just about everything there is to do in tennis. Sure, he might want to win Miami, but really, he’s climbed every meaningful mountain in the sport. If he had lost to Smyczek — given his lack of physical wellness — no one would have held it against him. A player with Nadal’s accomplishments and stature doesn’t have to do anything more to validate himself.

Regardless of what he does for the rest of this tournament, he’s already given us a moment to remember, and a reminder of his timeless greatness. 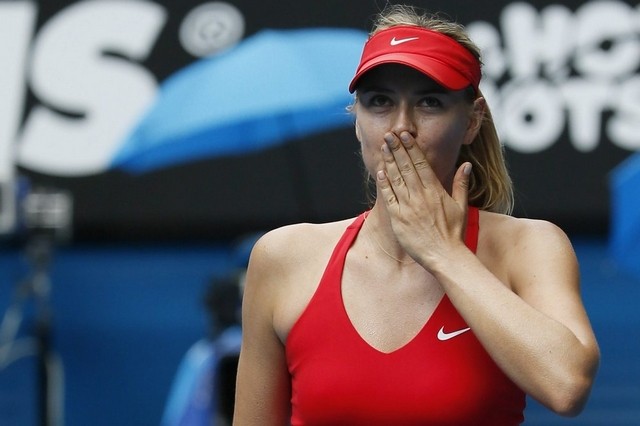 Maria Sharapova struggled. She stood on the precipice of defeat. She won an extended three-set match at a major. We’ve seen this movie exactly how many times?

It’s true that if you’re trailing in a match and have to make a comeback, you probably haven’t played as well as you needed to. Because of this reality, it’s easy to be less than fully thrilled or impressed by what Maria Sharapova often does on a tennis court. The struggles that are prevalent in many a Sharapova match can make her three-set comebacks pointless teases, theaters of the unnecessary. That’s certainly what Sharapova’s detractors feel.

However, the essence of Sharapova’s own competitive excellence is that she is able to replicate her escapes. These comebacks are not aberrational occurrences — they are regularly forged from the fires of on-court combat. These are not accidents, though they require a pinch of luck at times; these are not sure-fire indicators of defeat, though they do reveal a measure of weakness. The constancy with which we’ve seen Sharapova dig her way out of trouble over the years — as she did against Alexandra Panova in the second round — has led to a five-major haul and a No. 2 seed at a major tournament.

Sharapova’s escapes, you see, are not pointless — they have carried her to a meaningful place in the sport’s history, and in its present moment as well. This is what separates her from first-round losers Ana Ivanovic and Angelique Kerber (among others).

Ivanovic and Kerber are, like Sharapova, players who entered this tournament in the top 10. However, Ivanovic has aimlessly wandered the tennis desert for the past seven years, unable to make a single major semifinal in that period of time. Kerber, who has played the majors since 2007, has reached the quarterfinals or better only four times, and only twice outside of Wimbledon. Kerber collects plenty of match wins at second- and third-tier tournaments, but when the klieg-light glare of the majors finds her, she typically shrinks on stage, as does Ivanovic.

Sharapova — with a skill set that, it could be argued, is less expansive than what Ivanovic possesses — is a far more accomplished and successful player. Kerber’s court coverage is equal to if not slightly better than Sharapova’s — Kerber is noted for her ability to run down shots, after all — but Sharapova is the player who regularly gets more out of her abilities at tennis’s biggest tournaments. This is the inner game at work, and never is The Inner Game of Tennis more conspicuous in its effects than at the four major events on each annual calendar.

We’ve also seen Rafael Nadal and Maria Sharapova refuse to falter, even when ailments and on-court agonies brought them close to an early exit.

The first three days of the Australian Open have affirmed what we’ve come to know and expect from the familiar faces in the sport.