For when the One Great Scorer comes

To mark against your name,

He writes – not that you won or lost –

But how you played the Game.

Winning isn’t everything; it’s the only thing.

The two above quotes — one from a giant in American sportswriting from the first half of the 20th century, the other from a succesful American college football coach — capture the tensions and contradictions that are part of competitive athletics. Sports are games people play. They mean far less in the grand scheme of things than such matters as:

* What kind of person we become

* How we treat others

* What we do to alleviate suffering in others

* What we do to bring beauty to this world

Yet, as the father of American football coach Steve Spurrier told his son, “If you keep score, you’re out there to win.” These aren’t just relaxed recreational activities. That’s what we do on weekends at the public tennis courts. The men and women who play professional tennis in a sprawling desert setting — or on ancient Roman clay, or on slippery Wimbledon grass — play for a large pile of money, the burnishing of a reputation, and the taste of immortality brought about by a championship.

There is, in the theater of big-ticket athletics, an awareness that this stuff doesn’t matter at all on one level… and yet matters greatly on the other. This is the tension point which so perfectly describes the week and a half of women’s tennis which ran its course in Indian Wells for the BNP Paribas Open.

The exquisite contradiction at the heart of the women’s tournament is that the greatest champion in modern women’s tennis — a person who excelled at winning on the court for many years — still took center stage in Indian Wells… but without lifting a trophy at the end of the event. Serena Williams, returning to Indian Wells for the first time since 2001, already won this tournament by not only showing up, but raising funds for the Equal Justice Initiative, an organization dedicated to creating racial and class-based justice in and around the American prison system. Those efforts and other aspects of Serena’s advocacy are mentioned here by Dave Zirin of The Nation.  Serena didn’t just come back to Indian Wells. She brought a very specific and clear message of forgiveness and reconciliation. That is a victory a trillion times more important than anything Serena’s achieved on a court… and that’s saying quite a lot, given that Serena is at the center of the conversation concerning the best tennis players who have ever lived. More is said about the different reality surrounding Serena’s return to Indian Wells by Juan Jose Vallejo at Rolling Stone.

The long and short of it is simply this: When tennis chroniclers and historians look back at the 2015 BNP Paribas Open, they’ll remember it for what Serena Williams brought to the event more than anything else. For one and a half weeks — far more than any other 10-day stretch on the tennis calendar — a celebration of Serena Williams had very little to do with her actual tennis (which made its way to the semifinals before her most unfortunate injury-based withdrawal). As such, an off-court reality gained more centrality in the American desert than at any other tournament we’ll witness in 2015.

Yet, while Serena’s moving example of forgiveness will claim a permanent place in many hearts, the temporary dramas of winning and losing, of rising and falling, continued throughout a fascinating near-fortnight. The WTA side of Indian Wells didn’t fall short in terms of showcase confrontations or compelling spectacles.

Maria Sharapova met and subdued Victoria Azarenka… and that was just the beginning. Sharapova was then improbably defeated by Flavia Pennetta, the defending champion, in a contentious three-setter. Pennetta held three match points over Sabine Lisicki in the quarterfinals, but Lisicki — not known for her composure in difficult scoreboard situations — saved all three with strong plays, one of them being a confident approach forehand to Pennetta’s deuce corner. Lisicki was eventually stopped in the semifinals by a resurgent Jelena Jankovic, who just became a member of the 30-year-old club and reinforced the continuing successes of tennis’s older set, regardless of gender.

Let’s say more about Jankovic. She reached the semis in the first place partly because her quarterfinal opponent, Lesia Tsurenko, had to retire. It was Tsurenko who toppled an injured Eugenie Bouchard in a three-set thriller by winning the final five games of the match. At 4-4 in the third set, Bouchard missed an easy crosscourt backhand at ad-out after losing a love-40 lead on Tsurenko’s serve. You can cite the Bouchard injury as the main reason she lost, which is entirely fair. Yet, Tsurenko still had to close the sale, and she did. One day after another, the compelling three-setters kept unfolding in this tournament.

This pattern — one plot-twist-laden three-setter after another — was no different in the semifinals, as Lisicki earned a set-and-a-break lead on Jankovic but then began to leak errors on balls hit in the middle third of the court. Lisicki made 19 unforced errors in the second set and never could regain the easy, angular hitting which had enabled her to open up the court in the first one and a half sets. Jankovic reeled in her opponent.

In the final, it was Jankovic who grabbed the set-and-a-break lead, only to drown in a sea of errors while her opponent, Simona Halep (the beneficiary of Serena’s gut-punch of a withdrawal in the semifinals), steadied the ship. Two months ago in Australia, Halep’s appetite for battle was widely questioned after a decisive quarterfinal loss to Ekaterina Makarova was marked by odd body language and an even more bizarre press conference. Now, Halep’s competitive chops are once again evident, her Melbourne experience seemingly a thing of the past. 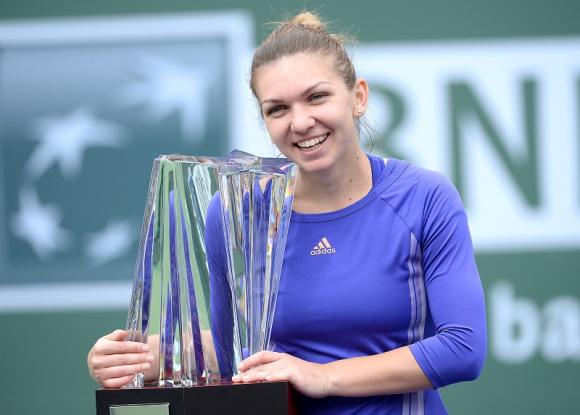 Halep’s resurgence, like Jankovic’s tremendous tournament and Lisicki’s unexpected dash to the semifinals, certainly merits praise. Yet, all three of those developments — not to mention Pennetta’s win over Sharapova, Tsurenko’s spotlight moment against Bouchard, and the continued successes of Timea Bacsinszky (whose 15-match winning streak was snapped by Serena in the quarters) — are all very temporary when seen in a much larger context. We’ll want to see how each of these players handles Miami and then the coming clay season.

The transcendence of those temporary stories was achieved not by a serve or a groundstroke at Indian Wells. The permanence of this tournament was provided before a single ball was struck. Serena Williams didn’t play in either of the final two matches at this event. Yet, her message of forgiveness and her advocacy for justice tell us that, according to Grantland Rice, she is playing the game as well as anyone possibly can.

The past week and a half in Indian Wells certainly featured many riveting women’s tennis matches. Those competitions, however, will fade away. Serena Williams’s message is what will endure a great many years from now.