Lleyton Hewitt’s tennis career isn’t over, but his Wimbledon career is.

Jarkko Nieminen, also playing in his last Wimbledon, extended his stay another match (but only one more match; Novak Djokovic is next) at the Big W. In a marvelous match, Nieminen defeated Hewitt, 11-9 in the fifth set. The battle took almost four hours on the first day of The Championships and gave Hewitt a painful and premature but still fitting farewell to tennis’s most prestigious tournament.

No player deserved to ride into the English sunset in five sets more than Hewitt, as this next fact shows:

Since history breathes more deeply at The All-England Club than anywhere else on earth — this is where tennis took root, after all, in the 1870s — the most appropriate time to herald the end of a notable career is when it leaves SW19 for the final time.

Lleyton Hewitt ceased to be a contender at major tournaments long ago, so it’s been quite a while since the scribes and commentators at a major tournament have had occasion to devote extended time to the Australian. He’s remained popular with fans, and though far from a universally loved figure — the scars of his combativeness and profanity have lingered for many — his Wimbledon farewell generated a substantial amount of fanfare, more than 98 percent of all tennis pros are fortunate enough to receive:

Lleyton Hewitt: "The crowd was fantastic. I wouldn't have wanted it any other way." #Wimbledon #ThankYouLleyton pic.twitter.com/z0TchvERw8

You could read a lot of words about Hewitt as a competitor and a polarizing, divisive figure during his long and memorable career. However, that side of Hewitt is best captured in images more than words. Here’s a brief photo essay on tennis’s answer to The Lawnmower Man: 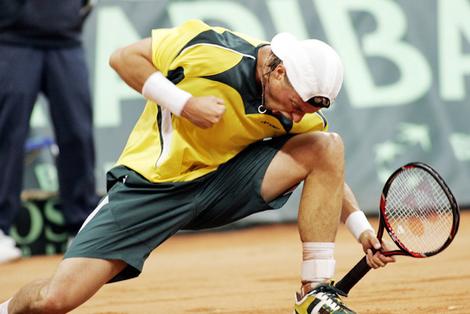 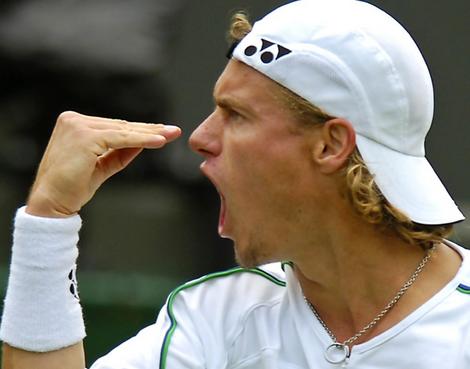 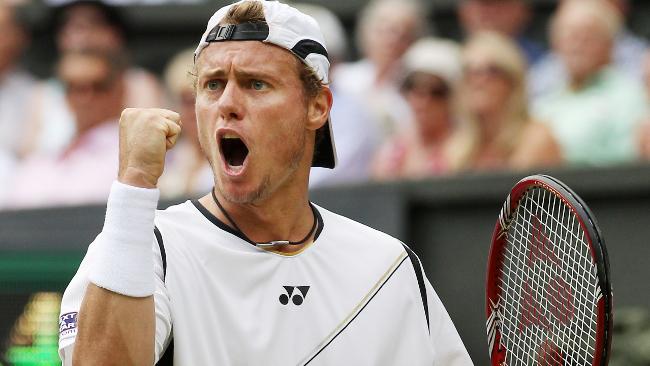 For many years, Lleyton Hewitt was unquestionably one of tennis’s “bad boys.” He wasn’t just pugnacious; the key insight to be gleaned from Hewitt’s prime years is that he reveled in his pugnacity. Abrasive, unapologetic, breathing fire and spitting nails, Hewitt compensated for his undersized physical frame by being the most determined competitor on the court. He was unable (and, one could argue, unwilling) to rein in these competitive instincts off the court, and while there’s frankly no excuse for being divisive just because one wants to, it’s also true that Hewitt’s mindset enabled him to become all that he became as a tennis player.

This is where an appraisal of Hewitt’s career emerges, and it’s difficult to not hold the Australian in very high regard.

When the careers of male tennis players are discussed these days, it is a near-automatic instinct to identify when a player was born and measure it against the Federer-Nadal-Djokovic era that has unfolded over the past 12 years. Lleyton Hewitt made the quarterfinals of a major only once after 2006. Ever since the second half of his twentysomething years, he was a relatively marginal figure in tennis. Accumulated injuries and the grind of the tour did him no favors. He played for love of the sport in his latter years; chances at titles rarely came his way, almost exclusively at smaller tournaments (the ATP 250 and 500 events on tour).

Hewitt won five titles after 2006. The window for his prime years closed not too far after it opened. In these respects, Hewitt’s career didn’t defy the laws of tennis physics; it confirmed them. This is how the sport works for most players, even the better ones.

Yet, for being relatively mortal — compared to the giants who followed him in this Golden Era of men’s tennis — Hewitt didn’t leave much unattained.

For a player who is under six feet tall, and therefore has anything but the ideal tennis body, Hewitt achieved nearly all there was to achieve in tennis. Wimbledon, the U.S. Open, two Davis Cup titles, two year-end championships, two Masters titles, a major doubles title at the 2000 U.S. Open, 30 overall titles — that’s a full platter of accomplishments. The one important tournament Hewitt should have been able to win, but didn’t, was the Australian Open. Like Pat Rafter then and Samantha Stosur now, Hewitt sagged under the pressure of wanting — needing — to win a host-nation major tournament. He reached only one final, and that wasn’t even in the period of time when he should have stood above the crowd (2005, a point by which Federer had begun to dominate the sport but lost to Marat Safin in the semifinals after losing a match point in the fourth-set tiebreaker).

Hewitt’s failure to win the Australian Open, though, still magnifies what he achieved at other points in the tennis calendar during the years which preceded Federer’s emergence (and soon after, the arrival of Nadal and Djokovic, players who kept Hewitt and his contemporaries from winning more often).

Hewitt, like Rafael Nadal, was a quick learner, a player who gained a substantial grasp of the competitive arts of tennis at a relatively early age. Much as Nadal won his first French Open just after his 19th birthday, Hewitt won his first major at age 20. Moreover, Hewitt won that major on hardcourts at the U.S. Open, the tournament that became his most successful major (one title, one final, three semifinals).

Hewitt’s performance on American hardcourts was so conspicuously and demonstrably strong in the first few years of the 21st century. This does show that his Australian Open results fell well short of where they should have, especially since the Australian Open produced finalists such as Thomas Enqvist, Arnaud Clement, and Rainer Schuttler — and Thomas Johansson as a champion (in 2002) — during that same period.

The Australian Open was definitely a mental stumbling block for Hewitt, the player who won so many matches with his mind. However, if you’re able to look beyond Melbourne and appreciate the whole of Hewitt’s career, what he did at the U.S. Open and elsewhere is truly magnificent, even now. The quality of Hewitt’s longevity doesn’t match what today’s greats are doing, but the quality of Hewitt’s prime was something to behold, and that was never more true than when he was just 20.

Watch this video, and you’ll remember why:

The enduring memory from Lleyton Hewitt’s straight-set win over Pete Sampras in the 2001 U.S. Open final (the last major American sports event held before September 11, 2001) is that Sampras never felt comfortable from the baseline. Sampras struggled to calibrate his groundstrokes in that match, and while windy conditions played a part — as they often do in New York — Hewitt’s compact strokes and his ability to take the ball early with quick, efficient swings of the racquet robbed Sampras of time.

Hewitt was never going to enjoy much success on the slower conditions of Roland Garros and the high bounces heavy topspin could generate. Hewitt’s lack of size really hurt him on clay, but if you put him on Wimbledon lawns or a hardcourt that was at least medium-fast, he felt very comfortable. That Hewitt showed so much composure in that U.S. Open final against Sampras — easily the biggest match of his life up to that point — revealed Hewitt’s gift for sustained concentration, something which pushed him past so many of his peers. When not saddled with pressure in Melbourne, he simply didn’t give away very many matches when at his peak.

If you’re still not convinced that Hewitt’s career deserves to be seen in such glowing terms, remember that Hewitt’s serve placed a constant limitation on his ceiling, something which became more apparent as men’s tennis became a much more ruthless sport in 2008 and 2009, with Andy Murray (one of the best returners in the sport’s history) and Juan Martin del Potro becoming factors on tour. The whole of men’s tennis steadily improved over the past decade, as the early 2000s and its period of relative mediocrity gave way to the cutthroat second half of the decade, when Nadal elevated his game on grass and hardcourt and the era of three all-surface giants (Fed, Rafa, Djokovic) began to take shape.

Hewitt’s serve was a limitation because — for a player with a lack of height — the ability to hit a flat wide serve was compromised. The net is lower at its midpoint and slightly higher toward the edges. If Hewitt was going to serve in a given direction on a break point, especially from the ad side, players could generally assume he was going to go down the middle. If Hewitt tried the flat wide serve, it was a lower-percentage option for him. Being smaller also meant that Hewitt couldn’t hit kick serves with greater effect — think of what John Isner can do with a second serve on a 30-40 point, especially on clay.

Hewitt could win points such as this one, one of the best of all time…

… but in the later years of his career, his game was not infused with enough power to win serving contests on days when his opponent played well. Hewitt could not pick up the amount of cheap points on serve that all of today’s players depend on in crucial situations. If Hewitt’s career lost steam in its mid-20s, it wasn’t due to a failure to adjust or to a lack of ability; men’s tennis simply got a lot better, and Hewitt was not in position to change (enough) with the times.

In terms of making a final assessment of Hewitt’s career, the Sampras match in 2001 remains the centerpiece, not just because of how cleanly Hewitt won it, but because of the story Sampras authored at that point in his career.

First of all, recall that just a few days earlier at the 2001 U.S. Open, Sampras had beaten Andre Agassi in the four-tiebreaker epic that just might have been the best match those two legends ever played. Both Sampras and Agassi held all 24 of their service games, and the difference was Sampras’s knack for the big moment, something which eclipsed Andre’s excellence in most of their big-stage meetings at the majors.

One year later, Sampras beat Agassi again at the U.S. Open, this time for his 14th and last major title in his last major-tournament match. Sampras made the final in each of his final three U.S. Opens. Though burned out on tennis over the course of full seasons, Sampras filled his fuel tank in New York. That Hewitt so clinically dissected him in a final should stand as a reminder of just how good Lleyton Hewitt became and remained in those few years at the start of this century.

For someone who won “only” two majors, Hewitt’s body of achievement might be dwarfed by Andy Murray’s dossier (think about that for a second, too, in terms of appreciating Murray…), but it stands well ahead of the likes of many other contemporaries or past players who won just one or two major championships. That Hewitt did all he did with his 5-foot-11 frame should serve as reason to admire him more, not less, as a player.

In the end, what Federer, Nadal and Djokovic have done these past 12 years has spoiled tennis fans. The dominance we’ve seen from the best of the best on the ATP Tour makes it hard to recall the point in time before they became such a regular part of our lives. In that time — a time which belongs to this century yet seems like 30 years ago — a few men did what they realistically could to make their careers full-fledged successes.

That Lleyton Hewitt made himself part of that short list as well is enough, for many, to regard his career as one of the more special tennis journeys we’ve seen in the past 20 years of professional tennis.