It is easy to focus on certain details, certain individuals, certain contexts, to the exclusion of others.

Thursday afternoon in Melbourne, Australia, it was so easy to look at Madison Keys — all of 19 years old — crushing a tennis ball with a smooth and relaxed stroke, and conclude that “the future of women’s tennis had arrived.”

On the surface, such a statement seems to ring with truth. Keys is such a natural ballstriker. She generates what seasoned tennis observers would call “easy power,” the ability to hit the ball hard with an uncomplicated motion that is easy on the body and doesn’t invite the possibility of stress, strain or injury. She serves authoritatively from both the ad and deuce courts. She is fearless in her approach to the sport. Given excellent mental preparation by coach Lindsay Davenport — who also possessed a graceful and fluid way of clocking a tennis ball — Keys shows every sign of becoming an elite player in the fullness of time.

She might have lost to Serena Williams, 7-6 (5), 6-2, in the Australian Open semifinals, but Keys unquestionably enhanced her profile and credentials in defeat. Taking Serena to the limit in an excellent first set, followed by saving eight match points at the very end — always with an impressive winner — showed that Keys is made of sterner stuff. Had she not been injured, and had the Australian Open used a second-week schedule in which all four semifinalists (not just two) received a day off after the quarterfinals, Keys just might have been able to win this match.

Yes, Serena earned this win with steadier play in crucial moments, especially the first-set tiebreaker. The point to emphasize, though, is that Keys was physically hampered in this match and still made a battle of it. Keys performed and competed far better than the other losing semifinalist, Ekaterina Makarova, who was dreadful and disjointed in a 6-3, 6-2 loss to Maria Sharapova in the day’s first semifinal.

Keys might have lost a match to an in-form Serena Williams (a lot of people have done that and will continue to do so), but she won everything else: respect from fans, coaches and peers; the belief that she can handle the big stage; the knowledge that she can stand toe-to-toe with elite opponents; and an awareness of how she can improve the next time she gets this deep into a major.

Sometimes, losers of competitions can leave a bigger mark than winners. Serena, as the victor, certainly impressed everyone who watched her match against Keys, but her young challenger just as clearly created a positive imprint, one full of hope for the future of American tennis.

It makes sense to say that Keys is the future of the sport, especially in the United States.

Yet, that’s only part of the story. 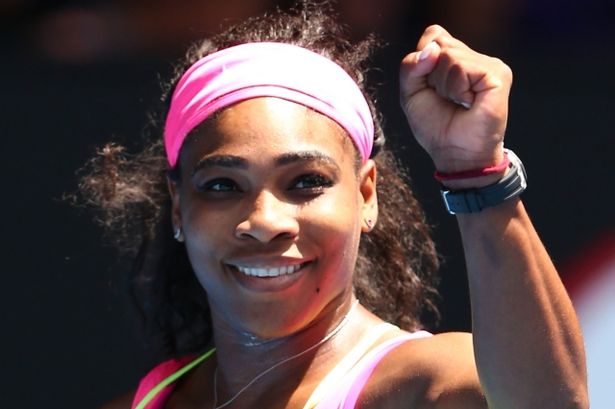 Madison Keys threw everything she had at Serena Williams, especially in a contentious first set. The 18-time major champion calmly did what she had to do to win a first-set tiebreak. By emerging from a competitive crucible wholly intact, Serena advanced to the Australian Open final on Saturday in Melbourne.

The problem with saying that Serena-Keys was a look into the future of both women’s tennis and American tennis is that it was also a glimpse into the past and present. This match opened all the doors of time.

In seeing Madison Keys throw down aces and service winners with a totally unbothered and casual demeanor, one could have thought that a new and updated version of Serena had been created. After all, Serena called forth thunderous serves as soon as she sniffed trouble against Dominika Cibulkova a day earlier in the quarterfinals. Serena also flourished on serve in the final set of her fourth-round win over Garbine Muguruza.

When seeing Keys, one also sees Williams — not just in Serena’s past glories, but in this Australian Open. This is why Thursday’s high-level semifinal opened all the doors of time.

Keys is a portal to the future, but Serena is a present-day star with a long history in the eyes and minds of fans. Therefore, if one player’s huge game — built on a massive first serve and an attack-oriented mindset — is the future, the other player’s very similar style ought to merit the same assessment. Yet, since Serena and Keys occupy two very different eras of tennis, it’s hard if not impossible to view both of them as “the future.” Only Keys can truly be that kind of player in a more expansive sense. Serena’s career is centered around her todays and how they measure up to the yesterdays. Keys’s career is about the tomorrows that lie in store for her.

Was this marvelous advertisement for women’s tennis a heralding of what’s to come in America and on the WTA Tour at large, or was it a grand reminder of a legendary 18-time major champion’s staying power in her sport?

The answer, of course, is both.

You might think this match dealt with the future and nothing else, but Serena Williams’ stirring win over Madison Keys in Australia was just as much a glimpse into the present and the past. While the years go by and fresh 19-year-old faces such as Keys burst onto the scene, the fixed and immovable presence of Serena Jameka Williams continues to tower over the rest of women’s tennis… just as it has for most of the past several years.

The exciting possibility to emerge from this semifinal is that in six or seven years, Madison Keys could be standing in Serena Williams’ shoes. She stood across from them quite well on a day when a legend won, a 19-year-old grew up, and absolutely no one lost in the second Australian Open women’s semifinal.