It’s all so deliciously historic, spiced with the flavor of recent tennis years at Roland Garros.

Sunday in Paris, Novak Djokovic will play for a piece of immortality in the sport he has mastered so fully. The world No. 1 will get a chance to complete the career Grand Slam because he typically steeled himself in a fifth set on Saturday against Andy Murray. The completion of this suspended French Open semifinal began with Murray surprisingly taking yet another set by a 7-5 score, but when pushed into a deciding stanza these days, Djokovic is just about automatic.

In deciding sets — fifth sets in best-of-five matches, third sets in best-of-three contests — Djokovic is now 27-1 since February of 2014 with his 6-1 breadsticking of Murray on a sunny afternoon at Court Philippe Chatrier. If beating Nadal at Roland Garros is the toughest thing to do in tennis, and beating Serena Williams anywhere is No. 2 on the list, beating Djokovic in a final set over the past 15 months could very reasonable check in at No. 3.

Djokovic — his fans surely know this — is a drama magnet in the sense that he finds a way to make at least one match per tournament unnecessarily complicated. However, once he makes life more difficult for himself, Djokovic almost always escapes trouble. It’s his signature virtue as a competitor, regularly sorting things out in the sport which doesn’t allow on-court coaching on the ATP Tour, and never (for either gender) in the four major tournaments of the year.

Having survived Murray — largely because he survived an uncertain first game of the fifth set, one which snapped Murray out of a competitive trance — Djokovic will indeed gain a date with history on Sunday. It’s a date which could have been formally sealed on Friday evening, but loose second-serve returns and other careless errors in the early part of the third set prevented him from being able to take Saturday off. No matter — Djokovic did not stay on court very long on Saturday, almost exactly one hour. He’s already received his hitting session, and Murray just might have tuned him up for his big moment.

Let’s now talk about that moment and how it echoes through the corridors of modern tennis history:

In the 2009 Roland Garros final, a man from Switzerland stood on one side of the net.

In that same final, a man played for the career Grand Slam on red Parisian clay.

In that same final, Magnus Norman — himself a former Roland Garros finalist — coached one of the two players.

In that same final, the player from Switzerland was opposing the man who had beaten Rafael Nadal earlier in the tournament.

Roger Federer was the Swiss player who doubled as the chaser of the career Slam. Robin Soderling was coached by Norman. Soderling is the one who beat Nadal earlier in the 2009 French Open.

All those crosscurrents come rushing back to the surface on Sunday. 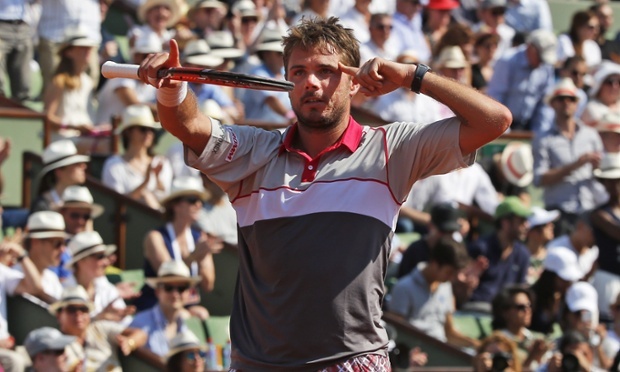 We have Swiss representation in the person of Stan Wawrinka, a victor over Jo-Wilfried Tsonga in a Friday semifinal hijacked by oppressive and extreme heat.

Djokovic is the man pursuing the career Grand Slam.

Magnus Norman now coaches Wawrinka, at a time when Soderling remains inactive (but is contemplating a comeback).

As Federer carried the Swiss flag against the conqueror of Nadal in 2009, Wawrinka takes on the only other man to beat Rafa at Roland, Mr. Djokovic, in this highly compelling but very different sort of final.

It’s a feast for the eyes, with rich possibilities spread all over the banquet table.

What adds to the sense of history surrounding this match is how the Djokovic-Murray semifinal provided a fork-in-the-road moment for both Nole himself and the workings of history.

In 2009, when he was desperately trying to secure his first French Open, Federer found himself immersed in a fifth set in the semifinal round. Federer played from behind most of the day, but after blowing a 3-1 lead in the fifth, he had to wonder if his huge opportunity would slip away. However, Federer re-gathered himself and broke back at 3-all to restore order. He finished off the set and moved to his own rendezvous with eternity. Djokovic is likely feeling a lot of the same emotions and sensations Federer did in 2009; their semifinal paths, while hardly identical, bring up enough similarities to make a person notice.

What could have added to Djokovic’s sense of panic at the start of the fifth set — remember, he didn’t really settle down until after he escaped that first dodgy game, helped by a Murray error at deuce — is that in the 2011 Roland Garros semifinals, Djokovic was very much in the position Murray inhabited on Saturday.

In that 2011 semi, Djokovic fell behind Federer two sets to love but then mounted a furious comeback. At 5-5 in the fourth set, Djokovic broke and served for the fourth set at 6-5. Murray did the very same thing, but the Scotsman held to finish the fourth set and bring about a fifth. Four years earlier, Djokovic lost serve at 6-5 and then fell in the subsequent tiebreaker to lose the match. Knowing that he failed to complete a five-set comeback in 2011 while seeing Murray force a decider in 2015, Djokovic could have allowed the weight of history — of an opportunity missed in the past, and an opportunity slipping away in the present tense — to get to him.

Djokovic, though, has made himself into a strongman between the ears. When almost everyone else on tour (Nadal is a clear exception) would falter, Djokovic becomes a more secure and fortified competitor. That 27-1 record in deciding sets is no accident, and it’s accompanied by what is now a 24-8 record in best-of-five-set matches.

Stan Wawrinka stands in the way of history tomorrow, history Novak Djokovic has earned the right to compete for. The world No. 1 walked over the hot coals of the fifth-set semifinal crucible Roger Federer had to endure in 2009. He has absorbed the pressure of the occasion, and if you were a betting person, you would have to expect that Djokovic will be up to the task on Sunday.

Let’s say this much, Stan Wawrinka, with your big game and a big-moment presence that could certainly enable you to pull off the upset:

If you’re going to deny Novak Djokovic his entrance into a select tennis fraternity, you better do so in three or four sets. If you’re going five, you’re probably not going to remain alive against the ultimate lockdown artist in men’s tennis.