Monday in Melbourne, the host nation for the Australian Open celebrated its foremost national holiday. In the past, Australia Day has marked the day during the Australian Open when play would be interrupted during the night session for a fireworks display. This has been the source of great controversy and angst, given the reality that an interruption can (and in fact has) managed to play a part in altering the competitive nature of a match by either disrupting the concentration of the flourishing player or giving the faltering player a chance to regroup (or both).

This year, the fireworks display in Melbourne was moved, so the tournament didn’t have to stop a night-session match.

Instead, the Australian Open saved its fireworks for the court, as the best of the Women’s Tennis Association showed their stuff in a day tennis fans — especially those in America — will not soon forget. What happened on January 26, 2015, will certainly resonate through the rest of this year in one way or another. That much is certain. The events of this magnificent Monday in Australia also rippled through the past as well. The only question left to answer is how far these events will reach into the future.

Let’s ask a simple question: What was the biggest story in the women’s tournament at the Australian Open on Monday? The simple act of asking this question enables one to quickly appreciate how special this day was, a feast for both Australian spectators on holiday and American viewers who stayed up on a midwinter’s night to take in the first major tournament of the year, at its midway point. 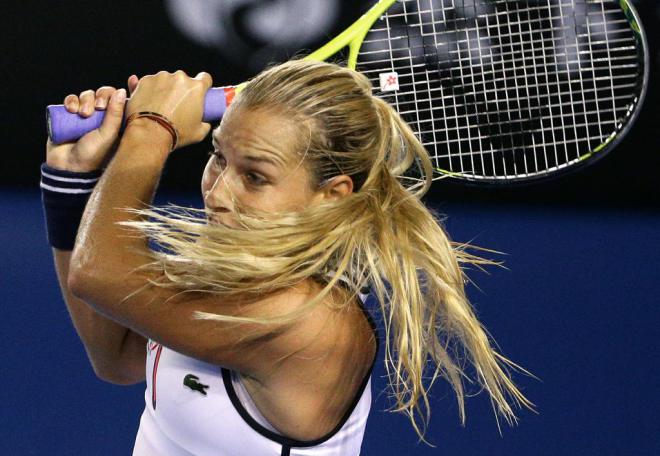 Dominika Cibulkova’s tennis flowed even better than her hair did against Victoria Azarenka. This was not about Azarenka’s deficiencies in her comeback from an injury-laden 2014. This was about Cibulkova managing to recapture — and maybe even improve upon — the form she displayed in making the 2014 Australian Open final.

Was the biggest story Dominika Cibulkova’s victory over Victoria Azarenka, in the best-played match of the day?

Cibulkova unfurled 44 winners in a three-set match, compared to just 29 unforced errors. She hit big and went for her shots from start to finish, and moreover, it’s not as though Azarenka played poorly — anything but. Azarenka clobbered 32 winners and played at a level that was good enough to beat a very high percentage of players on tour. Cibulkova, though, was simply better. Though down 2-0 in the third set, she relentlessly attacked any ball that didn’t pin her deep behind the baseline. She was able to change the conversation after Azarenka — blown away in set one by “Pome Power” (“pome” is “come on!” in Cibulkova’s native language) — played a full-flight second set to square the match before taking a break lead in the third.

The most incredible part of Cibulkova’s masterful performance — in this match and at this tournament — is that it came on the heels of a virtual disappearing act in the second half of 2014:

Coming into the Australian Open, Dominika Cibulkova's win-loss record since Wimbledon last year was 6-12. She's a set away from the quarters

Was the biggest story of the day Serena Williams’s three-set win over Garbine Muguruza in a dazzling display of fierce hitting and equally forceful competitive resolve?

This match was, as Juan Jose Vallejo of Rolling Stone magazine called it, “the heavyweight bout we came to watch.” Muguruza dusted Serena, 6-2, 6-2, at Roland Garros last year, one of three 2014 exits from majors by Serena before the quarterfinal round. Muguruza, who reached the quarterfinals in Paris, was trying to make a second major quarterfinal and add to Serena’s first-week woes at majors, which would have become a talking point once again had the top seed failed to escape this match.

Serena had every excuse to not go after this match. She was sick — she was coughing violently at changeovers. Her footwork and movement were clearly not as crisp as they could be. Serena had won the U.S. Open, won the WTA Finals in Singapore, won the right to still be considered the best in her sport in a present-tense sense. She didn’t HAVE to win this match… but darnit, Muguruza — who put another 6-2 scoreline on her in set one — was NOT going to win consecutive matches over Serena Jameka Williams.

At least, that’s what the great champion decided midway through set two. 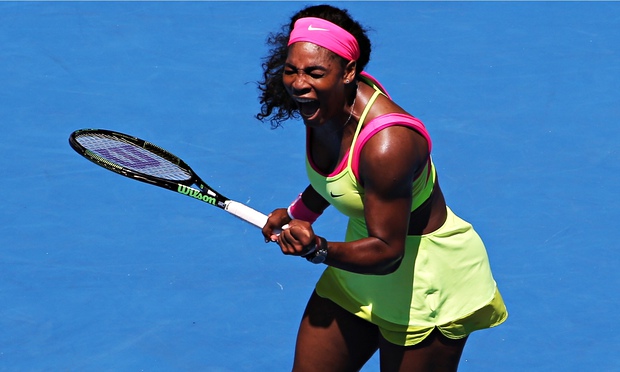 Serena Williams is the best performer of her generation in women’s tennis. Monday, she also reminded us how well she competes. In one match, Serena showed that she’s in a much better frame of mind than in the first half of 2014, when early exits from majors were commonplace.

Yes, there was a more conscious attempt to hit to the open court from Serena, to hit with pace before Muguruza could clock a short ball crosscourt, which the 21-year-old Venezuelan did a lot in the first set and a half. However, this was less about tactics than it was about competing and carrying oneself in a way that makes an in-form opponent flinch. Serena started to give away fewer points, and she hit with increased authoritativeness, which in turn prevented Muguruza from being able to pounce on openings… those openings just didn’t emerge as much.

As soon as Serena won the second set and then toughed out a nervous hold for 1-1 in the third, the best server in the history of women’s tennis began to unload aces and service winners. She was never bothered for the rest of the third set, and she was able to find the finish line as a result. Muguruza announced herself as a player who should be a foremost contender on the WTA Tour for the next several years, but Serena announced that she’s still got it… even when she’s not fully healthy.

Was the biggest story of the day Venus Williams’s upset of Agnieszka Radwanska?

In Montreal last summer, Radwanska surrendered only six games in a relatively uncomplicated win over Venus. However, that was a non-major tournament, which meant that the match occurred only one day after the semifinals. Venus had beaten Serena in a terrific but taxing match that left her spent for the final. Radwanska swooped in and grabbed the opportunity. This time, Venus had a day to rest, and since this match was at night, the conditions were comfortably cool. In what was an up-and-down match which did not rise to the aesthetic heights of Cibulkova-Azarenka and Serena-Muguruza, Venus was able to overcome a second-set Radwanska rally to prevail, 6-1 in the third. In so doing, the 34-year-old made a major quarterfinal, her first since the 2010 U.S. Open.

Many American tennis fans wondered not if Venus COULD do this — she certainly could, especially as shown by her magnificent match against Petra Kvitova at Wimbledon, the best match of that whole tournament. However, American tennis fans did wonder if Venus WOULD be able to pull off a run to the quarters or better at a major. The effects of illness — and the limitations they have placed on Venus’s body — led to inconsistency in performance. The constraints of age also had to be acknowledged each and every time this legend of the game took the court at a major. This achievement — reaching the final eight of a major at age 34 and four and a half years following the previous instance of it — is nothing less than profoundly inspiring.

It also sets up a very special moment in the history of American tennis. 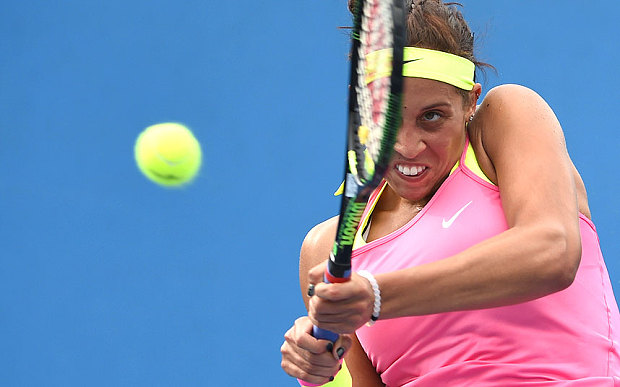 Madison Keys versus Venus Williams in a major-tournament quarterfinal. Forget, for a moment, the keys to the match or how it will play out. The simple reality that this match is occurring under these circumstances is itself a gift to American tennis fans.

Was the biggest story of the WTA’s magical Australia Day the victory by Madison Keys over Madison Brengle, which vaulted the 19-year-old into her first major quarterfinal?

The quarterfinals of both the men’s and women’s tournaments are set in Melbourne, and there’s a 19-year-old with a big future in each draw. Nick Kyrgios is the 19-year-old wizard on the men’s side, and on Monday, Madison Keys became the late-teen talent to crash the final eight on the women’s side, swatting 33 winners in dismissing Madison Brengle, a fellow American, from Melbourne.

Keys takes her 19 years into a high-publicity quarterfinal against the 34-year-old Venus. It is a match of generations, a match between two American women of color, a match which so clearly and powerfully signifies the passing of the torch, and — at least to some extent — the ability of the Williams Sisters to inspire younger women of color to play tennis.

Just how great will Keys’s career be? We don’t know, and we can’t assume that what seems possible at 19 will automatically still exist in two or three or four years. Times change, and so does the human body — which in turn affects how one plays tennis. One doesn’t want to get the hype train rolling too far or too fast with Keys… it’s still a little early for that. Nevertheless, there’s no question that this matchup of 19 versus 34 offers the teasing, tantalizing possibility of becoming the kind of match that gets remembered many decades after it is played. It will be thus if Keys’s career reaches a lofty height.

So there you have it: Australia Day, a holiday fit for sports in a sports-crazed nation, produced both a level of tennis and a caliber of storyline fit for a holiday.

Serena, Venus, Cibulkova, and Keys — these were the winners of four compelling matches. Tennis fans and the WTA were also winners on a very special Monday Down Under.