It sounds like the name of the local neighborhood alternative band who plays at the pub just around the corner from the grocery store: The Occasionals.

It’s the name I thought of for a certain kind of WTA player, inspired by the runs of Samantha Stosur and Kiki Bertens to the Roland Garros semifinals.

Regardless of what happens in Friday’s semifinal doubleheader, the French Open has been — at least in this century — the major tournament where more WTA players make rare breakthroughs to semifinals and (especially) finals.

Consider: Over the past nine French Opens, six women’s finals involved at least one player making her first appearance in a major final. (The list: Ana Ivanovic in 2007, Dinara Safina in 2008, Samantha Stosur and Francesca Schiavone in 2010, Sara Errani in 2012, Simona Halep in 2014, and Lucie Safarova in 2015.) If you look at most of the players on that list, some of them haven’t been back to a second major final, and a few others haven’t made a major final this decade.

You will note that Ivanovic made the Roland Garros semifinals last year. Had she won her semifinal against Safarova, she would have made a major final seven years after her previous appearance in 2008. This year, Stosur rates as an out-of-nowhere semifinalist. She hadn’t made the semis at any major since 2012, a span of 13 tournaments between breakthroughs. Yet, compared to Ivanovic last year, she’s a rather regular participant in major semifinals.

The Occasionals, as you can see, exist on different levels.

Consider a few other players from various decades to appreciate the dimensions of this slice of women’s tennis history at the majors.

Svetlana Kuznetsova enjoyed a fairly fertile period from her first major title in 2004 to her second in 2009. Yet, the simple reality of going five years between major titles represents — in itself — a knack for the occasional (not commonplace) achievement. Kuznetsova doesn’t represent the heart of this category, because she hasn’t made a major semifinal since that 2009 Roland Garros championship. Yet, she has played better tennis this year — if she does work her way back to a major semifinal within the next year and a half, the genesis of that revival could be pinpointed rather easily.

Two players who much more naturally embody what it means to be an “Occasional” in major-tournament tennis are Marion Bartoli (above) and Mima Jausovec.

Bartoli made the 2007 Wimbledon final, and didn’t get back to a major final until 2013, when she won Wimbledon in a demolition of Sabine Lisicki. Between those two major final appearances, Bartoli reached the semifinals or better in only one tournament, the 2011 French Open. That’s a trajectory of results which fits the nature of “The Occasionals.”

Jausovec, who represented Yugoslavia on the national state in the late 1970s and early 1980s, enjoyed a productive series of years from 1976 through 1978, but she ultimately made the semis or better in only five majors throughout her career (two more than Bartoli, a slight difference). She went five full years between major finals — the 1978 and 1983 French Opens — and made only one semifinal in between at the 1980 Australian, close to the middle of that time span.

We’ve covered a number of The Occasionals at various levels of achievement. Kuznetsova has enjoyed the best career of every player mentioned to this point, but one other player deserves recognition. She’s the highest-level performer in this group — not necessarily in terms of her full career, but in terms of being able to make deep major-tournament runs separated by several years, over a larger span of time. 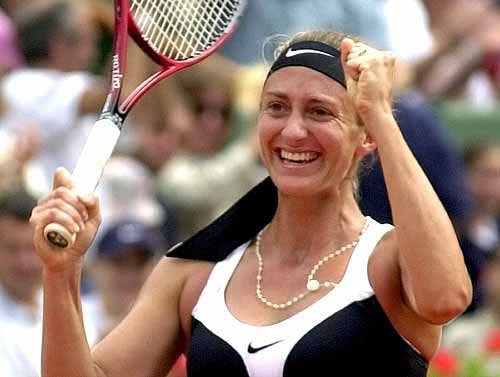 Mary Pierce had a knack for being able to rise from a quiet period at the majors and — at three distinct points in her career — make the final.

Pierce won the 1995 Australian Open several months after making the 1994 French Open final. Following that 1995 win in Melbourne, Pierce made only one semifinal-or-better appearance at the majors, the 1997 Australian Open. Given a long dry spell at the majors — not just in terms of wins, but deep runs — it was hard to think that Pierce (though seeded sixth) was ready to make her move… but that’s exactly what she did.

It was reasonable to surmise that Pierce, having won her second major, would have gained a great deal of confidence from such a powerful affirmation of her career and her talents. Yet, over five years and the next 15 majors she entered, she didn’t make a single semifinal. When she came to Roland Garros for the 2005 tournament, seeded 21st (which happens to be Stosur’s seed at Rolly G this year), she stood completely removed from the radar screen.

She promptly marched to the final before losing to Justine Henin. Pierce, displaying the (small measure of) staying power she couldn’t produce in 2000, built on her Roland Garros final by reaching the 2005 U.S. Open final, which she lost to a different Belgian, Kim Clijsters.

There’s a remarkable symmetry in Pierce’s career: Two major finals — the 1995 Australian and the 2005 French — existed 10 years apart. Those two finals were bookended by other major finals several months removed — the 1994 French on the front end, the 2005 U.S. Open on the back end. In the middle of the 10 years between the 1995 Australian and the 2005, she made only two finals and no other semifinals.

We’ll see what Samantha Stosur and Svetlana Kuznetsova do in the remainders of their careers. Will they gain a measure of consistency as a result of the good tennis they’ve played in recent months, or will they go through dry periods and resurface years later?

It would be the mark of the WTA tennis rock band known as… The Occasionals.