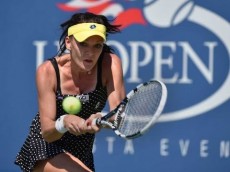 The biggest story from day three of the U.S. Open emerged in the women’s singles event, as Agnieszka Radwanska, the No. 4 seed in the draw and a player given a more-than-reasonable path to the semifinals, crashed out in the second round to Peng Shuai. The relatively meek 3-and-4 loss won’t eliminate the satisfaction Radwanska […]