The other match felt over well before two whole sets had been completed, and although it tightened up, it ended without an abundance of suspense.

Yet, the U.S. Open women’s semifinals on Friday afternoon at the Billie Jean King USTA National Tennis Center in Flushing Meadows, N.Y., provided rich and layered stories — the ones flowing from the two semis and the ones flowing into Sunday’s final.

The year’s last major tennis tournament served as the backdrop for a genuinely scary moment, but a moment that just might force the hard-to-govern sport of tennis to arrive at more precise and developed policies for player distress and trauma during a match. The circumstances in which the 2014 U.S. Open is situated make it that much more important for the organizers of the Grand Slam tournaments; the International Tennis Federation; and the WTA and ATP Tours to craft reforms in time for the 2015 tennis season.

This is only the first story to emerge from Friday. We’ll soon get to the Serena Williams-Caroline Wozniacki final that’s set for Sunday afternoon at Arthur Ashe Stadium. 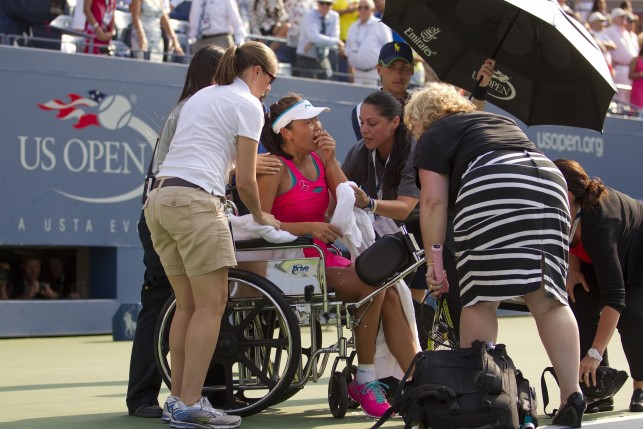 The most distressing and disturbing scene ever witnessed on a tennis court was — and probably always will be — the stabbing of Monica Seles in 1993. This was not an act of malice by another person, but Peng Shuai’s physical breakdown sent waves of fear through the global tennis community on Friday. The sport has to be nimble not only in crafting a policy to address this kind of situation; it has to be able to weigh and balance the dozens of considerations involved in such a situation.

Roughly two months ago, in wrapping up Wimbledon, Attacking The Net talked about a number of issues the tennis community — this collection of various groups with little in the way of organized central governance — had to confront. One of them (listed at No. 10 in the piece just linked to) was the issue of medical timeouts and the larger intertwining of various levels of care a player can (and should) receive at a certain point in a match.

This issue came to the forefront again in Friday’s first semifinal, as Peng Shuai’s body steadily lost more and more levels of functionality due to searing, humid conditions during her match with Caroline Wozniacki. The conditions in New York eclipsed the heat index reading at which “heat rules” are invoked, meaning that the two players are entitled to a 10-minute cooling-off break between the second and third sets… if the match goes to a third set. Wozniacki’s fourth-round win over Maria Sharapova this past Sunday was subjected to heat rules when Sharapova tied the match at one set apiece.

What happened? The basic timeline of events is that Shuai initially cramped at 30-all with Wozniacki serving at 4-3 in the second set. Wozniacki won the first set, 7-6 (1). Shuai took an extended amount of time before that 30-all point, and Wozniacki double faulted to give Shuai a break point. However, Shuai could not walk from the deuce court to the ad court to receive the 30-40 serve.

After a delay of more than a minute, a trainer came onto the court, near the linespersons’ boxes next to the back wall at the south end of Ashe Stadium’s playing surface. Shuai received a pill and some Gatorade, but she was unable to play another point. Chair umpire Louise Engzell announced that Shuai was being evaluated, a precise term different from treatment, which could have carried a different set of implications for how Shuai was supposed to be cared for according to the rules. Shuai was soon given a 10-minute medical timeout, after which she returned to the court, played a few points, and then collapsed. She was helped off the court in a wheelchair, shown in the photo immediately above. The match was brought to a halt, and rightly so.

What to make of all this?

Few people on #TennisTwitter are as informed about the ITF rules of tennis (which are used at the majors) as Victoria Chiesa, a tennis freelance writer and a contributor to Tennis View Magazine. Need a primer on this event and what was realistic as an in-the-moment solution to a very rare set of events?

These four tweets establish something of a framework:

She can't take a MTO for cramps. It's an off-court evaluation.

If they're letting her take a MTO, can't be cramps. But being forced to concede a GS SF bc she can't take a MTO for cramps would be absurd.

I've always said this rule needs looking at. You have *three* ITF officials looking bewildered as to how to proceed.

"All clinical manifestations of heat illness shall be considered as one (1) treatable medical condition." pg 17, ITF GS Rulebook.

I mean, if you don't want to believe me, you can read the whole thing for yourselves. pic.twitter.com/rrAkBZuzgE

Tennis fans and officials might be unified on some aspects of this situation and sharply divided on others. Treating this matter in full is a task better served for a separate conversation on a different day. The main point of emphasis is that the sport really needs to give serious attention to rule revisions and new rule formulations; sitting down WTA and ATP players to reach points of meaningful consensus; and getting a plan in place for 2015.

That may or may not be realistic, but when a player’s health really did seem to hang in the balance on Friday, as was the case with Shuai — who didn’t want to stop playing, drawing an imperfect but real parallel with a concussed football player who wants to keep playing — it’s clear the sport has to act. It can’t slap down a policy in a week or two, but it has about three and a half months.

Can grown-ups work that quickly? Peng Shuai deserves it.

Here’s the deeper backdrop to Friday afternoon’s first semifinal, which then gave way to a lopsided second semifinal in which Serena Williams clobbered first-time major semifinalist Ekaterina Makarova, 6-1, 6-3: This is the last year in which the women’s semifinals will be daytime matches. Next year, when ESPN takes over primary television coverage from CBS, the women’s semis move to prime time on Thursday night. You won’t see players suffering in the sun as they did on Friday. Moreover, with a roof scheduled to be placed over Ashe Stadium in the next few years (the plan is for the roof to be in place by 2017), the United States Tennis Association will have the option — as Tennis Australia does at the Australian Open — to close the roof if the heat index is too high.

This leads us to one very simple point about championship tennis: While many fans enjoy the visuals involved in seeing athletes struggle with conditions, such a reality turns sport into little more than a physical survival contest. In the 2012 U.S. Open men’s semifinals, a genuinely gusting wind — one far worse than what Roger Federer and Gael Monfils had to deal with on Thursday night in their quarterfinal match — turned an Andy Murray-Tomas Berdych match into a ditchdigging contest:

Both men were simply trying to shovel the ball back over the net, and little more.

Plenty of people will disagree, and they’re entirely reasonable to do so, but the verdict here is that tennis is supposed to be about who can hit a ball the best — cleanly, beautifully, powerfully, effectively. When excessive heat or wind get in the way of that, tournaments with domed stadia should be more — not less — willing to “put a lid on it,” so to speak. Establishing thresholds for “severe conditions” can provide a basic line between what’s allowable in open-air environments and what’s not. This can be a part of tennis’s future at the majors if tournament organizers want.

Now, on to Sunday’s final between Serena Williams and Caroline Wozniacki.

A few things you should know at the outset, starting with the most important items and then moving to the less important ones:

1) The match will start at roughly 4:40 p.m. Eastern time, at which shadows will cover most of the Ashe Stadium court (if the weather is sunny). These players won’t be in the sun, which will be a refreshing change for Wozniacki, who looked physically worn down for much of her semifinal against Shuai; her opponent obviously fared even worse, and to a considerable degree. The presence of shadows if the weather is sunny should bring forth better tennis, precisely in relation to what was said above: This won’t be defined as much by physical survival.

2) Williams and Wozniacki met in the quarterfinals of the Montreal tournament and the semifinals of Cincinnati. Williams won both matches, but she needed three sets in both instances, as Wozniacki landed a fair share of punches.  Wozniacki’s stronger and more textured hitting makes this match very much a contest. Serena’s form was magnificent against Makarova, but if Wozniacki feels comfortable, Serena will need her serve to be the trump card it so often is in a major-tournament final. If Serena’s serve is off, Wozniacki definitely has a good chance to win.

3) This is the lighter aspect of Sunday’s final: The two are really good friends, with the first photo being from Game 6 of the NBA Eastern Conference Finals, the night the Miami Heat punched a ticket to the 2014 NBA Finals:

Hopefully, after the fear of Friday, Sunday afternoon will be all about two friends having fun… and going after a major title.