Who knew that the big story of day two at the United States Open — which was not as boisterous and complicated as day one, but still provided some teasing, twisting matches such as Victoria Azarenka’s three-set escape against Misaki Doi — would come from a player who would refuse prize money in order to retain amateur status?

Catherine “CiCi” Bellis, whose last name — for Latin scholars — is the plural dative or ablative form of the word meaning “war,” fought past Australian Open runner-up Dominika Cibulkova on the brand-new Court 6 at the Billie Jean King USTA National Tennis Center on Tuesday afternoon. Bellis, playing in her first main-draw match at a major at the age of 15, evoked a lot of images for American tennis fans by ousting Cibulkova, 6-1, 4-6, 6-4, in front of a packed house that couldn’t get enough of her, as Victoria Chiesa showed #TennisTwitter:

The result rippled through the grounds at the BJKUSTANTC (that has to be the longest location-specific acronym in global sport, right?), and it naturally found its way to ESPN and the New York papers as well. You can imagine the buzz this result created… which is precisely why the point must be emphasized right now, up front and in plain English:

This is NOT a piece on how great CiCi Bellis is going to be or how fantastic this moment is for American tennis.

That’s not a proper focus for this piece or the moment which has given rise to it. It’s not the right attitude to bring to this very delicate situation, which Bellis is only beginning to confront.

Do you want a primer on Bellis as a tennis player? Courtney Nguyen of Sports Illustrated produced this essential collection of facts and notes.

If you aren't already impressed: Bellis fractured wrist at Wimbledon and had to turn down Stanford WC. Then won USTA G18s to earn spot here.

#Bellis RT @rosso_neri: She was 5 months old when Serena won her 1st slam!

That Cibulkova is a complete mess and was ripe for a 1R loss will get completely lost in this narrative.

Cibulkova is not the same player who made the Australian Open final and then performed reasonably well in the Indian Wells-Miami hardcourt swing from the spring. As you can see, she’s done essentially nothing since the month of April. Yet, even Cibulkova — for all of her struggles — was supposed to get past a player whose U.S. Open profile looks like this.  It says something about Cibulkova’s dark night of the tennis player’s soul that she lost. This point should not be ignored.

Yet, it obviously takes second place to the exuberance and joy of the winning player’s moment, at a point in her life when she can’t even legally drive a car.

A brief word about the match, for those who weren’t able to see its conclusion: Bellis — who had trailed, 3-1, in the deciding set — rallied to take a lead. She could have relented when, at 4-3 and love-30 on Cibulkova’s serve in the third set, she failed to secure the break that would have enabled her to serve out the match at 5-3. Cibulkova leveled for 4-4, and at that point, it would have been entirely understandable if Bellis faltered. Instead, Bellis went up 40-love and confidently held for 5-4. She broke in the next game, running Cibulkova around the court and eliciting a few tired errors from a veteran who has lost everything she once had in the winter and early spring. If you were going to imagine a set of circumstances in which a 15-year-old would defeat a veteran, that wouldn’t have been the first answer to come to mind. It’s just one of many reasons why this match, and this girl from San Francisco, have commanded center stage at America’s major tennis tournament.

It’s why the nasty forces of American media hype have to be tempered as well, and that’s the true focus of this piece.

A MATCH THAT RECALLS HISTORY… AND NOT IN A GOOD WAY 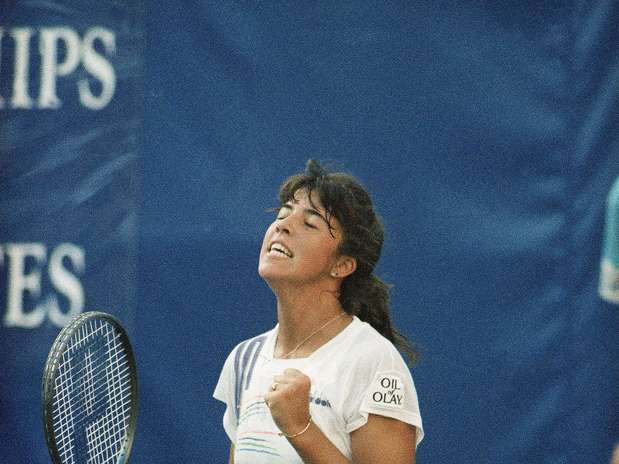 Jennifer Capriati was 15 years old — the same age as CiCi Bellis — when she engaged 17-year-old Monica Seles in a genuinely epic 1991 U.S. Open women’s semifinal. Capriati was not only far better than Bellis at 15; she was better than Anna Kournikova at that age. Kournikova was the last 15-year-old to win a U.S. Open in 1996, before Bellis was even born. Capriati’s career and life struggles serve as an instant cautionary tale for Bellis, Melanie Oudin, and any other teenager who tastes early success at the U.S. Open, planted in the media capital of the world and all its bright (camera) lights. The best thing Bellis can do is to not buy into an ounce of hype, even if she makes the media rounds during and after this tournament.

Last week, we looked at some of the most significant U.S. Open women’s matches of all time. One selection was the 1991 semifinal between Monica Seles and another American 15-year-old, Jennifer Capriati. That match ushered in reforms on how many professional tournaments players under the age of 18 could play. Yesterday during ESPN’s coverage of the aftermath of the Bellis win, analyst Pam Shriver referred to the tiered system in place on the WTA Tour, enabling players to play a gradually larger number of pro tournaments at age 16 and 17 before allowing full participation at age 18. This flowed from Capriati’s 1991 semifinal in New York and the years that followed.

Bellis’s victory, the first by a player her age at the U.S. Open since Anna Kournikova in 1996, recalls the avalanche of hype devoted to Kournikova in her time (largely for her looks), something which brings to mind what Eugenie Bouchard is currently facing these days. Granted, Bouchard has earned her hype by making two major semifinals and the Wimbledon final, but the race to market and publicize a young talent with a telegenic presence is impossible to miss.

Bellis’s win also brings to mind Melanie Oudin’s run to the 2009 U.S. Open quarterfinals and the media blitz which accompanied it. Oudin was not yet 18 when she pulled off that remarkable run. Yet, the New York media and national outlets such as The Today Show wanted to feature her and make the most of a news-cycle splash in a 24-7 world that just keeps whirling around. The beast needs to be fed, and few things feed that beast better than a lively, young (usually but not always blond) woman doing something great (or, on a much darker level and in a realm removed from sports, getting abducted).

It is important to underline these next few statements: This is not just about tennis hype or tennis celebrity, though the location of the U.S. Open in the New York metropolitan area creates a natural link between tennis news and media interest for these two-plus weeks in America’s most populous city. What CiCi Bellis’s big moment drives home is that Americans are obsessed with youth.

It’s not a news flash, mind you, but it’s the true driver of this level of buzz.

In American sports media, you might have seen or heard the uproar which emerged when FOX Sports NFL sideline reporter Pam Oliver was effectively demoted from her spot with the network’s top NFL broadcast team of Joe Buck and Troy Aikman. It’s not just among athletes or in the specific theater of tennis: In the worlds of media employment, swimsuit issue employment, modeling employment, and in our culture at large here in America, youth is one of the central altars at which corporations worship. Projecting an image as far removed as possible from old age is ingrained into our culture, probably more than anything else in American life. Fixated on convenience and instant gratification as we are, Americans are constantly bombarded with reinforcement of the message that you can trade one aging person/item/vision for another, that what was old can be made new, that what has become stale can be shipped out in exchange for something (or someone) fresh.

Don Draper, if teleported to the Madison Avenue of today and still on the job as an 80-year-old guru in the profession of advertising, would not deny any of this.

Also consider how, in recent weeks, ESPN limited its television coverage of the Canada and Cincinnati tennis tournaments to make sure it showed us the Little League World Series. Tennis fans naturally lamented the event, and they were right to do so, but Little League Baseball — valuable in no meaningful way other than to show the emotions of really young people — bested big-league tennis, among the sport’s top stars such as Roger Federer and Serena Williams, in the ratings game.

America, as a culture, is in love with national anthems before every sporting event. It is a nation in love with the big jet flyover and camouflage uniforms for baseball teams, especially the San Diego Padres of Major League Baseball.

Most centrally, though, our nation is in love with youth and all it represents. In a media context, however, this means squeezing every extra word of publicity, every extra interview, and every extra camera shot of The Next Big Thing… even if that 15- or 17-year-old athlete has many miles to travel before truly becoming (or even threatening to become) The Next Big Thing.

Be vigilant, CiCi Bellis. Your next big task is not your second-round match in New York. It’s the American media machine and the hype it wants to generate, whether rooted in a realistic appraisal or not