In an attempt to describe the experience of playing left field at Yankee Stadium during the World Series and its October afternoons, Yogi Berra said, “It gets late early out there.”

For Stanislas Wawrinka, this was no October afternoon, but a late May evening in Paris during the longest days of the year.

It was a long day for Wawrinka, to be sure.

What was supposed to be a springtime of continued improvement turned into a familiar nightmare for the Swiss. Wawrinka, who won the Monte Carlo Masters in April, was a favorite to make his first French Open semifinal and give Rafael Nadal a good run in a best-of-five match. However, an implosion on Court Philippe Chatrier brought back a number of old demons. Suddenly, the 2014 Roland Garros men’s tournament has already cracked open in one quarter of the draw.

Just two days into this tournament, a part of the ATP bracket has been busted. Wawrinka, the Australian Open champion and a recent U.S. Open semifinalist, had begun to play the major tournaments at a very high level. His 6-4, 5-7, 6-2, 6-0 loss on Monday evening to an inspired Guillermo Garcia-Lopez will force tennis pundits to readjust their readings of the ATP Tour. It was the kind of match that reminds tennis fans how internal a sport this really is. 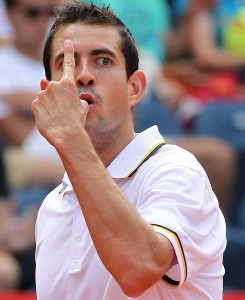 Things are definitely pointing upward for Guillermo Garcia-Lopez after a victory that could propel him to the second week of a major for the first time. The Spaniard has never reached the fourth round of a major. He could go that far and then some in Paris, now that he’s knocked off third-seeded Stan Wawrinka.

First, it’s necessary to tell the story of how solid Garcia-Lopez was. “Solid” can, in the eyes of some observers, be a lazy word, a word meant to convey the idea that a player or team didn’t do anything special. That’s not quite a fair description of Garcia-Lopez’s performance on Monday, even though Wawrinka’s collapse should rightly be seen as the more central source of this match’s final scoreline.

Garcia-Lopez was “solid” in a slightly more elevated sense: He erected a barrier on slow red clay on what was a rainy and humid day in Paris. Cooler conditions on a shade-covered court (the match started after 6:30 p.m. local time in Paris) were conducive to a patient game, and Garcia-Lopez was consistently the more patient player. He not only exhibited a much better feel for when to hit a harder shot and when to hold back; the Spaniard moved much more fluidly than Wawrinka along the baseline. In particular, Garcia-Lopez was able to make defensive retrievals without sacrificing too much depth.

On dozens of points in this match, Garcia-Lopez turned defensive positions into neutral or winning positions by hitting a defensive shot behind the service line, denying Wawrinka an easy short ball to put away. Especially in the final four games of the match, Garcia-Lopez outfoxed Wawrinka in rallies. Seeing the prize that was within his grasp, the Spaniard finished with a flourish. Garcia-Lopez played a smart match tailored to the circumstances and his opponent. He made Wawrinka hit three or four extra balls, and the No. 3 seed frequently sent that third or fourth shot long, half a foot behind the baseline.

It’s also worth noting that Garcia-Lopez always did represent an appreciably formidable first-round opponent. His playing history indicated as much. He also pushed Novak Djokovic to three sets in the quarterfinals of Monte Carlo over a month ago. This was not a player outside the top 100 scoring a flukey win. This was a good player remaining steady against an opponent who had won his first major and his first Masters title in 2014.

Yet, for all the ways in which Garcia-Lopez earned copious quantities of praise, this match was indeed more (not too much more, but a little more) about Wawrinka’s fall from the Swiss Alps. Once on the mountaintop in both Melbourne and Monte Carlo, Wawrinka came to this major and looked the part of a player unprepared for life as a prime contender at one of tennis’s most prestigious tournaments. Not expected to make the semis in New York and not expected to beat Novak Djokovic in Australia, Wawrinka wore a big, fat target coming into Paris.

Leaking errors from both wings and littering the court with sloppy play, Wawrinka donated enough cheap points to reduce Garcia-Lopez’s workload. The Spaniard dazzled on several points throughout the match, but for every point Garcia-Lopez claimed with his brilliance, Wawrinka surrendered two points with sluggish footwork and a constantly unsettled court presence.

You can say that narratives are overrated and that match results can be overreacted to (both statements are true more often than not), but in this case, the conclusion which seems obvious at first glance is the proper one to make. Wawrinka wasn’t mentally ready for this major — he surrendered 12 of the last 14 games in 60 minutes, bowing out meekly and not even mounting much resistance at the end. He has made it hard to refute the notion that he’s not ready to be a consistent, every-tournament force, at the majors or anywhere else… at least not yet.

In the tennis community, few expressions get fans more riled up than a reference to “The Big Four.” Over the past several years, it had been easy to define the Big Four as Nadal, Federer, Djokovic, and Murray. A subset of the tennis community thought Murray didn’t belong in that crowd until he won a major. When Murray then got injured after his Wimbledon title last year, Wawrinka entered the Big Four discussion. He did snag his first major in Australia, thereby meriting consideration as a new member of the sport’s elite. The question became, “Just how much stature should be accorded to Wawrinka?”

Clearly, Wawrinka should be held in higher regard than the likes of Jo-Wilfried Tsonga, Tomas Berdych, and other major-less players who have fallen short in big tournaments. The debate lay in the “Big Four” realm, and whether Wawrinka deserved to supplant Murray. Part of the confusion here concerns the notion of whether membership in an exclusive club should be based on a few months or a few years of performance. Should a present-moment distinction be rooted in short-term or long-term developments? It’s a fair question.

What’s the significance of this loss, then?

It’s not hard to come up with an adequate answer: Wawrinka’s setback severely undercuts the notion that he’s forged an entrenched place at the top of his sport’s pecking order.

What we’re left with is a needed readjustment to how the current power structure in men’s tennis should be viewed: There really isn’t a Big Four at the moment. This is a Big Two — Rafael Nadal and Novak Djokovic. The Swiss guys (Wawrinka and his Davis Cup pal, Roger Federer) are contenders, but they’re not in the same league in terms of relentless week-to-week consistency on tour.

There are so many other stories and possibilities to consider as a result of this landscape-changing event: Andy Murray now has a chance to make the semifinals, as does Garcia-Lopez. Several other players have a great shot of making a first major semifinal and racking up a big gain in rankings points. Nadal faces an easier semifinal matchup, assuming of course he gets that far.

Yet, those stories will play out over the next two weeks. The story that’s already written into the red clay of Roland Garros is that Stan Wawrinka, so shaky in Davis Cup a month and a half ago against Kazakhstan, remains a volatile player. He’s shown that he can reach higher highs than ever before, but his capacity to plummet to the lowest of lows has not been eradicated by his new taste of big-tournament success.

Is this a severe reaction to one tennis match? It’s fair to consider the question. Yet, the better verdict seems to be that his match carried severe consequences that are being reacted to in an obvious — but appropriate — manner.