The story of a memorable gentlemen’s singles final at Centre Court Wimbledon begins in Melbourne, Australia, on January 29, 2012.

On that night, Novak Djokovic won the Australian Open final, 7-5 in the fifth set over Rafael Nadal. Djokovic was so close to winning in four sets, but Nadal uncorked a string of clutch points to dig out of a 3-4, love-40 deficit and level the match at two sets apiece. Nadal gained a 4-2, 30-15 lead — with his serve — in the final set, and most of the people in the building (and watching on television) felt the Spaniard would reach the finish line first.

Yet, somehow, Djokovic was able to engineer a plot twist and fight back to win the match in 5 hours and 53 minutes. On that night, Djokovic won his third consecutive major and his fourth in five tries, beating Nadal in a third consecutive major final as well. Just one month into 2012, at age 24, Djokovic had collected five majors. It seemed as though the Serbian sensation was well on his way to 12, 13, 14 major titles. He had, at the moment, surpassed Nadal. He had become the toughest out in tennis, the player who could not, would not, did not, submit. The sky was the limit for him…

or so it seemed.

In the 2012 French Open final, with a career Grand Slam hanging in the balance, Djokovic double-faulted on match point and lost to Nadal. That moment — not just the loss, but the way he lost it — took some starch out of the one nicknamed “Nole” (pronounced “No-lay”). Djokovic proceeded to become a far more inconsistent player at the business-end stages of major tournaments. His return game faltered against Federer in the 2012 Wimbledon semifinals. He couldn’t handle the wind in the 2012 U.S. Open finals against Andy Murray. The Australian Open — his one sanctuary over most of the past four years — lifted him up in 2013 for his sixth major, but then came the close losses again.

A speech-robbing net violation cost him in the 2013 Roland Garros semfinals against Nadal (essentially, though not technically, the final in that year’s tournament). He couldn’t do anything with soft second-serve returns against Murray in an erratic 2013 Wimbledon final. Djokovic was carrying the run of play late in the third set of a tied U.S. Open final against Nadal, but a brief loss of concentration enabled Nadal to take the set and then the match in four. As 2014 began, Djokovic’s streak of 14 straight major semifinals came to an end. The Serb missed too many volleys in crucial situations against Stan Wawrinka in the quarterfinals of the Australian Open. Djokovic then completed a circle of sorts by double-faulting again on match point in the 2014 Roland Garros final against Nadal.

Two and a half years since the 2012 Australian Open final, Djokovic — for all of his consistency, excellence and fight — had nudged his major-championship count from five to six. It’s not what he — or the global tennis community — had expected.

Entering Sunday’s 2014 Wimbledon final against Roger Federer, Djokovic had to look deep inside his mind, empty it, and find a way to attain clarity in supremely important moments. It was the single thing which had prevented Djokovic’s already-legendary career from rising to that higher pantheon, the one occupied by the Federers and the Nadals.

By the Borgs. The Samprases. The Lavers. The Pancho Gonzalezes. The Bill Tildens. The Don Budges.

Novak Djokovic did have to conquer one of the sport’s greatest champions and Wimbledon kings on Sunday. More centrally, though, he had to conquer his own doubts and demons, the pesky inner voices that steered him off the tracks over the past two and a half years of major finals, save an aberrational win in Melbourne at the beginning of 2013.

For the first two and a half sets of this match, Djokovic became the mental titan unseen in major finals for most of the past 30 months. He did blink at 6-5 in the first-set tiebreaker, but he responded to that achingly brief misstep by taking the second set in commanding fashion and then establishing a steadier brand of ball in the cauldron of a third-set tiebreaker. Federer had won third-set tiebreakers in five Wimbledon finals — 2003, 2004, 2007, 2008, and 2009 — and he won four of those matches. Federer figured to need the third-set breaker to find the finish line, but Djokovic stood taller in that pressure-cooker, ripping a clutch crosscourt forehand at 5-4 and then outlasting Federer from the backcourt on set point at 6-4.

As most observers expected, Djokovic turned up the heat in the fourth set while Federer weakened. At 5-2, Djokovic had the match in his hands, and when serving at 5-3, he had the title on his racquet. A mental masterwork reflected Djokovic’s game and his demeanor until that point. There was nothing to suggest that Serbia’s most iconic global athlete would blink.

Then came the old major-final demons from years (and months) past. 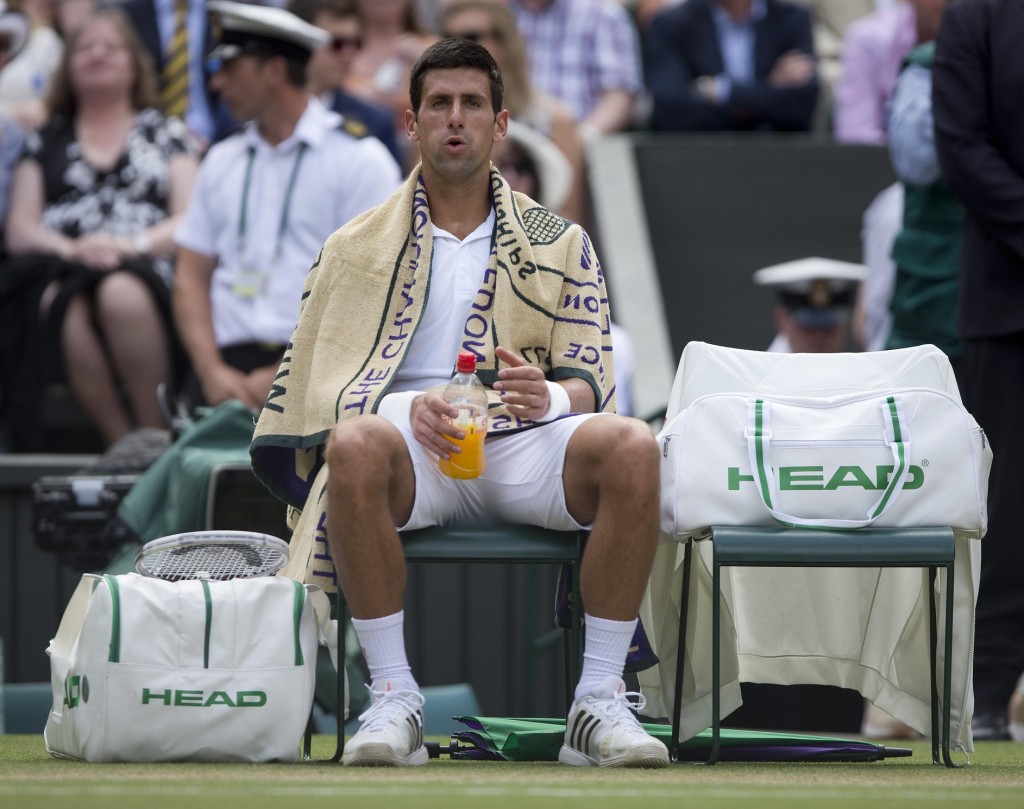 When Novak Djokovic sat in his chair after the end of the fourth set, what must have been going on in his mind? His ability to meet that fourth-set disaster with a fifth-set triumph makes this Novak Djokovic’s finest hour on a tennis court.

Djokovic lost a forehand long on the first point at 5-3, opening the door to his ghosts and goblins. He fell behind love-30, and though he fought back to 30-30, Federer — who had been missing with and/or eschewing his down-the-line backhand all day long, one of his few but significant deficiencies — finally cracked a pair of down-the-line dazzlers from that wing to break back for 4-5. After Federer held for 5-5, Djokovic donated his next service game by leaking three errors for love-40 and allowing the voices in his head to take over. When Federer served out the set at 6-5 a few moments later, Djokovic found himself right back in the situation he faced against Nadal in Melbourne two and a half years ago.

The fourth set had been improbably lost. A fifth set loomed against a giant of the sport. Indicators were not pointing in Djokovic’s direction.

The difference going into this fifth set was that Djokovic hadn’t been finishing off opponents in major finals the way he did against Nadal in the latter stages of 2011. This time, Djokovic’s recent history in these kinds of situations had been hellish and haunting.

The enormity of the psychological test in front of Djokovic could not have been bigger. The tension between complete vindication and total devastation was as exquisite as one could possibly imagine. Yes, Federer fought back with the pride and heart of the champion he is and always will be, but the psychological centerpiece of the fifth set was going to be Djokovic, in light of the way the fourth set concluded.

Spectators at Centre Court and a global television audience found out just what Novak Djokovic was made of in that fifth set.

At 3-3, 30-40, Djokovic faced a break point which felt like a mini-match point. Federer’s tennis home is Wimbledon, a place where he was gunning for an unprecedented eighth men’s singles title. The boost of belief the Swiss would have received from a break at 3-3 likely would have proved to be decisive, though in fairness, it should be said that this match threw one curveball after another at the prevailing conventional wisdom.

On that break point, Djokovic was worthy of the moment… and as it turned out, the 2014 title at The Championships. A strong body serve on a first ball jammed Federer, setting up an easy point. Djokovic’s serve didn’t load up the number of aces Federer gained on Sunday, but it still carried him through four of the match’s five sets. With Djokovic being able to keep his nose in front on serve, he was able to be bold with his return game, and on the first point of the 10th service game in the set — with Federer serving to stay in the match at 4-5 — Nole made his move.

On that point, Federer hit the corner of the service box on a flawless wide serve from the deuce court. Djokovic didn’t just get the ball back — he read the serve perfectly and generated both pace and depth on the return. Federer did well to shovel the ball back to the middle of the court, but Djokovic was able to retrieve that reply and gain a winning position. Federer netted at defensive, retreating slice backhand, and with that point, Djokovic applied a massive dose of match pressure to Federer and his serve.

Then came the other point that saw Djokovic home to the winner’s circle. At 15-30, Federer produced a brilliant second serve kicker to the wide corner of the service box, dragging Djokovic just beyond the doubles alley. Federer received the subsequent crosscourt return in his own ad court, and he properly directed a backhand down the line. However, he wasn’t able to flatten out the shot as much as he would have wanted to. Djokovic again turned a defensive position into an offensive position, overwhelming Federer with his return game. At 15-40, Federer needed the ace or service winner that had enabled him to stay alive for four-plus sets, but Djokovic the returner — after losing a lot of battles throughout the day — got the better of Federer the server. The match’s central tactical conflict tipped to Djokovic in a tipping-point moment, and just like that, you could see the demons leave the Serb’s body.

His childhood coach, Jelena Gencic, died roughly 13 months ago. He is to be married to his longtime girlfriend, Jelena Ristic, later this year. The couple is also expecting to welcome a child into the world — Djokovic did ask Federer about the experience of being a father earlier this week, in fact. These and other events in his personal life might have been just enough to rob Djokovic of the inner peace needed to close down major finals, but that’s pure speculation. What’s real, proven and true is that whatever might have gotten in his way over most of the past two and a half years, Novak Djokovic swatted it out of his path on Sunday at Centre Court Wimbledon.

The demons are gone. The doubts have been silenced.

There are no guarantees in life or in sports — just ask Federer, who earned a major final at a point in time when many doubted his ability to pull off such a feat. However, this victory just might be the cathartic occurrence which will enable Djokovic, 27, to find one more particularly prosperous stretch in his career as he moves toward age 30. 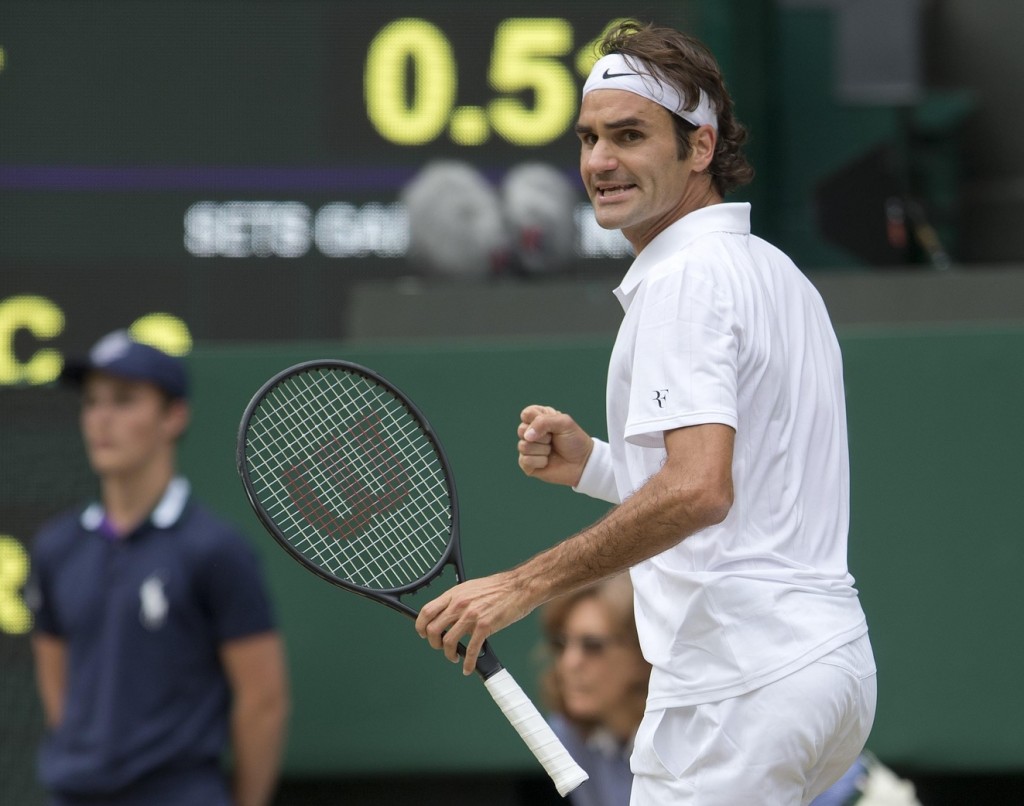 Roger Federer, climbing uphill for most of a five-set match against a generally superior player, brought to mind his similarly dogged maximum-length loss to Andy Murray in the 2013 Australian Open semifinals. Federer’s image on the surface is one of elegance, but the Swiss, an old man in tennis terms, continues to show just how well he can fight and scrap in moments of importance. He didn’t lose this match; Djokovic pried it away from him at the end of the fifth set.

Roger Federer turned back the clock at this Wimbledon — more will be written about him in Attacking The Net’s wrap-up of The Championships. Federer recaptured so much of the greatness that has defined him as one of the all-time greats. The way he competed — even more than the way he played — showed that an old man in tennis terms can still access the beautiful brushstrokes that won the hearts of many in his more youthful days.

Yet, the main story of a tension-soaked Sunday inside the cathedral of tennis is that Novak Djokovic recaptured a champion’s knack for finishing the job. It’s true that he shouldn’t have needed a fifth set to win a second Wimbledon title, but the fact that he won in this not-so-straightforward manner could actually be the best thing for Djokovic in the years ahead. The man with the great return game has returned to the top of his sport. He’s now once again No. 1 in the world, No. 1 at Wimbledon, No. 1 in the ultimate dialogue known as a major-tournament final.