It was a memorable Tuesday afternoon at the All-England Lawn Tennis and Croquet Club. Two significant upsets visited SW19. On the men’s side of Wimbledon, Nick Kyrgios had no mercy in his takedown of Rafael Nadal. A write-up of “Kyrgios Eleison’s” victory can be found here.

A few hours earlier, on the same hallowed patch of Centre Court lawn, the women’s tournament witnessed another significant upset, as Angelique Kerber — providing the nation of Germany with its best performance of the week on grass — denied Maria Sharapova the chance to advance to yet another Serena Williams-free quarterfinal at a major tournament. When Serena bowed out of the event on Saturday, Sharapova became the legitimate (though not heavy) favorite in the tournament, but Kerber’s win resets the calculus and creates a new dynamic heading into the final few days of the tournament. Petra Kvitova, who won her quarterfinal on Tuesday night over Barbora Zahlavova Strycova, is now the only player left in the women’s field who can be a repeat major champion. Everyone else still alive in the draw would be a first-time major champion, just like Marion Bartoli last year.

For now, though, what was by far the most impressive part of Kerber’s win, in one of the two matches of the tournament on the women’s side (along with Petra Kvitova’s win over Venus Williams last Friday), was that she defeated Sharapova the way Sharapova typically defeats other players in pressure-cooker situations.

Scorelines in tennis can sometimes tell lies, but not on the first of July. Kerber’s 7-6 (5), 4-6, 6-4 triumph was as difficult and grueling as it looked. In a match that acquired the texture of a second-week showdown at Wimbledon — with the court playing more slowly and defense winning points almost as often as offense — Kerber defended just a little bit better. More to the point, she matched Sharapova’s intensity and was able to draw just enough errors from Sharapova’s racquet because of her ability to shrink the court.

It’s Sharapova who has used red clay to turn defense into a weapon, forcing opponents to hit several extra balls and ultimately failing in the attempt. It’s true that Sharapova unleashed brilliant shotmaking to eclipse Simona Halep in a spectacular Roland Garros final on June 7, but most of her run in Paris — like the past three years of transcendent play on clay — has been built on movement and an ability to force opponents to hit fast-paced shots again and again under match pressure.

In this match on grass, Sharapova didn’t even face the serving struggles that sometimes weighed her down in Paris. In fact, Sharapova’s serve was rock-solid on each of the first six match points she faced late in the third set. Sharapova’s first serve got so much work done for her; had you told the French Open champion and her coaching team that she would serve as well as she did — 71 percent of first serves made, only two double faults — Maria’s camp would have been more than optimistic about her prospects.

Yet, we’re sitting her tonight talking about a Kerber victory. This begins — but only begins — to give one a sense of how well Kerber competed and executed at crunch time. 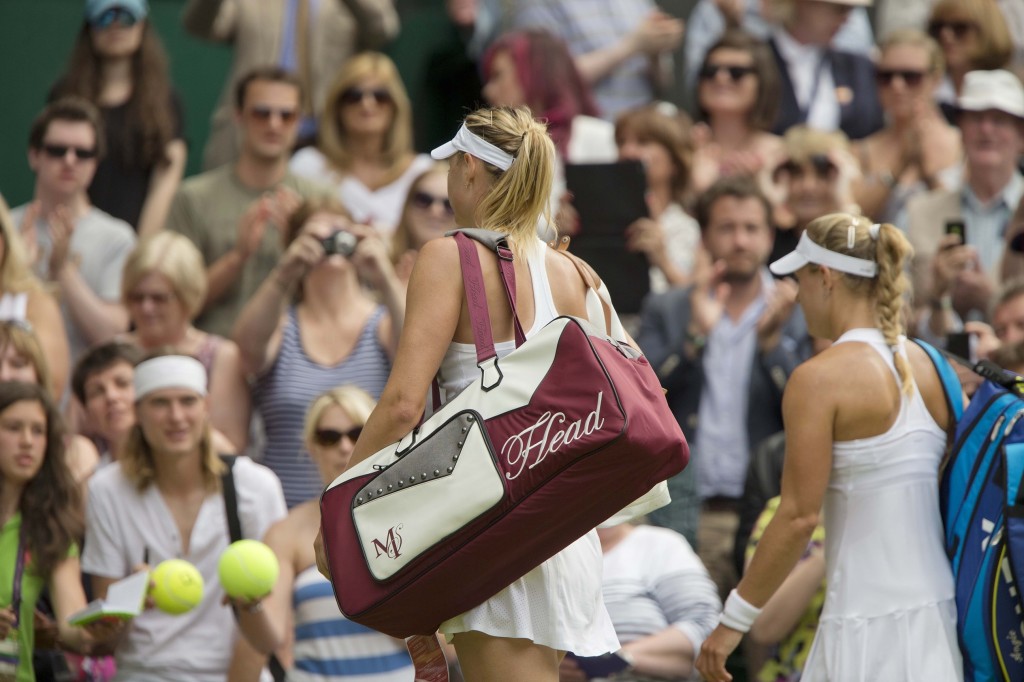 Maria Sharapova competed with the same tenacity everyone in tennis expects from her. She didn’t fail so much as Angelique Kerber rose to a higher level after several months of inconsistent results. Tuesday afternoon offered a surprise, but the reality of said surprise doesn’t mean this was a fluke result or something that wasn’t primarily the product of Kerber’s steel under fire.

The most apt description of the match came in this nifty little expression from a member of Tennis Twitter.  There really is a lot of Charlton Heston in Sharapova — you really do have to wrest matches out of her cold, dead hands. Not many on the WTA Tour can do so with great regularity. Serena and Victoria Azarenka are the two who have most consistently managed to do the deed at the majors in recent years. Others on tour have picked off Sharapova at the non-French Open majors, but not with the frequency established by Serena and Vika.

Kerber, it needs to be said, did not enter this match or Wimbledon with a particularly strong collection of results. Look at her results on the WTA’s website — the German was essentially a round-of-16 player at tournaments big and small, sometimes reaching the finals of lower-tier tournaments but not going past the quarters. Though the seeding difference was only four spots in this match — Kerber at 9, Sharapova at 5 — any comparison of experience, major-tournament chops, and recent form suggested that even though Sharapova was no longer on her beloved red brick, she still had the edge and would figure out a way to prevail. When Sharapova fought off one match point at 2-5 in the third set and then broke Kerber to get back on serve at 4-5, it seemed that she was again on the path to a tough three-set win, the kind of win she loves to produce… largely because she’s done it so many times before.

After more than two and a half hours of extended, sprawling combat, there was a palpable feeling inside Centre Court that if Sharapova could level the match at 5-5 in the third, she’d be able to leverage the situation to her advantage and move into the quarterfinals to face Eugenie Bouchard, creating a rematch of their semifinal in Paris a few weeks ago. Kerber, given a chance to break Sharapova’s serve for the match right after failing to serve out the match herself, had to know that she needed to end the proceedings right there and then. What followed was a fascinating psychological tug of war which, at the end of a breathtaking competition, carried the on-court drama to an even higher level.

On a succession of five match points, Sharapova produced either an untouchable first serve, a strong first serve that set up an easy winner, or a dazzling groundstroke winner near the baseline. Tennis fans lament a player’s inability to convert break points all the time, but if the opponent is saving them with great play, that’s not the receiver’s failure. It’s the server’s success.

On almost every successive deuce point in that 4-5 game, however, Sharapova either missed her first serve or allowed a groundstroke to fly out of control. On grass, unlike clay, it is more essential to take the initiave on points, as explained in this commentary on the Petra Kvitova-Venus Williams match last Friday. Sharapova played well on Tuesday, but on just enough occasions to matter, her attempts to take the initiative led to errors. Kerber gained just enough comfort as a defender to make some outrageous gets and apply consistent pressure to Sharapova as a result.

Usually, Sharapova gets back the extra ball and watches her opponent misfire. This time, the roles were reversed, especially on most of the deuce points in the game’s final match. Kerber occasionally uncorked a jawdropping winner, however, incorporating just enough pace and angle into her shots to take Sharapova out of her natural strike zone. This relentlessness from the German created a seventh match point, and on this point, Sharapova fired a groundstroke long. It was a lucky seven for Kerber, and a victory which brought her within one victory of a third major semifinal and her second at Wimbledon (2012).

Maria Sharapova took Centre Court with the established credentials and the glistening reputation on Tuesday, but Angelique Kerber engaged her globally famous opponent with an equal amount of hunger and hustle. It’s not easy to beat a proven tennis champion in the very manner that champion relies on, but Kerber won on her foe’s terms.

There are no regrets for Sharapova — she left everything on the court, as she always does in victory or defeat. In a special women’s tennis match, her opponent was simply able to draw from the Russian’s time-tested formula.