We’ll look at this topic from the men’s side tomorrow, but we’ll get started with the history of women’s tennis at Roland Garros. These are not the five best women’s matches in Roland Garros history, though some of the entries on the list would certainly qualify as such. There’s something different about the most significant competitions in any sport. A basic way of looking at this notion of “significance” is to ask the question, “What five women’s matches at Roland Garros substantially changed the way history was written or at least allowed fundamental tennis conversations to acquire a dramatically different trajectory?

Before there was Arthur Ashe, Althea Gibson became the original tennis trailblazer for African Americans. Gibson won two Wimbledons and two U.S. Opens, but this was her first major championship. Jackie Robinson’s 1947 Major League Baseball season is rightly seen as the stuff of legend. American sports fans revere the 1966 Texas Western men’s basketball team for what it did to change the face of college sports in the United States. Althea Gibson’s career should be seen in the same light and held on the same plane. This triumph, with a thematically appropriate death-march of a second set after an easy first set, underscored the reality that Gibson’s ascendancy was anything but easy. She rightly stands as one of tennis’s great barrier-breaking athletes, and this was the moment she stepped into the circle of major champions in her sport.

This match’s level of significance won’t be fully felt for some time. Simply stated, this was the first major title won by an Asian player of either gender. Li Na then won the 2014 Australian Open to show that she wasn’t a one-hit wonder. Driving interest in tennis among Chinese viewers and the Far East in general could open up a massive new market for the sport. The impact of Li’s triumph three years ago — and her ability to sustain a solid career since then — can’t be known right now. However, the weight of the achievement felt quite profound on that afternoon in Paris. It still feels just as big today. 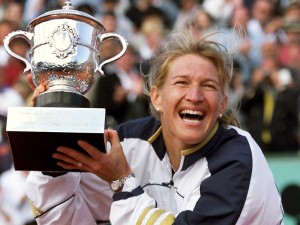 Steffi Graf was never happier or more radiant during her legendary career than in this precise moment, captured in an iconic and unforgettable photograph.

The final three entries on this list can all be grouped together in this respect: They all did much to shape or re-shape the debate(s) surrounding the best female singles player of all time. Serena Williams deserves to be in this conversation. So does Margaret Court. So does Billie Jean King. So does Helen Wills Moody. However, for a long period of time, the three centerpieces of the discussion have been Steffi Graf, Martina Navratilova, and Chris Evert.

This match is significant because it gave Graf — to use a Peter Bodo term — a “warrior moment,” a feat forged more by perseverance and intangible interior qualities than raw ballstriking or pure technical prowess. Graf had not won a major since the 1996 U.S. Open. She would retire just a month later after losing the 1999 Wimbledon final to Lindsay Davenport. Her ability to somehow escape death in the second set and prevail over a rattled Hingis in the third gave Graf a magnificent final flourish to a spectacular career.

One could make some significant comparisons between this title for Graf and Roger Federer’s 2012 Wimbledon crown. No, Federer obviously didn’t retire one month after that championship (many fans thought he should have retired in the summer of 2013 — I digress…). That’s a parallel which doesn’t exist. The clear connection is that much as the tennis community wondered in 1998 and early 1999 if Graf would ever win another major past her prime, so it also was that many expressed the same thoughts about Federer. Graf’s ability to conquer the rest of women’s tennis one last time before exiting stage right offered — and still offers — powerful reason to view her as the greatest female singles player ever.

The final two entries on this list are matches that brought a maximum of both significance and quality to the table. These are, in the minds of many, the two best Roland Garros women’s matches, the epics by which all other matches are measured.

Monica Seles defeated Steffi Graf in the 1990 Roland Garros final, so this was Graf’s moment to strike back and show that she could wrest away clay-court supremacy from the teenage sensation who had taken the sport by storm. (Seles is only 40 years old today. Think about that.) Clay-court tennis requires a great deal of physical fitness and the mental strength to match it. Harmonious mind-body dualism lies at the center of peak athletic performance. What stands out about this match and its 10-8 third set is that Seles, at age 18, had the calmness between the ears to stare down a determined giant of women’s tennis squarely in her prime. Seles’s ability to fend off Graf on clay — before being stabbed in 1993 — is one of the central reasons many tennis historians lean to Navratilova and not Graf in the contentious and anything-but-clear “GOAT” debate in women’s tennis.

If “Seles d. Graf in 1992” bolstered Navratilova’s case as the best female tennis player of all time, this match bolstered Evert’s case while putting a dent into the overall resume of her longtime friend and rival.

Navratilova had won 8 of the previous 11 majors entering this clash with Evert. If Evert owned the latter half of the 1970s and the very early 1980s, Navratilova took over beginning in 1983. She had surpassed Evert on an overall level, and in 1985, everyone in tennis wondered if Evert’s clay-court mastery could thwart Navratilova’s dynamic and overpowering athleticism on a surface not conducive to an attacking, serve-and-volley game.

These two immortals of the sport produced a match that matched the hype (and might have exceeded it), but in the end, Evert was able to defend the terre battue where she made her mark as a pro. Between the red clay of Roland Garros and the green clay used at the U.S. Open from 1975 through 1977, Evert won 10 clay-court majors, a majority of her 18 major singles championships. Evert’s ability to still prevail on clay when Navratilova had become the more ascendant player is something that tennis historians cannot ever forget. This is a core reason why the Evert-Graf-Navratilova debate remains as difficult today as it was when Graf retired in 1999.