The first week of a tennis major is cluttered with stories, due to the sheer volume of matches. As the field of 128 is narrowed to the round of 16 or the quarterfinals, the first-week headlines generally emerge in two forms: the upsets of the higher seeds and the unexpected successes of comparatively unheralded or unknown players. If a top seed quietly moved through the first week, it’s generally not worthy of a headline; the second weeks of majors are about the big boys, but the first weeks are for the rest of the field. Here, then, are the top 10 stories for the men’s tournament at Roland Garros entering Monday morning’s play. Any results from the early stages of Monday’s schedule are not included in this review, and will be part of next Monday’s tournament wrap-up here at Attacking The Net.

10 – DIMITROV’S “GRIGORIAN CHANT” IS A LAMENTATION

The Bulgarian had begun to turn potential into results in 2014. He reached the quarterfinals at the Australian Open, followed by winning a hard-earned title in Acapulco (an ATP 500 event) and a semifinal paycheck in Rome. His first-round loss to Ivo Karlovic put the brakes on his season. If he doesn’t make the second week at Wimbledon, he’s going to be very disappointed… or at least, he ought to be. Dimitrov began the year as the most ascendant member of the “young guns” crowd on the ATP, but at Roland Garros, another person in that group moved forward. That’s the next person on this list of top stories:

The draw for Milos Raonic in Paris was not quite easy-bake, tasty-cake the whole way; Gilles Simon in the third round was a tough match, and Raonic needed the Frenchman to lose focus in order to win that “road match” in Paris. However, Simon did cooperate, and as a result, Raonic was able to face unseeded Marcel Granollers in the round of 16. Raonic took advantage of the opportunity, and as a result, he’s made his first major quarterfinal, becoming the first Canadian man to register the feat. Raonic has not been spectacular at this tournament, but he’s taken care of business on a relatively weaker surface. He’s definitely making forward strides under coach Ivan Ljubicic. It does seem that he’ll be part of the top 10 to 15 players on the ATP Tour for a long time. That kind of statement couldn’t have been made with complete confidence a year ago.

The continent didn’t blow anyone away in Paris, but it wasn’t embarrassed this time around on red clay, as it so often is. Raonic carried Canada into the quarterfinals at the men’s tournament, and John Isner — going 6-2 in tiebreakers, following the formula he needs to adhere to in order to make the second week of a major — cracked the round of 16. Jack Sock made the third round, a terrific showing for him. Combined with its successes on the WTA Tour as well, North America stood its ground a little bit better in the City of Light. Is this a low standard to set for the continent? Quite possibly. Does it still rate as news? As the French would say, “Oui.”

The volatile, volcanic (Vesuvian, one might say?) Italian was actually taken seriously as a darkhorse contender on terre battue — this is not a misprint. He did reach the quarterfinals of the 2011 French Open… only to then give Novak Djokovic a walkover. Fognini’s body is brittle, and his mind is 10 times more fragile than his frame. He and Gael Monfils provided another five-set piece of absurdist theater on Saturday in the third round, four years after a similar carnival ride of craziness. Monfils tanked the fourth set, and yet Fognini crumbled in the fifth. This is not a player worth taking seriously at Roland Garros or any of the other tennis majors. Enough with the hype and hopefulness surrounding this talented but erratic individual, who has supplanted Ernests Gulbis as a conductor on the Crazy Train Express.

The Donald Young seen this past week in Paris is a player who will eventually make the second week of a major on a regular basis. Young’s ballstriking ability has always been evident, and his desire to succeed regularly manifested itself on the court. However, there’s a difference between wanting to win and doing the things that put yourself in position to win. At this tournament, Young’s body language and court demeanor were far more composed and contained than in the past. He slugged for five sets with a legitimately good clay-courter, Spain’s Guillermo Garcia-Lopez (slayer of Stan Wawrinka in the first round in Paris), before losing honorably. Young owns the shots; if the maturity seen in Paris can travel to all tournaments on tour, the American will be able to make himself a part of the second-week mix at majors for many years.

Philipp Kohlschreiber’s 12-10-in-the-fifth-set loss to Andy Murray was a noble loss, a good loss, the kind of loss that doesn’t create many regrets in itself. However, the quality of the German’s effort against an elite player only serves to remind the tennis community how much Kohlschreiber has squandered over the years. No player with the ability to hit just about every kind of shot — in terms of pace, trajectory and spin — should have only one major quarterfinal to his credit. Whereas a Roger Federer loss in the fourth round of a major only magnifies his streaks of 23 consecutive major semifinals and 36 straight major quarterfinals, Kohlschreiber’s gallant effort against Murray only magnifies his inability to do more in a “what-might-have-been” career.

4 – THE IMPORTANCE OF BEING ERNESTS

The Latvian used to be in a very different place on tour, a place called “rock bottom,” and not for a brief period of time, either. A quarterfinalist at Roland Garros in 2008 before the age of 20, Gulbis seemed to have a world of tennis riches in front of him, waiting to be claimed. Instead, the prodigal son of men’s tennis wandered off the path. It was reasonable to wonder if he’d ever matter again on tour.

Within the past year, at age 25, Gulbis has indeed rededicated himself to the sport, giving himself a legitimate shot at turning ability into self-actualization. Sunday’s win over Roger Federer is by far the biggest and boldest statement Gulbis has made throughout this process of both reinvention and renewal. If he’s willing to stick around and play mentally contained tennis as he did against Federer, Gulbis can regularly make quarterfinals at majors, and if the draw falls apart in his quarter, he might be able to make an occasional semifinal… that’s if, of course, he maintains focus.

Is that likely? We’re not yet at that point. Is it possible? The theater of sports has given us many more improbable occurrences.

The Swiss lives the most charmed life in world sport. Really — is there a life in present-day athletic competition which has been more of a complete success, on and off the court? A wife who has enabled him to focus on his career; two sets of twins; loads of commercial endorsements extending from an expansive global brand; a charitable foundation in South Africa that has not peetered out the way so many athletes’ flimsy foundations often do. Federer can write his ticket when his days as a main-tour pro ultimately end, but that day is not particularly close to arriving. The dark clouds of 2013 have given way to a solid 2014 season. There’s not much of anything to lament in his life. He’s had it really good for a very long time.

Yet, with all of that having been said, Sunday’s loss to Ernests Gulbis in the round of 16 is exactly the kind of loss that will get under a champion’s skin. Federer fell apart after losing a set point he easily could have won. One shot away from taking a two-set lead and very likely gaining a stranglehold on the match, Federer instead lost focus, and that’s the kind of event which has become slightly more commonplace in his early 30s, with his mind-body dualism not at the level he maintained in his prime, which lasted essentially through the 2010 Roland Garros tournament.

This loss to Gulbis does not mark some sort of crisis. What it does affirm, however, is that relentless high-level consistency is harder for Federer to attain these days. Not “impossible,” mind you; Federer should not be written off with the “I-word.” However, the climb to the top of men’s tennis is going to remain difficult for Federer. Wimbledon will offer him his best chance at an 18th major title, so perhaps this loss will make him fresh for that particular endeavor in a few weeks. 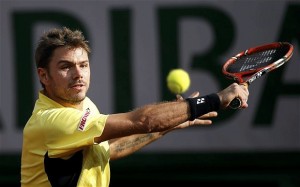 It was a bad week for Switzerland at Roland Garros, but before Roger Federer bowed out of the event on Sunday, Stan Wawrinka took a very early trip home the previous Monday. He’s unlikely to do well at Wimbledon, so he’ll need to produce a big summer hardcourt season to sustain the momentum created by his Australian Open title.

The majors provide powerful intersections of hope and disappointment. Stan Wawrinka was widely if not unanimously seen as the third choice in Paris behind Rafael Nadal and Novak Djokovic. However, his meek first-round loss, documented here at Attacking The Net when it happened, made it plain that in men’s tennis, there’s no Big Four, only a Big Two.

In every upset loss, the focus on the defeated heavyweight is accompanied by the story of the emergent victory. Garcia-Lopez has fashioned the feel-good story that makes the first weeks of major tournaments special.

Tennis players can labor in the vineyard for many years and not reach an important milestone. For many a journeyman in the sport, a fundamental threshold of achievement is the ability to make the second week of a major, otherwise known as the fourth round (the round of 16). Garcia-Lopez is no spring chicken. The Spaniard is 30 years old, but with his upset of Wawrinka and then a third-round win over Donald Young — one that looked anything but certain early in the fifth set — he has made the second week of a major for the first time. Like countryman David Ferrer — albeit on a much smaller scale — Garcia-Lopez has once again shown that in some cases, a tennis player’s best can emerge in the autumn, not the springtime, of a career.

Novak Djokovic is steaming toward the final at Roland Garros. It would be a major shock if he didn’t find himself on Court Philippe Chatrier next Sunday (9:10 a.m. Eastern time in Paris on NBC). Rafael Nadal should join him, but there are concerns about his back and how well it will hold up through the second week. If Nadal can manage his body, he’ll likely be on the other side of the court opposite Djokovic. That’s the only true concern left on the men’s side at Roland Garros.