It did not take long for the 2014 Wimbledon tournament to provide a stormy, polarizing moment.

After only two hours of play, Sloane Stephens — owner of six consecutive round-of-16 or better showings at the majors, the longest active streak in women’s tennis — crashed out of the All-England Club with a 6-2, 7-6 (6) loss to Maria Kirilenko. Stephens’s penchant for playing well at the majors and not so well at lower-tier tournaments finally gave way to a certain kind of consistency… just not the type Stephens was looking for.

Naturally, the loss hurts Stephens in terms of rankings points. Stephens was defending quarterfinalist points from 2013, when she lost to eventual champion Marion Bartoli in the round of eight. A quick exit from a major is never a desirable thing. Yet, one can’t shake the sense that a regression to the mean at the majors could give her a measure of perspective which has been lacking to this point in time.

What’s just as important, if not more so, is this: Stephens’s loss might give tennis fans and chroniclers a needed dose of perspective as well. That’s the true story to talk about on day one of The Championships, as they’re called in England.

Our — and by “our,” I mean Americans’ — views of Stephens have been colored by a number of on- and off-court developements in her young career. Yes, tennis fans across the globe have also been struck by the teasing, twisting nature of Stephens’s journey, but assessments of her tennis and her mindset are more strongly felt in her own country.

Stephens’s victory over Serena Williams in the 2013 Australian Open quarterfinals certainly raised the bar in terms of expectations. The fact that she then made the Wimbledon quarterfinals served to show that the Australian Open run was not a complete aberration. When a player — even one who was just a few months past her 20th birthday as Stephens was in the summer of 2013 — backs up one deep run at a major with another (especially on a different surface), it’s quite understandable to think that immense riches are just a matter of time. It’s worth noting that Stephens, by making the quarters at two majors and not just one, did something that a couple of other American hype magnets, Alexandra Stephenson (1999 Wimbledon) and Melanie Oudin (2009 U.S. Open), failed to do. If the hype meter rose higher for Stephens, it’s easy to see why, particularly in an American context.

The media-industrial complex here in the United States likes to create hype as early as possible. “Media blitzes” and the desire to build “name recognition” might create that short-term endorsement deal, but if done before a player has entrenched herself on tour (as was the case with Oudin following her U.S. Open quarterfinal), the net effect is even more disappointing, and even a little irritating.

It’s not just on the court where Stephens began to create expectations which — on days like today — aren’t remotely met. Off the court, Stephens has displayed a lot of swagger and carelessness, always a volatile mix… and generally not a recommended one for a young player still learning how to carry herself as a professional. A poorly-chosen remark about Serena Williams is just one of several small but telling ways in which Stephens’s attitude is not (and has not been) appropriate for a player of her stature.

It is precisely because of Stephens’s off-court attitude that her on-court inconsistency has become that much more conspicuous. That she attacked an American who is also the best tennis player of her generation didn’t help her cause as a personality in the United States. To an extent rarely if ever matched by any other active player on the WTA Tour, especially in America, Stephens is hit by that most damaging tag, the “D-word:”

If you had a dime for every time an American tennis fan unsheathes the D-word during a Stephens match, you might not have been able to retire in comfort by now, but you would certainly have been able to cover the remainder of your mortgage.

Yes, Sloane Stephens has a lot of growing up to do. There’s good reason to say so, though: She’s only 21. This forms the basis for a larger explanation of the “D-word,” and why it’s a term that’s best reserved for:

B) more glaring examples of players who are not using their talents well.

Saying that a player is “disinterested” carries a certain and substantial kind of weight. If a player is really “disinterested,” the desire to win must not exist. Yet, how or why did Stephens make the round of 16 at six straight majors before Monday’s flameout? She wanted to win then. Clearly, the “D-word” refers to her weekly life on the tour. Narrowly, there’s undeniably some truth to that, and it does no harm to acknowledge as much. However, the persistence with which this weighted word clings to Stephens feels disproportionate relative to other players on both tours.

A number of older and more accomplished players in tennis — think of Svetlana Kuznetsova for the women and Jo-Wilfried Tsonga for the men — are accepted among many as either “headcases” or, in Tsonga’s case, “French,” which is a code word for “predictably erratic and eccentric.” The question arises, though: Why don’t Kuznetsova, Tsonga, and several other players get slapped with the “disinterested” label? Stephens seems to be the No. 1 seed in all of tennis as far as the “D-word” is concerned.

It’s hard to shake what has been said above: Stephens’s combination of major-tournament results and combative off-court remarks have fed into a toxic combination of immense expectations and negative perceptions. It is understandable to see why Stephens has become a lightning-rod figure among tennis fans, even at her young age.

However, this bit of understanding doesn’t make the descriptions of her any more correct or valid. 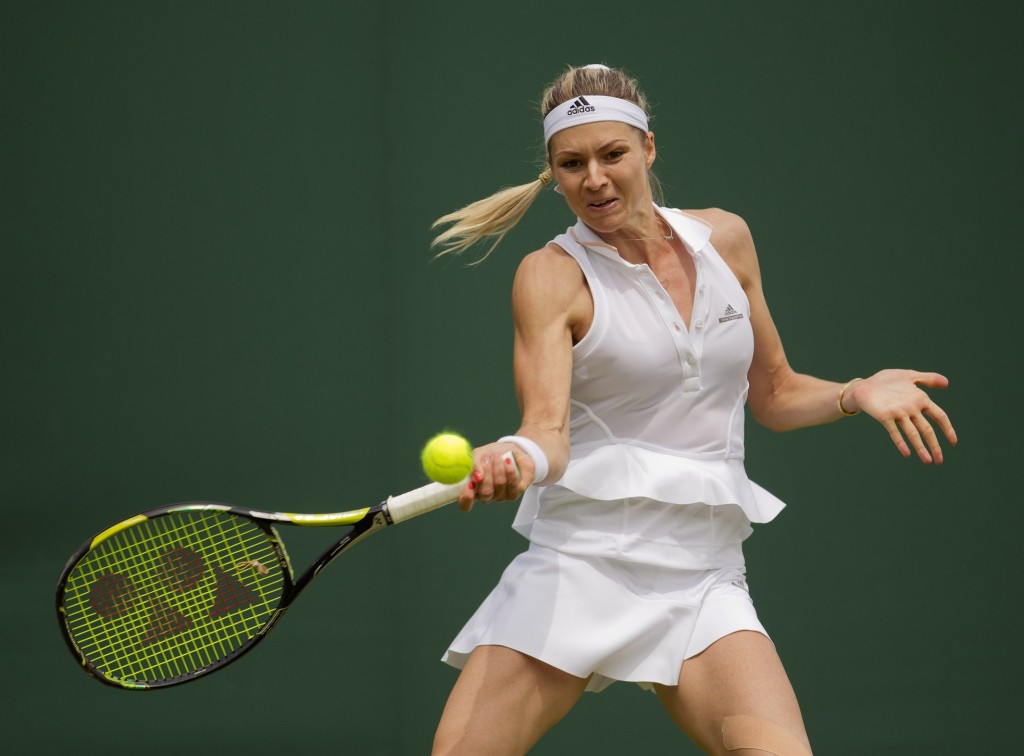 Maria Kirilenko — once an established top-15 player and now out of the top 100 only because of injuries — is no tomato can. If Sloane Stephens had lost to an unknown qualifier or someone with fewer chops as a tennis professional, maybe the “D-word” could be merited. As it is, the furor surrounding Stephens seems to be a bit too much these days. Today’s loss might provide perspective not only for Stephens, but for American tennis fans as well.

Let’s say this about the player Stephens lost to on Monday: Maria Kirilenko has made the quarterfinals at three of the four majors. She has not enjoyed a spectacular career, but she has pieced together a respectable one. Moreover, Kirilenko’s run of success has occurred recently, and not six or seven years ago. There are appalling losses in tennis; this does not seem to be one of them, given the opponent. Moreover, if Stephens had simply hit an open-court forehand or a drop shot at 6-4 in the second-set tiebreaker instead of poorly choosing to go crosscourt, she might be in the second round now. At any rate, her loss was more a product of shot selection than will or attitude.

Why should the notion of being “disinterested” not stick with a particularly young player? Several good reasons exist, the foremost one being that tennis is, above all else, a mental sport.

The roadsides of tennis history are littered with beautiful ballstrikers who couldn’t unclutter their minds. Nerves and temperament have sabotaged many a career. The outward appearance might be one of disinterest, but the inner turmoil of the mind as it tries to get out of the way and let the body flow freely is what’s really in evidence.

Nerves and inadequate mindsets do many things to tennis players: For some, nerves limit freedom of movement — they make a player slower and less responsive. For others, nerves bring about tight hitting: shanks, loopy groundstrokes, a lot of short balls. For others, nerves are manifested in the form of wildness: errors sprayed multiple feet beyond baselines or well into the doubles alleys.

Disinterest? That’s what Ernests Gulbis displays when he decides he doesn’t want to play a match anymore. It’s what Fabio Fognini has revealed many times in his career, despite a level of talent that — if ever harnessed — could have created far greater riches. Those players are both north of their 25th birthdays, though. For Stephens, the road on tour is still in its relatively early stages. Men’s players such as Milos Raonic and Grigor Dimitrov are both 23, and they’re only just beginning to figure out life on the ATP Tour. Affixing the “D-word” to Stephens at 21 years and three months?

It’s premature, to say the least.

Allowing a few years to pass before a young professional becomes a not-as-young professional would seem to be the wisest course of action when assessing that player’s true feelings — or lack thereof — for her sport.

Maybe, as a postscript of sorts, the grass-court title won this past week by 19-year-old Madison Keys, a prize claimed with such eagerness and hunger, magnifies the extent to which Stephens doesn’t compete in the same way. Moreover, Stephens’s comments after her loss to Kirilenko will surely affirm the belief among many that she’s a wayward, rudderless tennis soul. Fair enough on that score. If one says that Stephens has a lot of growing up to do, no one in the arena — fans, journalists, opinion-givers, or Stephens’s coach, Paul Annacone — would dare disagree.

Yet, this is about more than merely coming to an obvious point of agreement about the need for Stephens to mature. It’s a matter of something slightly more nuanced.

Anyone who consumes written sports content might be struck by the ways in which commentators and critics (this one included) will criticize in one moment and then say, “don’t be too hard on this player or team” in a separate instance. Readers might wonder if there’s any rhyme or reason to such lines of argument. Why does Commentator X unleash the cannons of criticism on Monday but go soft and defensive of a different player on Tuesday?

Well, here’s one answer (speaking only for myself, of course): If an athlete is young, that athlete must be given space and time in which to grow. Everyone can draw lines at different points on the spectrum, but the general principle should be respected and kept in plain sight.

The following statement might be an overgeneralization, but it serves a purpose from where I sit: If a player commits loads of casual errors at age 28, it’s much more likely to be actual disinterest than if a 21-year-old player does the same. Much more will be written about Sloane Stephens’s career, but for now, it is much wiser to take a wait-and-see approach to her career than to speak with an air of omniscience and claim that she just doesn’t care about tennis.

After all, this sport is very good at making a lot of talented players look like they don’t care on the court, a point that is easy to lose track of amidst the familiar American whirwind of hype and expectations.