The U.S. Open’s trophy presentation ceremonies are usually the tackiest in tennis, even worse than the Australian Open’s prolonged affairs. The U.S. Open ceremony becomes something of a game show, with the CBS emcee rattling off the prizes and money totals for the champion and runner-up.

This time, though, the U.S. Open ended with an upset — no, not Caroline Wozniacki defeating Serena Williams in Sunday afternoon’s women’s singles final at Arthur Ashe Stadium. That didn’t happen.

The big shock on the next to last day of the final major of the year? The U.S. Open trophy ceremony was actually great… and poignant… and even unforgettable.

CBS’s last women’s singles final broadcast turned into a memorable one solely for the scene created just before Serena was handed the trophy marking her sixth U.S. Open championship and her 18th major title. With her 6-3, 6-3 thrashing of Wozniacki, Serena tied two people you might be vaguely aware of on the all-time major singles title list. Those fellow legends of the sport came down to the court to congratulate the 21st century’s greatest female tennis player:

Nice touch to have Navratilova & Evert there. #18 pic.twitter.com/RuGREg2CdK

It’s fitting that Serena should share the stage with Martina Navratilova and Chris Evert. Much as those two greats remained at the center of the story of tennis for nearly two full decades, Serena has done the same. More to the point, one doesn’t have to engage in a women’s tennis “GOAT” (Greatest Of All Time) debate to realize that while there are arguments to be made for the superiority of each of those three players — Serena, Martina and Chris — Serena has registered a very significant achievement with this 18th crown, an achievement which goes beyond the number 18 itself.

Steffi Graf, the other women’s tennis player to win at least 18 majors entirely within the Open era, won 22 titles. Her first came in 1987, her last in 1999.

You can do the basic math there. A gap of 12 years separated those three players’ first and last major championships.

For Serena Jameka Williams, whose first major came at the U.S. Open back in 1999, this U.S. Open gives her a major title 15 years removed from her maiden triumph at one of the sport’s four biggest events. Serena doesn’t just own mere longevity; she owns quality longevity, more than any other female player who has played exclusively in the Open era except for Navratilova, who made the 1994 Wimbledon final at the age of 37.

It’s a great paradox, is it not? This was a year in which Serena’s presence at the center of the story of tennis lost some of its traction. Serena failed to make even the quarterfinals at the year’s first three majors, and she didn’t even make the second week at two of them. Losses to Ana Ivanovic at the Australian Open, Garbine Muguruza at Roland Garros, and to Alize Cornet at Wimbledon led plenty of tennis bloggers (including this one) to say that Serena no longer deserved the automatic benefit of the doubt at this U.S. Open.

True, Serena received a fantastic draw, one with the “never-comfortable-at-the-majors-anymore” Ivanovic in her quarter, and the “never-comfortable-in-New-York” Petra Kvitova in her half. Yet, Serena lost to players she figured to beat at 2014’s previous showcase events. Was she going to straighten out her game after a spring and early summer that owned the marks of mental fatigue more than anything else?

Just when she began to be doubted at a level that hadn’t existed in her career since an injury-derailed 2011, Serena once again stepped forth to outclass the rest of women’s tennis.

While Simona Halep learns to deal with pressure and Eugenie Bouchard tries to to the same; while Maria Sharapova remains a present-day clay-court specialist and Kvitova rises only on the lawns of Wimbledon; while Victoria Azarenka tries to regain a complete base of fitness; while veterans such as Lucie Safarova, Ekaterina Makarova, Peng Shuai, and Andrea Petkovic try to take the next step beyond a first-ever major semifinal (all of them achieved the feat in 2014); and while an injured Li Na contemplates the next step in her tennis future, Serena Williams remains at the center of the story of women’s tennis.

This constancy, this ability to emerge again and again and again… and again… after various dark nights of the tennis soul, is in many ways Serena’s foremost claim to greatness at the highest level and on the largest scale imaginable. 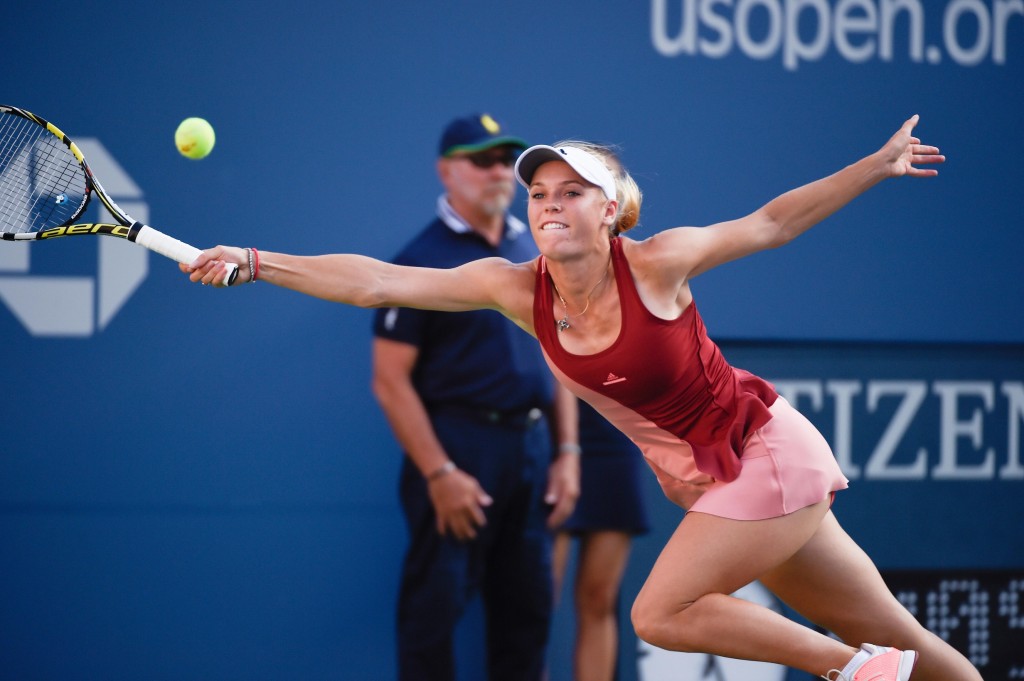 Caroline Wozniacki reached higher and lasted longer than in any other major she’s contested, with the sole exception of the 2009 U.S. Open, when she also lost in the final. Wozniacki started her match against Serena Williams in shaky fashion, but with the score at 3-2 in the first set, Serena took the match away from her with a strong performance.

Wozniacki achieved her own rebirth after a few years of relative misery on the WTA Tour. This tournament didn’t bring the Danish star a championship, but it brought her a great deal of affirmation, vindication, and various other iterations of “-ations” that should enable her to once again become a steady title contender on tour. Yet, for all that Wozniacki achieved, it’s Serena’s 18th major and sixth Open — a decade and a half after that surprising first crown in 1999 — which comprise the feat that will echo through the pages of the sport’s history.

It’s amazing how one major tournament does so much to change the tenor and trajectory of the global tennis conversation. After Wimbledon, the conversation basically boiled down to, “Can Serena Williams salvage what will be a subpar year by her standards?” The question might not have been wrong or inappropriate, but it admittedly took a 17-time major champion’s career and reduced it to very narrow terms and parameters in the present tense.

Now, after winning the U.S. Open, Serena has — like Don Draper of Mad Men in the Lucky Strike ad campaign — managed to change that conversation.

It’s a conversation which now asks, “Just how great is Serena Jameka Williams, measured against Steffi Graf and the two legends who joined the new 18-time major champion at Arthur Ashe Stadium on an unforgettable Sunday evening?”