On Monday, it was Stan Wawrinka.

On Tuesday, it was Li Na.

On Wednesday afternoon in Paris, the biggest shocker of an already-wild Roland Garros reverberated across the tennis world. Garbine Muguruza, hitting with depth and consistency while finding an above-average T-serve, dismissed defending champion Serena Williams in little over an hour. The 6-2, 6-2 scoreline is what everyone expected from the match… just not with the huge underdog advancing to the third round.

The reality is a discordant one: Instead of a Williams Sister showdown in the round of 32, Muguruza will play Anna Schmiedlova, who steadied her game and delivered a number of clutch passing shots late in the third set to fend off Venus Williams. Tennis fans might not be thrilled by this outcome; there’s no doubt that stars lend more visibility to the sport and drive a substantial measure of interest. However, when major tournaments send high seeds out the door in the first week — as was the case at Wimbledon last year — tennis comes up against the problem golf has whenever one of its major tournaments loses Tiger Woods… as will be the case at the upcoming U.S. Open in June.

It’s one of the core issues tennis and tennis broadcasting must address over time: The stars do bring a measure of ratings, yes, and they have earned the attention they deserve, not to mention better court assignments and a bit of preferential treatment in terms of when they start tournaments (especially if they ask for a favor now and then), but the health of a sport ultimately rests on the sport more than anything else. This concept is never tested — or given a fresh injection of urgency — more than when stars tumble early at a major tournament. 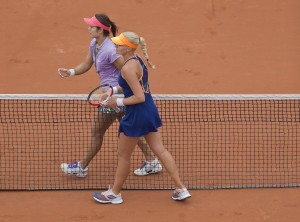 Li Na — who lost in much the same way that Stan Wawrinka did the day before — has left her section of the draw wide open, creating many off-the-radar matchups that force tennis the sport to shine more than its stars. Can American broadcasters market the sport itself and, in the process, connect with viewers?

At Wimbledon last year, Rafael Nadal and Roger Federer were gone three days into the event. At Roland Garros this year, two global icons — Serena and Li Na (Li being an icon in China, which is a big chunk of the world) — are out of Paris four days into the event. Wawrinka is the reigning Australian Open champion, a player who had made himself a central figure on the tennis scene. Not all sections of every draw have been busted up, of course. There’s Maria Sharapova and Ana Ivanovic on the women’s side; Rafael Nadal and Novak Djokovic are alive and well on the men’s side. In the quarterfinals and beyond, you’re still likely to see a number of star-focused matchups, but in the next three to four days, you’re going to get a lot of third- and fourth-round matchups that make you go, “WHO?”

This is where tennis — referring to the sport itself, but also its major-tournament broadcasters — needs to be more vigilant.

What happens when Tiger Woods retires?

What happens when Serena and Federer do the same?

What happens in eight to 10 years, when the Nadal-Djokovic-Murray trio hits the mid-30s and likely moves from the scene?

Women’s tennis — following the retirements of Martina Hingis, Justine Henin, Dinara Safina, and Kim Clijsters, all accompanied by the aging of Venus Williams and the inability of multiple players to live up to their immense talents (Ivanovic and Svetlana Kuznetsova head this list) — lost the quality depth it possessed for quite some time, when it easily overshadowed a very weak ATP Tour. Women’s tennis offered the best of the sport in most of the 1990s and in the first half-decade of the 2000s.

The men, on the other hand, put the likes of Martin Verkerk and Tomas Enqvist and Rainer Schuttler and Arnaud Clement in major-tournament finals during that period. Yes, Pete Sampras and Andre Agassi remained contenders through that period, with Agassi enjoying yet one more career renaissance (he experienced many of them) in the years after Sampras retired in 2002. Yet, the point remained that a lot of major-tournament matches were occupied by relative nobodies. In eight to 10 years, the ATP will likely experience this kind of anonymity among its players once more. The sport will have to carry the workload in terms of selling tickets and gaining attention.

This is the risk, therefore, of using a star-heavy broadcasting approach at the majors. When the stars fall, are people still interested in the sport itself, in the theater of major-tournament competition?

Every sport has its superstars, but — I’m speaking to a primarily American audience here — NFL football has undeniably risen in the estimation of viewers over the past three decades or so, while baseball has tumbled. “Sports matter more than stars” is not a fringe notion. There is frequently something about a sport that resonates with the public. Baseball fit the American temperament before television and before the advent of cable and its proliferation of viewing options. Football, by owning the weekends but also due to its identity as a sprawling spectacle, has become the sport made for a more fragmented society in search of reasons to use HD televisions; release tensions; and bet money on all sorts of propositions.

Every broadcast or cable network has the capability to sell the essence of a sport to the public. Golf can sell itself with a course like Pebble Beach or Augusta National. Tennis offers some gorgeous places to play tennis, too, but a tennis court itself can only be dressed up so much. (Yet, if ESPN invested in the Monte Carlo Masters and packaged in some features about the place, maybe that would draw a small new subset of fans into its homes.) Tennis, more than golf, can’t appeal to aesthetics. The sport’s best quality is that it forces athletes to figure out problems on their own. Dealing with pressure; fending off a hot opponent; turning around a match when it’s not going your way — these are all regular parts of tennis, and when a match at a major turns into a three-hour WTA epic or a four-hour ATP war of attrition, can these players also deal with cramps and impending physical deteriorations?

Tennis is “boxing without the blood,” and just imagine if this sport could connect with the subset of the American population that eagerly buys pay-per-view for a Floyd Mayweather fight late on a Saturday night every now and then. When the legends of this era (men and women) retire, tennis has no guarantee that it will have a star presence as robust as it has enjoyed the past 15 years (the women from 1999 through 2007; the men overlapping a little bit, from 2005 to the present day).

This Roland Garros tournament — already littered with brand-name carnage — serves as a timely reminder to ESPN, which has made such an impressive yet immense investment in tennis: When you don’t have box-office individuals on court, can you sell the fundamental product — the sport — in ways that will pull in (or at least retain) viewers?