Tuesday — not counting the 2:26 a.m. finish from Monday’s order of play between Kei Nishikori and Milos Raonic, written about here by Juan Jose Vallejo for Rolling Stone magazine — was not an exciting day at the U.S. Open.

Three men’s fourth-round matches were decided in straight sets. The fourth match was a drawn-out display of medium-pace hitting between two solid, competent professionals, Marin Cilic and Gilles Simon. Cilic’s persistence and Simon’s tirelessness are admirable tennis virtues. Cilic made his second straight major quarterfinal, taking advantage of the fact that his body is comparatively healthier than a lot of other players on the ATP Tour due to a multi-month suspension which began in the latter half of 2013. Yet, no one would have looked at Cilic-Simon and called it a thrilling, edge-of-your-seat match. It was one of those five-setters which exists due to each player’s limitations, not their ability to push themselves to greater heights.

On the women’s side, Peng Shuai and Caroline Wozniacki both played brilliantly — that word is not hyperbolic — in their respective quarterfinal victories. Peng conceded only three games to 17-year-old Belinda Bencic, and Wozniacki dished out a bagel and breadstick to 27-year-old Sara Errani. Wozniacki, in difficult windy conditions, hit 26 winners against one of the better defensive players in the sport. The excellence of Tuesday’s two quarterfinal winners, however, was not enhanced by a robust challenge from the other side of the net. Tuesday simply lacked sizzle after a Monday that delivered the goods.

This is therefore a time to reflect on tennis, and Tuesday’s events offered plenty of food for thought. No more compelling story emerged from the day’s play than the re-emergence of one of the sport’s most charismatic and endlessly fascinating figures, Gael Monfils, who advanced to the quarterfinals with a 7-5, 7-6 (6), 7-5 win over Grigor Dimitrov in the fourth round. Monfils will play Roger Federer in Thursday night’s men’s quarterfinal at Arthur Ashe Stadium.

ATHLETES AND THE COMMITMENTS THEY MAKE

Among diehard tennis fans, there’s no need to explain who Gael Monfils is or how he goes about his business. For the more casual (American) sports fan who doesn’t follow tennis religiously but pays attention during Wimbledon and this U.S. Open, it’s probable that Monfils might register a little more than a number of other players on tour who exist outside the “Big Four” of Roger Federer, Rafael Nadal, Novak Djokovic, and Andy Murray. Monfils’s court presence and penchant for showmanship have grabbed the eye in ways many other players fail to do.

Monfils is, like Richard Gasquet and Jo-Wilfried Tsonga, a quintessentially French tennis player, in that he’d generally prefer to look good on court and put on a show in the course of winning. Playing a beautiful brand of ball matters to the French. Fun and flair are meant to be core parts of the experience, and Monfils embodies this identity more than anyone else among French players. You’ll get a fairly representative glimpse into the mind of Monfils by reading his press conference following his victory over Dimitrov on Tuesday.

Here’s where discussions of Monfils and other “tennis entertainers” become particularly compelling and, perhaps, contentious among the various kinds of fans and observers that comprise the global tennis audience: Monfils wants to be happy — that’s his focus. He wants to play in a way that gives him joy on the court. Monfils is not someone who lives with regrets or any kind of deep sadness. He doesn’t live in the shadows of what might have been the way other haunted athletes have done after passing through their careers with the weight of underachievement on their backs. Monfils is not a burdened soul, and for that, he merits a certain degree of respect: He’s living his life and his tennis career on his terms. That’s mature.

The problem, of course, is that if Monfils spent his career reining in his theatrical impulses and body-busting inclinations at important junctures in seasons, tournaments and matches, he might be sitting here today as the No. 5 seed against Federer instead of being the No. 20 seed. He might have a few major finals to his credit. He might be the owner of several more Masters 1000 championships.

Just look at his performance against Dimitrov.

This is the Gael Monfils so many tennis fans have wanted to see over the years. For once, Monfils played a very straightforward match. He brought a big serve to the dance, but the oppressively hot and humid conditions seemed to focus his mind in other facets of his game. Monfils generally tried to take the initiative, especially in a strong first set, but when he sensed that Dimitrov was feeling the weight of the occasion in the final three points of the pivotal second-set tiebreaker (which Dimitrov led, 6-4, only to then miss a put-away after a terrible Monfils drop shot), he played defense and dared the No. 7 seed to hit a winner past him.

Monfils briefly lost control of his emotions and his focus at 4-3 in the second set, and in the tiebreaker, he seemed to be on his way to a long and complicated loss. However, that crucial error from Dimitrov on that 6-4 point shifted all the pressure to his shoulders. Dimitrov had the set on his racquet, serving at 6-5 in the tiebreaker, but he spun in a second serve and tamely sent a ball into the net. He then overcooked his groundstrokes on the next two points, and Monfils gained a two-set lead. For once, Monfils prevailed because of his steadiness while his opponent imploded in spectacular and unsettled fashion. That’s a flipping of the script, and it’s instructive to note that Monfils didn’t cram the highlight reel on Tuesday. He instead went about the business of winning a tennis match.

Leaving behind a strong artistic impression is great if you can do it, but winning matches is what matters in a strictly competitive sense, viewed coldly from a distance. This is one of tennis’s greatest tensions, and it was brought forth in this tweet from Ben Rothenberg, the thoughtful tennis reporter for The New York Times:

I'll say it again: if Gael Monfils was a Slam-winning number one, tennis would be at least three times more popular. Rock star. #usopen

The question must be asked (and you’ll note that in the responses to this tweet, one person brought up the very point itself), however: “If Gael Monfils was the No. 1 player in the world, would he be Gael Monfils?”

There’s a very specific — and probably (though not definitely) accurate — implication in that question: Being No. 1 cannot be achieved with Monfils’s temperament. You can’t be devoted to entertaining a crowd and reach the top of your sport. Sure, Magic Johnson and Steve Young (just to name a couple of team-sport athletes) loved to excel while performing with flair and artistry, but their commitment to winning came first. The excellence was the goal, and making sweet music within the excellence represented the bigger picture. Putting on a show wasn’t the primary point of emphasis, but the secondary one.

For Monfils and other tennis players with a showman’s (or show-woman’s) heart, the entertainment value is the primary thing. This is why it’s legitimate to wonder if Gael Monfils would be all that he is — charismatic as a personality and captivating as an athlete — if he was the world No. 1, sitting atop the sport the way Djokovic is… and the way Nadal and Federer have done in the recent past.

Tennis fans know this. The general public? Perhaps to some extent — probably among more sophisticated sports fans — but not as much as the tennis community itself. It’s necessary to allow Monfils to live his life on his terms, but purely in terms of assessing why the 28-year-old has made only two major quarterfinals outside of the French Open, it’s not particularly controversial to say that his attitude toward tennis is very much a part of the explanation for why his career has not come close to reaching the ceiling of its potential.

This very tension about the soul of tennis, though, enables Monfils’ surprisingly mature performance on Tuesday to lead into a brief discussion of his opponent and the future of ATP tennis. 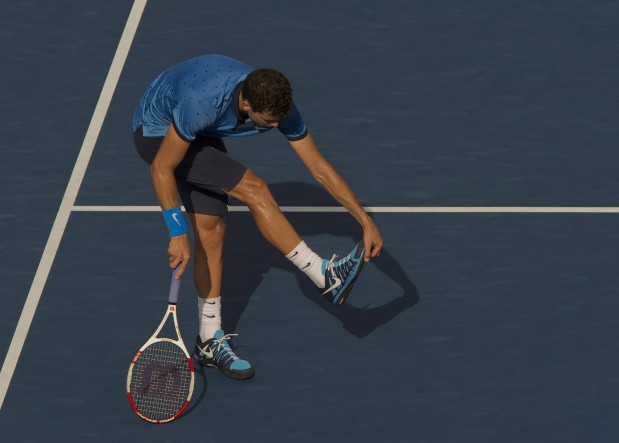 Grigor Dimitrov had to replace his shoes on Tuesday, just one sign of how worn-down the Bulgarian felt as his match wore on against Gael Monfils. Dimitrov, like Milos Raonic, enjoyed a step-forward season at the majors in 2014, but in 2015, both men will be expected to do much more.

Monfils, as mentioned above, is 28. Marin Cilic, referenced at the beginning of this piece, turns 26 in a few weeks. The only men’s quarterfinalist who won’t be at least 26 at the beginning of October is Kei Nishikori, who is 24. Dimitrov, along with Milos Raonic, was hoping to lend a younger face to the final eight on the ATP side in New York, but his failure against Monfils shows how far he and Raonic both have to travel in order to become elites in the sport.

Monfils’s career might still offer a crowning moment. If he can max out against Federer on Thursday and knock out the five-time U.S. Open champion, everything would seem possible for him, especially since he pushed Novak Djokovic deep into a third set in the Canada Masters 1000 stop in Toronto a month ago. However, in a larger context, Monfils’s career is mostly behind him. For Dimitrov and also Raonic, most of the road still lies ahead.

However, the journey is well past its beginning point, too.

Dimitrov is 23. When he turned that age, Rafael Nadal had already won six majors, three-fourths of the career Grand Slam, and majors on three different surfaces. By the time of his 23rd birthday, Roger Federer had won three majors and had basically figured out the puzzle of his own mind and tennis game. When Djokovic turned 23, he was just a few short months away from beating Federer in the 2010 U.S. Open semifinals and beginning the ascendant period of his career, which is still very much in evidence today.

Monfils might steal one, maybe even two, majors (though the odds say he won’t). Dimitrov and the other members of his 22-to-25 age cohort still have time to attain greatness. When one talks about the things Dimitrov and his similarly-ranked contemporaries need to do to take the proverbial next step, none of the items on the shopping list involve becoming a more theatrical or entertaining player.

Dimitrov’s mental game collapsed late in the second set against Monfils, and he blew a 4-0 third-set lead against David Goffin in Sunday’s third round before being gifted a break with two consecutive double faults by Goffin at deuce and 4-4. He also had a real chance to take Novak Djokovic to five sets in the Wimbledon semifinals, but he couldn’t raise his game in a number of important moments. Yes, 2014 did in many ways bring Dimitrov (and Raonic) in touch with spotlight situations and the searing scrutiny which accompanies them, so one can understand if those moments weren’t handled properly. In 2015, though, the members of the younger generation in men’s tennis have to show that they can stand in the arena and not crumble in the face of the men who have carried the ATP Tour for so long.

Will it be fascinating to watch? Surely.

Will it be entertaining to watch? Gael Monfils sure hopes so… but for the player he defeated on Tuesday at the U.S. Open, that’s beside the point. Therein lies the constant tension that never leaves the room when “the soul of tennis” is discussed.