Sometimes, it’s hard to tell whether the women or the men are carrying the run of play at a major tennis tournament.

Not this time. Not in New York. Not at the 2014 United States Open. The women have ruled the Big Apple in the first of the two weeks at the Billie Jean King USTA National Tennis Center. Andy Murray and Robin Haase might have provided drama, but it was drama richly laced with “theater of the absurd” plot twists, not crunch-time tennis played admirably and well. The women have engaged in weird and brain-bending matches of their own, but after Venus Williams and Sara Errani traded bagel sets and worked their way through a break-strewn final set, they closed their third-round match tiebreaker on Friday afternoon with three straight glorious points, the final two captured with amazing dexterity and aplomb by Errani.

At 5-5 in the breaker, Errani somehow got the edge of her racquet on a well-struck inside-out forehand pass from Venus, bunting it just over the net so that the older Williams sister couldn’t make a reply. On match point at 6-5, Errani — from a noticeably defensive position — hit a lunging down-the-line backhand pass which forced Williams to retrieve the ball without pace into the middle of the court. Venus was in no-woman’s land, and Errani — suddenly in command of the point — was able to whip a crosscourt forehand into the deuce corner while her opponent tried to establish position in the middle third of the court. The match was hardly a classic, but the finish definitely was.

In many ways, the Venus-Errani match summed up the week for the women at the U.S. Open — even when matches have plodded along or endured not-so-great moments, the entertainment value has still remained considerable… much more so than the men, whose tournament seems to be waiting to begin in a very real sense. More depth, more surprises, more stories — they’re all coming from the women’s side of the divide, and just in time for a blockbuster this afternoon.

THE PIECES OF THE PUZZLE: THE WTA’S DELICIOUS DRAMAS AND SHIFTING SCENES 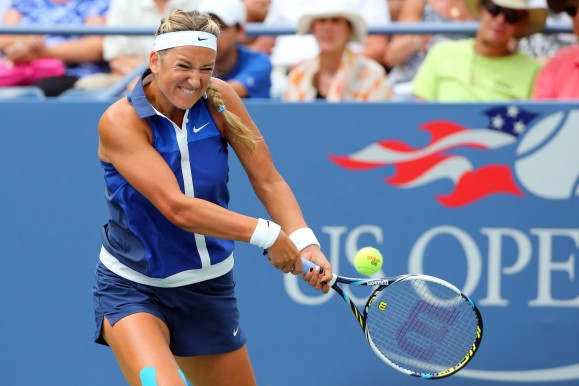 Petra Kvitova and Victoria Azarenka were bracketed to meet in the fourth round. Azarenka, for all of her recent injuries, has managed to survive the first week. Kvitova, on the other hand, couldn’t… 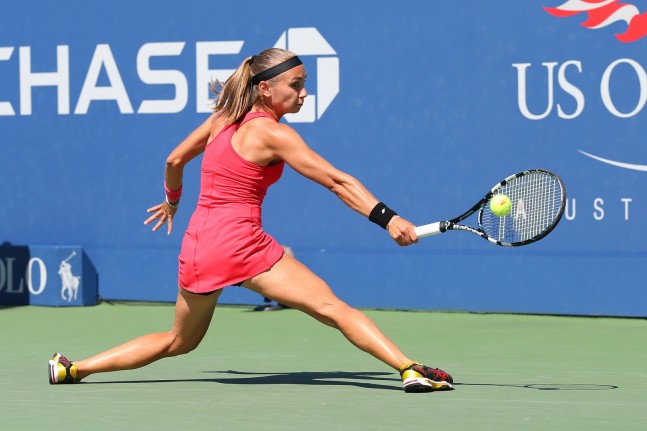 … because her opponent on Saturday, Aleksandra Krunic, was consistently able to retrieve shots slightly behind her body, as shown here. Krunic’s artful assortment of defensive shots and change-of-pace offerings flustered Kvitova to no end. Krunic and Mirjana Lucic-Baroni both making the round of 16 as qualifiers — taking out top-three seeds along the way — has added so much zest and intrigue to the WTA portion of the U.S. Open this year.

The story of the women’s tournament at the U.S. Open, after one week, is a story of paths followed and paths that have diverged.

Kaia Kanepi, long known as a player who has trouble closing down big matches, made her way through to the fourth round, helped by a win over Sam Stosur, another player with a history of crunch-time setbacks. Kanepi is walking the path Stosur had hoped to travel.

This dynamic continues to exist in other places: Aleksandra Krunic, pictured above, short-circuited a big-hitting opponent, third-seeded Petra Kvitova, with her defense and an ability to hit shots with varying levels of pace and trajectory. This is part of the Simona Halep playbook, but Halep stood out on Friday precisely because of her inability to execute that kind of plan against Mirjana Lucic-Baroni, who mowed down the second seed with an avalanche of forcefully struck winners. Krunic is 21 and wide-eyed with wonder. Lucic-Baroni is 32 and the owner of a tortured, sad, tear-strewn, trauma-laden personal history, one that has robbed her of a promising tennis career. The two stand on opposite sides of the tracks in so many ways, and their games represent two very different flavors of tennis as well. Yet, they’re both qualifiers who have made the fourth round while upsetting top-three seeds. The intersections (and divergences) enveloping these two players only add to the richness of the stories the WTA has been creating in the big city.

While several WTA players have moved in opposite directions at the Open, a few are following the same trajectory, making it impossible to deny the similarities between them, despite the many differences which persist.

Eugenie Bouchard is not as fluid a ballstriker as Maria Sharapova was at age 20. In terms of same-age comparisons, they don’t quite match. However, present-day Sharapova and present-day Bouchard certainly offer reasons to link them together… and not for the off-court stuff, either. Both women are not playing their best. One would not call their tennis comfortable and fluid at the moment. Yet, with forceful shouts of self-encouragement and a tenacity they certainly share, the young Canadian and the Americanized Russian have both fought their way into the fourth round, with Sharapova’s next encounter being today’s blockbuster — the winner could be seen as the favorite to make the final from the bottom half of the draw — against a revitalized Caroline Wozniacki. Another player known for her fighting spirit, Victoria Azarenka, has also joined Bouchard and Sharapova in the round of 16, lending star power to a field that has been depleted in other places.

Sharapova-Wozniacki is a main-event throwdown that will command the attention of the tennis world. Yet, the beauty of the first week of WTA competition at this year’s U.S. Open lies in the diversity of stories that have been produced, many of them from obscure places in the draw and, at times, once-forgotten faces such as Lucic-Baroni, whose resurrection produced this deeply moving moment on Friday.

A) hadn’t been mentioned in this piece until now;

B) has not been knocked out in the first week of a major.

Serena has simultaneously managed to remind tennis fans of her quality and yet, with her comparative quietude in week one, show that the WTA can become the main attraction in New York without her having to be on center stage all the time. That, in many ways, underscores why the women have carried the day… and the week… at the 2014 U.S. Open. We’ll see what the second week can do to build on — or at least sustain — this past week of compelling tennis.