There’s a very clear theme to be found at the 2014 United States Open, now that the draws have been announced in a ceremony held early Thursday afternoon in New York. The women’s draw is here — click on each highlighted section to see the pairings.

“WHO WILL KNOCK OFF THE BIGGEST NAMES (IF ANYONE)?”

As you look at the drawsheet, you’ll find that for all of Serena Williams’ struggles in 2014, and for all of Maria Sharapova’s weaknesses on non-clay surfaces, these players do not face the central burdens of proof in the women’s tournament. In some tournaments, the central test involves the ability of a proven but perhaps struggling champion to reach into the well and rediscover a brilliance that has been missing for far too long. Sometimes, a tournament’s gravitational center exists in the hearts and bones and marrow of the heavyweights.

Without question, Serena has something to prove in this tournament, having not won a major (or even reached so much as a major quarterfinal) this year. Without question, Sharapova wants to show herself and the rest of the WTA that she can deliver the goods on a non-clay surface, proving that she’s not just a one-trick Roland Garros pony at the majors.

Yet, for all the publicity those two players (and the questions surrounding them) will face in the coming days, the WTA side of the U.S. Open is defined and dominated by the uncertainties surrounding the players who have never won a major. Champions face their own internally generated forms of pressure, and on occasion, their legacies can be substantially improved by winning a major title in a specific context at a particular point in time. Sharapova has already done this, however, in 2014, winning Roland Garros for the second time. Petra Kvitova is no longer a one-hit wonder, having claimed Wimbledon with a flawless performance in the final against Eugenie Bouchard.

The weight of this upcoming fortnight in New York falls on the shoulders of the “almost” players — some of them destined for greatness, some of them likely confined to a quarterfinal ceiling at the majors — who are still looking for a transformative experience that can unlock a decisive extra measure of confidence, thereby setting loose the full measure of their talents. What’s fascinating and delicious about this dynamic is that it is not confined to players based on their seedings in the draw.

Simona Halep is likely to lift multiple major-tournament trophies and collect a great many accolades by the time she hangs up her racquet. Already a major finalist at Roland Garros, Halep’s ability to redirect the ball, often by taking it early, sets her apart from most players on the WTA Tour. Point construction and court sense (and Li Na’s injury) have elevated Halep to the No. 2 seed in this tournament. On one level, she’s a main contender.

Yet, she faces more pressure in this tournament than Sharapova, who is seeded fifth. 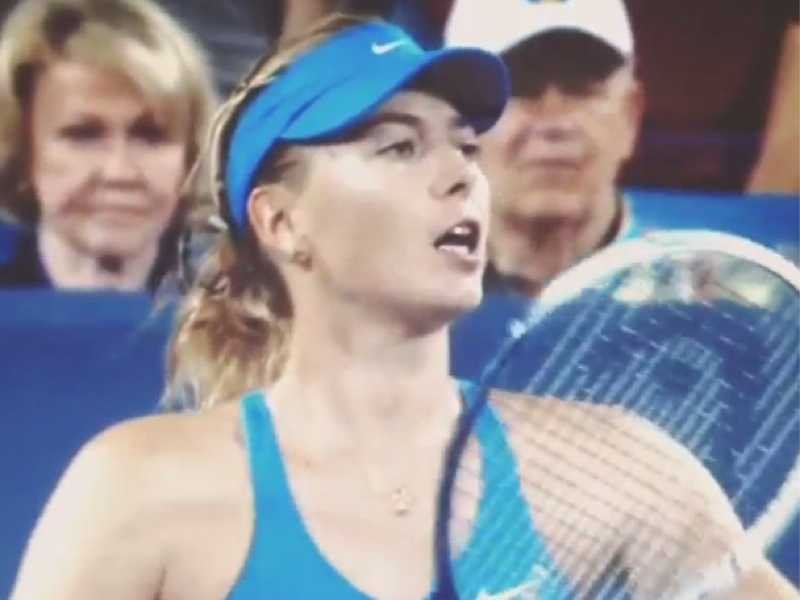 Simona Halep’s blood pressure needs to remain stable if she faces Maria Sharapova in a possible blockbuster quarterfinal. Sharapova and Halep are the “compelling match magnets” on the WTA Tour right now. Sharapova, though, has beaten Halep on Madrid’s dirt, Parisian clay, and Cincinnati cement. It’s Halep who has more to prove in that match… if both players get that far in the tournament.

In the postmodern “Magic Box” of Madrid; the elegant setting of Paris; and the distinctly different environs of the suburban American Midwest, Shrapova has beaten Halep in three sets this year. Sharapova doesn’t match up well against Serena, and she steadily lost ground to Victoria Azarenka when the Belarusian was healthy, but Halep is part of a long list of players who regularly succumb to Sharapova in extended three-set combat.

A lot of observers thought Halep was ready to score a victory against Sharapova on the fast hardcourts of Cincinnati a week ago, but Sharapova overcame a boatload of errors by defending better from the corners of the court and hitting harder when given a chance to do so. Halep played conservatively and with more topspin; Sharapova, who loves to play defense, was wise enough to play more aggressively and talented enough to execute the adjustment with great success. If these two meet in the quarterfinals — they might face formidable obstacles to get there — the match would essentially be a toss-up. On hardcourts, though, that’s a compliment to Sharapova and a bit of a disappointment for Halep. The second seed, not the fifth, is the one who has to convince tennis fans that she can prevail in a main-stage showdown.

Halep might have to face Venus Williams in the fourth round, and Sharapova is bracketed to face (if seeds hold up) a resurgent Caroline Wozniacki in the fourth round. CBS Sports executives want both of those matchups to occur. If Halep and Sharapova survive the fourth round, all eyes will turn to Halep as the player in need of a statement-making result if she wants her career to move forward. Halep has achieved at a very high level this year; solving Sharapova and making the final in New York would lend a level of completeness to her 2014 season.

As for Serena, in the opposite side of the draw from both Halep and Sharapova, the particulars of the draw offer a plot twist of sorts. It’s true that Serena has lost before the fourth round in each of the past two majors. Moreover, concerns about her back can never be too far away; her serve is not the automatic, money-in-the-bank point-ender it was in 2013. Yet, for all the worries expressed about Serena and her game over the summer, this draw has given her as good a path as she could have hoped for. Veterans who have consistently fought inner demons over the years — wilting in the crunch-time sequences of high-stakes matches — are the players in Serena’s path: Carla Suarez-Navarro or Samantha Stosur await in the fourth round, and Ana Ivanovic looms in the quarters. Kvitova, not Halep, is the potential (top-four-seed) semifinal opponent in Serena’s half.

This tournament was likely to serve as a verdict on Serena’s ability to regroup after three unfulfilled majors in 2014. To an undeniable extent, it still is. However, the reputations of the players standing in Serena’s way make the U.S. Open more a commentary on the challengers and their strength between the ears; Serena, improbably but genuinely, isn’t going to be doubted with this draw. It’s something few tennis observers expected to write a few weeks (or even days) ago, but it’s where we are.

In the other quarter from the bottom half of the draw (with Sharapova and Halep in the opposite quarter), Agnieszka Radwanska knows she has an opportunity to make a deep run. Radwanska has disappointed this year at the majors, but her championship in Montreal has given her — and pundits — reason to believe that she’s a legitimate top-tier contender at the Billie Jean King USTA National Tennis Center. A month ago, the logical position would have been to doubt Radwanska’s ability to reach the quarters or semis in New York, but that prospect looks fairly likely right now. A generous draw through the first three rounds should mean that as long as Radwanska can defuse the big hitting of 2014 Wimbledon semifinalist Lucie Safarova, she should make the second week and gain a realistic chance of booking a spot in the semis on Friday, Sept. 5. It’s up to the challengers in Radwanska’s quarter to show they can beat her. Montreal changed the equation for this part of the bracket. 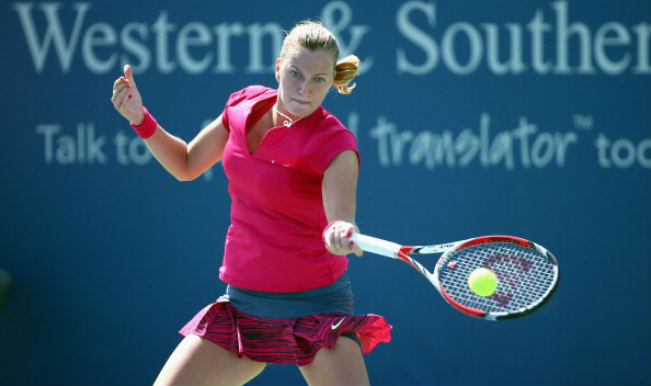 Petra Kvitova didn’t do much in Cincinnati or Montreal, entirely reinforcing the belief that if she’s not playing on the lawns of Wimbledon, she’s not going to last long at a major.

The final quarter up for examination is the second one in the top half of the draw, opposite Serena. This is the Kvitova quarter, and it stands in opposition to the main theme being advanced here.

Kvitova, though seeded third, owns a rather entrenched reputation, one that is not likely to change in New York. Kvitova reinforced a reputation in a good way at Wimbledon, claiming a second Venus Rosewater Dish and showing that she could indeed replicate great performances at a major. However, Wimbledon is the only major where Kvitova is likely to thrive. Roland Garros clay is too slow and bouncy for her. Melbourne, site of the Australian Open, is too witheringly hot for her. New York, especially before summer turns to autumn, is a hot, humid, noisy environment in which Kvitova’s allergies are exposed. Other high seeds deserve the benefit of the doubt at the U.S. Open. Kvitova is the exact antithesis; doubting her in New York should be the default position.

American up-and-comer Madison Keys could play Kvitova in the third round… if Kvitova gets that far. Victoria Azarenka, seeded 16th due to a lingering injury that has caused her to drop out of multiple tournaments in 2014 and shed a copious quantity of rankings points, is the fourth-round opponent for Keys or Kvitova (or someone else). Given that Azarenka’s injury is likely to continue to limit her in New York, the players in the lower section of this quarter — chiefly Eugenie Bouchard and Ekaterina Makarova — have a great chance to nab a semifinal slot against Serena.