The Wimbledon men’s singles draw is out. Click on each quarter of the draw to scan the full 128-player field.

If there’s a single theme which looms over the 2014 Wimbledon men’s tournament, it is that the first week can no longer be seen as an easy, breezy prelude to the second week. This statement flies in the face of the tournament’s history, but new winds are blowing at this point in the sport’s existence. In order to understand how different this year’s Wimbledon could become, you must first take a brief history lesson on the tournament in the Open Era:

Wimbledon is a place where the greatest tennis players do indeed prevail. The last truly surprising Wimbledon champion was Roger Federer — yes, the Swiss did rate as a somewhat unexpected champion once upon a time — in 2003. Yet, it goes without saying that Federer subsequently backed up that 2003 championship with six more Wimbledon crowns. Over the past 40 years at the All-England Club, you’ll find only a few unexpected champions, and even then, you’ll be able to identify players who possessed considerable quality:

Arthur Ashe, a genuinely distinguished player, took home the 1975 trophy with an upset of Jimmy Connors.

Boris Becker came from nowhere to win in 1985. As was the case with Federer in 2003, an unlikely champion proved how good he really was in subsequent years.

Pat Cash — who stands alongside Richard Krajicek as the weakest of any Wimbledon men’s champion over the past 40 years — won his only major title in 1987.

Michael Stich, a much more accomplished player than Cash, won his only major at Wimbledon as well in 1991. Unlike Cash, Stich managed to find a way to still be a factor after his Wimbledon win. No, he didn’t exactly enhance his credentials the way Wimbledon’s greatest champions managed to do, but he was at least good enough to produce one high-level major tournament every one and a half years or so.

Andre Agassi won Wimbledon in 1992, to the astonishment of everyone, including himself. Yet, several additional trips to the Wimbledon semifinals and a career Grand Slam marked him as a genuinely great performer regardless of surface or surroundings.

Krajicek’s 1996 title was every bit the surprise Agassi’s 1992 championship turned out to be. Krajicek made the Wimbledon semifinals in 1998 and lost to Goran Ivanisevic in a marathon fifth set, but he really didn’t sustain a high level of performance at the All-England Club.

Speaking of Ivanisevic, his 2001 title came out of the blue because the Croatian sensation was a wild card at that particular tournament. However, Ivanisevic produced a better career than either Krajicek or Cash, as much as that might surprise some tennis fans. Ivanisevic was a legitimately strong grass-court player, much more than Cash or Krajicek — at least in terms of results. “Emergency Goran” and his many moods reached a number of Roland Garros quarterfinals as well. He wasn’t quite a Johnny-one-note player away from Wimbledon.

Lleyton Hewitt’s 2002 championship was not expected, even though the Australian was one of the best players in the pre-Federer period. He made good (though not great) use of a small stretch of time in which Pete Sampras was too old, Andre Agassi was getting old, and Federer was still learning how to play the sport.

All in all, that’s eight surprise champions over 40 years. Three of them — Ashe, Agassi and Becker — won at least three of the four major tennis tournaments. Two others — Ivanisevic and Hewitt — were formidable contenders or floaters for roughly a decade on the ATP Tour. Only three of Wimbledon’s surprising champions over the past 40 years — Cash, Krajicek, and Stich to a slightly lesser degree — produced careers that were either ordinary or brief outside of their victories at SW19.

This really is a place where the best of the best hold the trophy on Centre Court after a full fortnight’s work.

History, therefore, says that the legends win here. Moreover, in 2014, it’s quite likely that another legend of the game will prevail. Yet, it’s anything but certain that more than two of them will get out of the first week. That’s what’s new at the All-England Club.

When his prime period ended, Roger Federer lost in Wimbledon quarterfinals — to Tomas Berdych in 2010 and Jo-Wilfried Tsonga in 2011. Last year, though, Federer — albeit while playing a perfectly solid match — lost in the first week of a major for the first time in NINE YEARS.

That’s right — Federer’s second-round loss to an out-of-his-mind Sergiy Stakhovsky (the Ukrainian played that well in what was a high-level match) broke a streak of 36 consecutive major-tournament quarterfinal appearances for the Swiss.

Yet, Federer’s loss was merely one of many calamities for not just high seeds, but highly accomplished players, in the first week of the 2013 edition of (as the locals call it) The Championships.

“Black Wednesday,” the tennis version, struck the All-England Club just three days into the event last year. As this overview of the day takes care to note, the flurry of shockers was accompanied by injuries caused by various slips and stumbles on the new, slick grass which is a part of life during Wimbledon’s first few days. 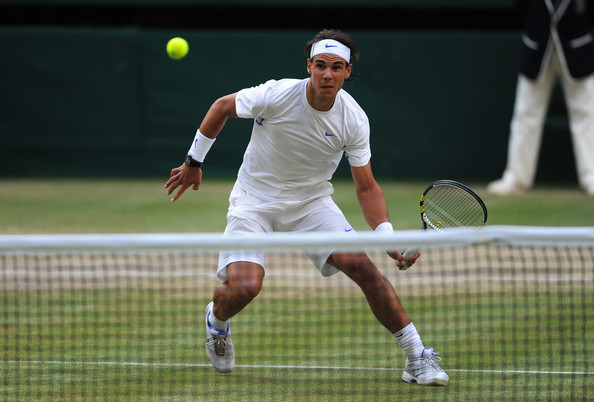 As early as 2006, Rafael Nadal showed how skilled he was as a grass-court player and, beyond that, as a tennis player who could take on any surface, any challenge, and any situation. After five years of great results at Wimbledon, though, the toll of playing on slick grass just two weeks after finishing Roland Garros has proven to be too much for the 14-time major champion. Can Nadal once again conquer the first week at SW19? If he can, he will once again be a favorite to win this title… but not until then.

Rafael Nadal — who made the finals in each Wimbledon he entered from 2006 through 2011 — has, like Federer, tasted vulnerability and tennis mortality earlier in this tournament in recent years. He lost in the second round of the 2012 event, to Lukas Rosol, and he lost in round one last year to Steve Darcis. If it’s not a unanimous opinion on Nadal, it’s definitely a majority opinion: The first week of Wimbledon is just as much of a challenge as the second week. If Nadal can get out of week one, the increasingly worn courts will play more to the 14-time major champion’s strengths in week two. Given Nadal’s second-week draw — Milos Raonic, an historically bad grass-court player, is in his quarter; Federer is in his half — the Mallorcan should be favored to win Wimbledon if he can escape week one.

The question is: “Will he get there?” It’s not as likely as it was six or seven years ago.

Yes, even in the past, Nadal has struggled in the first week en route to a championship at SW19. In 2010, he needed five sets to beat two below-average journeymen, Robin Haase (second round) and Philipp Petzschner (third round). Once he got past those tests, though, he rolled to the title. Is Rafa going to be able to survive week one this year, or will his body — perhaps dragged down by the cumulative strain of added miles on the tennis odometer — fail to move the way it needs to on slick grass? That’s just one of many “first-week” dramas tennis fans will have to pay attention to.

Here are the others:

Federer’s draw through the quarterfinals is very manageable, with one massive landmine lurking in the second round. He could either face Julien Benneteau — who came within two points of ousting him in the 2012 third round — or Gilles Muller, a thunder-serving lefty who has hugely underachieved in his career yet is eminently capable of having a great day at the office and scoring an upset.

More background about Muller is warranted here: He upset Andy Roddick in the first round of the 2005 U.S. Open. He pushed Nadal in the fourth round at Wimbledon in 2011. He gave Federer a tough ride in the 2008 U.S. Open quarterfinals. What did all those matches have in common? At least two tiebreakers. Muller serves like a demon, and if he gets past Benneteau, Federer will have to expect to win two tiebreakers to beat Muller, especially since his return is the weakest single part of his game at the moment.

A scary postscript for Federer: His momentous loss to Stakhovsky last year had this scoreline: 6-7 (5), 7-6 (5), 7-5, 7-6 (5). If Muller (the tougher matchup for Federer) meets the Swiss in round two, that kind of scoreline would hardly rate as a shock. All in all, when you look at the bottom half of the draw — with Federer and Nadal as the highest seeds — the second and third rounds could wind up being tougher than the fourth round and the quarterfinals. That’s not your father’s Wimbledon. 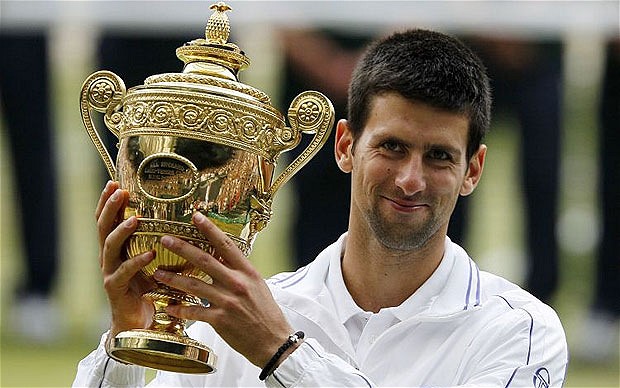 Novak Djokovic didn’t play in Madrid because of concerns about his wrist. He didn’t encounter any problems at Rome or in the French Open, but he’s being cautious about that same wrist in advance of Wimbledon. How that wrist holds up could very well determine if Djokovic is able to get past defending champion Andy Murray in a possible semifinal showdown.

In the top half of the draw, there’s a little bit of a Roland Garros repeat dynamic at work. Ernests Gulbis and Tomas Berdych met in Paris on red clay. This year, they could meet in the fourth round, with the winner to face Djokovic in the next round, as was the case at the French Open. Djokovic is also slated to play Tsonga in the fourth round, which would be an exact repeat of the just-concluded clay-court major.

Also mimicking Paris is the reality that Andy Murray once again received a great draw. He figured to make the quarterfinals at the French Open even though his credentials on clay have not been much to speak of over the course of his career. At Wimbledon, Murray’s only moderately difficult opponent through the first four rounds figures to be Roberto Bautista-Agut in the third round. Given that David Ferrer has not been particulary healthy in recent weeks — he’s in Murray’s quarter — the defending Wimbledon champion should be able to earn a semifinal date with Djokovic. Given that fresh questions have emerged about the health of Djokovic’s wrist, Murray’s odds of making the final are rather good… perhaps better than he could have expected before the draw was released.

If Murray gets to play anyone other than Nadal in the final (should he get there, of course), he would have to like his position.

We’re all waiting to see if Nadal — owner of five appearances in Wimbledon finals and two titles — will be able to fulfill his end of the bargain.

Unlike the period from 2007 through 2010, the answers to tennis’s most persistent Wimbledon questions just don’t come as easily as they used to. The content of those answers will point the way to the 2014 Wimbledon champion, which will be a member of the sport’s ruling class… but perhaps not the one you’re expecting.