When tennis fans and pundits sat down to preview the tennis season’s big week in Canada — with the WTA in Toronto and the ATP in Montreal — they couldn’t possibly have known what was about to unfold in the great North.

Try to go back to the morning of Sunday, August 9, when the two-city tennis party was just getting started, and the Washington and Stanford tournaments were about to stage their respective finals. Recall how you felt at that point. Re-create what you were thinking.

Sweet mercy, the course of human events had a field day in the provinces of Ontario and Quebec.

These weren’t major tournaments, but the two halves of the Rogers Cup (WTA and ATP) felt substantial — they conveyed a sense of weight, of heft, that Premier 5 and Masters 1000 events don’t typically confer upon spectators or television viewers. The winners of these tournaments, Belinda Bencic (WTA) and Andy Murray (ATP), might not have radically improved their chances of winning at the U.S. Open in a few weeks, but even then, the past week in Canada shook up the tennis world just the same.

Everyone moves to the joint-tour event in Cincinnati this next week, but we have to make at least some sense of the craziness that marked the Rogers Cup’s two iterations.

Have you tried to remember what you were thinking on the morning of August 9?

Maybe, on that morning, with the top players on tour — Serena and Djokovic in particular — returning to the court after multi-week vacations, you went wild and imagined the most ridiculous, preposterous things.

Sara Errani acing Simona Halep (or anyone else) on a second serve.

Errani beating Victoria Azarenka, who played one of the matches of the year against Serena Williams at Wimbledon just one month earlier.

Jeremy Chardy winning the second set of a match with seven games in four straight matches.

Jeremy Chardy winning the second set of a match in a tiebreaker in three straight matches.

John Isner failing to convert two match points on his own serve.

Serena Williams losing to an 18-year-old.

Djokovic AND Serena losing matches in the same week in 2015.

Simona Halep making the final of a tournament.

Halep winning a match after getting bageled in the first set.

Halep winning a set while looking like a person on the verge of physically collapsing.

An opponent playing her worst tennis while Simona Halep could barely move at times.

An 18-year-old beating Serena after trailing love-40 at 5-all in the second set, on the precipice of defeat.

An 18-year-old capturing a WTA Premier 5 tournament by winning all six of her matches against former major finalists.

Andy Murray hitting a decent second serve. (That might be the wildest fantasy of all.)

All those things you might have dreamed of a week ago, all those crazy and absurd notions of an alternate tennis universe, all those flights to the other side of the moon — THEY HAPPENED THIS PAST WEEK IN CANADA.

Think that’s the end of it?

The real kicker — or as Oscar Madison said in The Odd Couple movie from 1968, “The ever-loving lu-lu of all times” —  is that NONE of those events represented, by any reasonable measurement, the most insane, boisterous or controversial occurrence from the week. 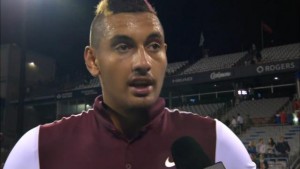 There was nothing funny or enjoyable or impressive about that ugly series of events, another classic instance of tennis — as a (loosely- or barely-governed) sport — failing to get out of its own way.

Yet, the feast of riches throughout the week, the buffet table of surprises and high-wire acts — one after the other — created an absolutely riveting spectacle at a non-major event. Tennis, bursting with color and plot twists and resurrections and rare moments of triumph for a number of players, offered something for everyone the past week.

Even for the two reigning figures in tennis — Serena and Djokovic — their failures to win in Canada might refresh them and cleanse the competitive palate for the U.S. Open. Defeats here could very well work to their advantage by sharpening their instincts and removing the “Am I going to lose anytime soon?” question from their minds.

It was a remarkable week, and the fact that it stood between the lower-tier summer events and the U.S. Open made it revealing and instructive in terms of the way we (fans and commentators) view tennis players.

This is the other half of the story of the 2015 Rogers Cup, in Toronto and Montreal.

The story of this week in Canada has been written, and yet it’s not entirely in the past tense just yet. We’ll want to see the U.S. Open and measure it against Toronto and Montreal. What was a mirage or a flickering tease of hope, and what marked a substantial upward climb? What marked a genuine regression, and what marked a hiccup which also offered the hidden blessing of added rest before Cincinnati and the big one in New York? These answers can be guessed at in the present tense, but they won’t be known until September. It makes this part of the tennis season so fascinating, and it offers a lot to say about how we view these athletes, each in his or her own particular situation.

For WTA champion Belinda Bencic, this triumph in Canada will mean something different in comparison to the men’s champion, Andy Murray. It’s a moment to savor for both players, but the shelf life and long-term resonance of the event will be seen and measured in different ways. This is, in so many ways, the story of tennis over a full season.

Bencic, one would think, is not going to stomp over everyone on tour with relentless regularity. She’s going to have her moments, but she’s likely to run into in-form foes and take her share of lumps over the next two years. Just look at how Eugenie Bouchard (whom Bencic dismissed in round one) and Simona Halep (whom Bencic outlasted in Sunday’s final) have struggled to varying degrees in 2015 after breakthrough 2014 seasons. Bencic gives every appearance of being (and becoming) a player who will win majors one day, but the road to the top is not an uninterrupted journey. It will involve slips and stumbles and periods of uncertainty. This is definitely a championship that should be valued for its own sake. It won’t be easily replicable, but it will show her over the next few years what she is capable of. Anyone who can compete (not just perform, but compete) the way Bencic did at the age of 18 can go a long, long way in tennis, and that basic knowledge is what will serve the Swiss well in the years ahead.

For Murray, this championship is valuable on its own terms — it gives the Scotsman a second Masters 1000 title this year, a first win over Djokovic since the 2013 Wimbledon final, and a world No. 2 ranking ahead of Roger Federer, putting Murray in position to get the second seed at the U.S. Open and thereby avoid Djokovic until the final. Yet, for all of those benefits, this championship might be more valuable as a gateway to the future. It can show Murray what happens when he hits a decent second serve and plays with ruthless aggression. It can show Murray what happens when he plays a more attacking and less passive style. (Perhaps Federer’s masterclass against Murray in the Wimbledon semifinals impressed upon Muzz the need to play more first-strike tennis.)

If Murray loses before the finals of the U.S. Open — he’s made two finals in New York, but only one in the past six years — this Montreal moment will recede in significance. However, if Murray does encounter Djokovic in another U.S. Open championship match (the first being in 2012), he can use this match as a convincing reason to think that a third major title can be won.

Beyond Bencic and Murray, the week in Canada showed just how much various tournaments and championships mean to the full community of tennis players… and to the people who observe tennis — some for fun, some for a living (and some for a mixture of both, leaning more toward the fun part).

A week earlier in Washington (ATP and WTA) and Stanford (WTA), Kei Nishikori and Angelique Kerber won lower-tier titles. By all means, any player — regardless of reputation or longevity or anything else attached to a name — should be applauded and admired for winning any tournament. The level of admiration might vary, but the fundamental act of acknowledging a happy occasion should take precedence when the last point is played. That day belongs to the player, and should be savored no matter what else anyone might say.

When the calendar turns to the following week, though, and the scene shifts to a different city, and the level of prestige at a given tournament increases, and the stakes involved are bigger than they were seven days earlier, the discussion changes. The dial is reset. The landscape acquires a different color.

Some professional tennis players are in positions where their talents are best used in the pursuit of mid-level tournaments. That’s where they can maximize paychecks and derive the most satisfaction from playing. Other players want to be the very best, but they have to play more events in the attempt to try to get rankings points and match-play experience. They’re caught in between the competing desires to win and to season themselves for the future.

Other players, though, have arrived at points in their careers where they’re not playing for the money (they have more than enough of it) or the mid-level titles. A number of tennis professionals have displayed the talent, the toughness, the stamina, the cleverness, or any or all of the above — enough to show to themselves and others that they are capable of winning major titles. A subset of the larger community of tour-level players can be regarded as the top tier of the top tier.

Yes, if you’re one of the 100 best in the world at your profession, you’re very good, but the cruel and unforgiving realm of professional tennis puts the top six (or 10, or 12) in a separate category.

This is why winning Washington and Stanford will mean different things to different people. Canada and Cincinnati are bigger.

This is why winning Canada and Cincinnati will mean different things to different people. The U.S. Open is bigger.

Do athletes want to win any tournament, or do they want to win the tournaments that matter? They get to make the choices and live with them. They also know — as all athletes do — that their choices help determine (though not necessarily guarantee, for better or worse) how history will remember them.

Belinda Bencic’s Toronto title rates as a more significant and meaningful accomplishment than Andy Murray’s Montreal championship… but Murray’s championship will grow in stature if it leads to a U.S. Open title.

Simona Halep valued this Toronto title enough to keep playing through the second set, but in doing so, she showed a lack of regard for the U.S. Open at a time in her career when the majors are what she should be thinking about.

Similarly, Kei Nishikori — by playing in Washington — left himself spent in the latter stages of Montreal. He should be aligning his schedule for (and around) the majors, but he hasn’t reached that stage in his thought process yet. (In that sense, he’s the new Nikolay Davydenko… although unlike Kolya, Kei has already made a major final.)

Those are opinions, not facts, but they merit thought as a wild week in Canada can be seen in the rearview mirror.

On to Cincinnati… where we’ll see if more truckloads of surprises await the global tennis family.