The draws are out for the 2015 Australian Open. In both the women’s and men’s events, the first few days of the tournament offer the promise of a few main-event matches, which is not always something you get at a major. It can take time to stumble upon the kind of centerpiece which pushes other matches to the side at a major. That kind of event might not emerge until the second week.

At this year’s Australian Open, though, we won’t have to wait long for some huge matches in both 128-player draws.

Before we get to the quarterfinals and beyond, there are some early-day dazzlers to consider: 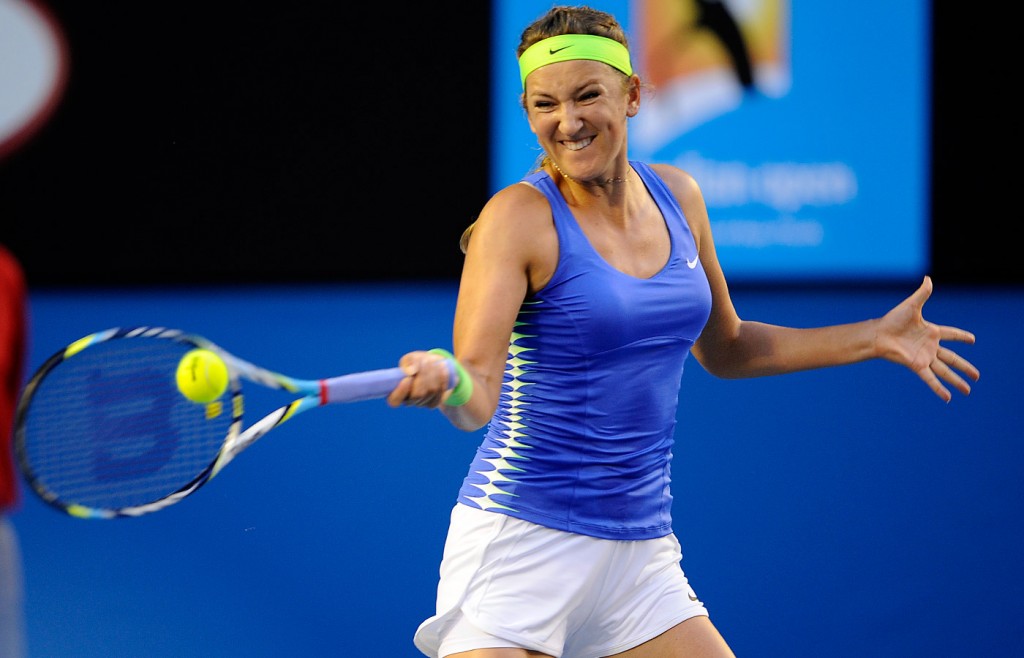 Before the draw came out, everyone knew that Victoria Azarenka’s place in it was going to rate as a huge story. Azarenka’s injuries in 2014 made her an unseeded player at this tournament. A big name was going to have to face her early in the event.

As it turns out, that big name happens to be the most resurgent player on tour… but even before that, a blockbuster first-round match awaits.

Azarenka’s first-round opponent in Melbourne is Sloane Stephens. This is a big deal not because of Stephens’s name — the American is not a top-tier presence in the sport, given her year-round inconsistency and a regression to the mean at the majors. Stephens had reached the fourth round or better at six straight majors, but she them flamed out early at both Wimbledon and the U.S. Open.

Why is Azarenka-Stephens a main-event match? Global tennis fans know exactly why. Until the first ball is struck in this match, you know which first-round women’s match ESPN commentators will talk about more than any other.

If Azarenka does manage to get past Stephens, she’ll then face Caroline Wozniacki in the second round. Wozniacki’s contentious battles with Serena Williams during the summer hardcourt season, followed by a (less contentious) meeting in the U.S. Open final and then a memorable slugfest at the WTA Finals in Singapore in October, marked the Danish star as a factor, once again, on tour. After a few years in the tennis wilderness, Wozniacki is a top-tier contender at the majors and other signature tournaments as 2015 begins. A second-round match between her and Azarenka is as amazing a round-of-64 match as one could possibly hope for at the majors.

Adding to the richness of this early portion of the draw: If either Wozniacki or Azarenka makes the quarterfinals, Serena Williams awaits in what would be a final-level matchup, played three or four days before the final.

The top quarter of the draw has our full attention.

The second quarter of the draw (also in the top half) is a free-for all, with Petra Kvitova — rarely a solid player at the non-Wimbledon majors — occupying this portion of the bracket along with Agnieszka Radwanska. This quarter provides an opportunity for floaters and upstarts to make a move.

The bottom half of the draw takes the magic of the Serena-Vika-Sloane-Wozniacki quarter and replicates it on multiple levels. 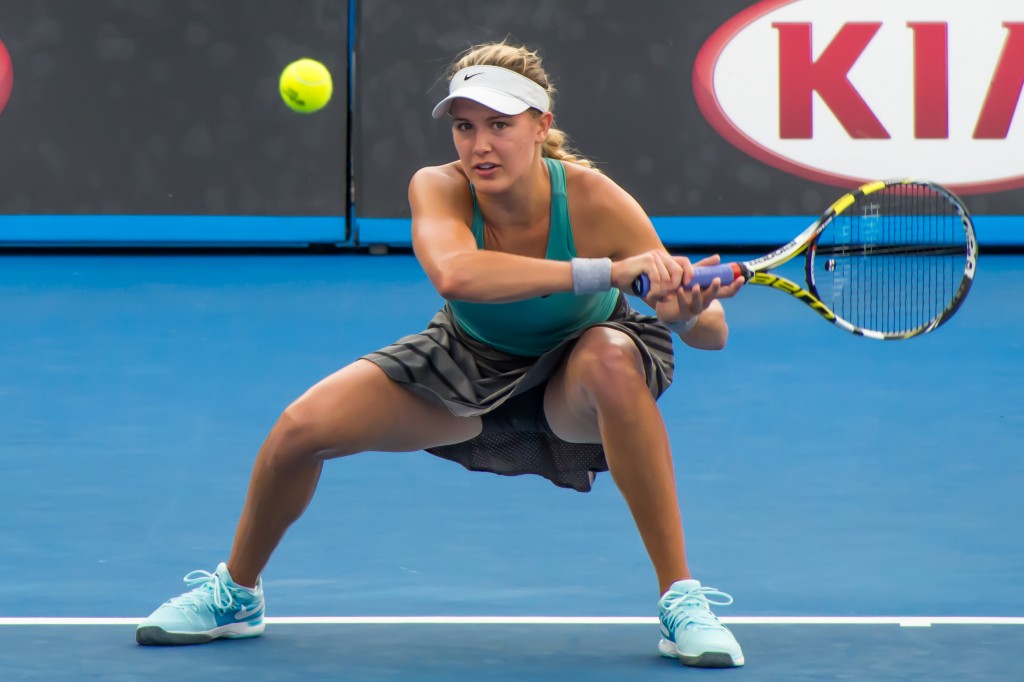 The bottom (fourth) quarter is the other showcase quarter in the women’s tournament. There isn’t the snap-crackle-pop in the early rounds offered by Azarenka and Wozniacki, but if the higher seeds reach the quarters, the tournament is going to enjoy some true showstoppers.

In that bottom quarter, the two highest seeds are No. 2 Maria Sharapova and No. 7 Eugenie Bouchard (pictured, above). Yes, U.S. Open semifinalist Peng Shuai and Wimbledon quarterfinalist Angelique Kerber are also in this quarter, but it’s hard to deny the appeal of a Sharapova-Bouchard showdown after their dramatic French Open semifinal last year. An established veteran (Sharapova) against one of the foremost young forces on tour (Bouchard) would not create an aesthetic clash, but it would pit the old guard against the new, becoming a compelling occasion for that reason.

In the third quarter, the dynamic is very similar. 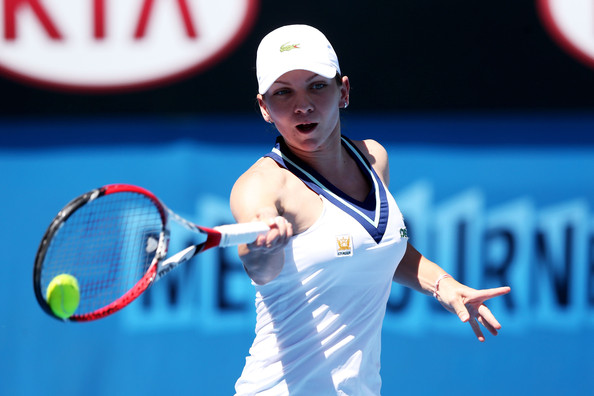 Simona Halep (pictured, above) and either Ana Ivanovic or Ekaterina Makarova are on a collision course for the quarterfinals. Ivanovic and Makarova would have to deal with each other in the round of 16 if they both get that far. Should the winner meet Halep, the tournament would unearth yet another pairing between one of 2014’s more ascendant talents and a veteran on the north side of 26 years of age with designs on a mid- or late-career breakthrough.

There’s a lot to like about this women’s draw, first because of Azarenka’s mini-section, but then because three of the four quarters promise buzz-worthy matchups, culminating in what should be a final for tennis fans to savor.

No picks here, but let’s offer some expectations for the notable players mentioned above:

SERENA – win the championship. She’s the best, as she reminded us at the U.S. Open and the WTA Finals. She should expect to go the distance at the most important events on tour.

WOZNIACKI – quarterfinal. If Wozniacki wants to back up her 2014 with a solid start to 2015, she shouldn’t be expected to beat Serena in the quarters after a brutal draw in the first four rounds. However, she should be expected to get there.

If that’s the case, then…

AZARENKA – quarterfinal. If she is expected to make the second round and nothing beyond it, we’re selling Azarenka short. If she fails to beat Wozniacki, though, the result shouldn’t be held against her, given all the time she’s spent off the court. However, Azarenka is an elite competitor. Giving her a lower bar to shoot for seems to do her a disservice, though reasonable people can disagree on how to handle the expectations game.

IVANOVIC AND MAKAROVA – quarterfinal. If either player wants to be seen as a contender in 2015, getting past that round of 16 hurdle would represent an important forward step.

HALEP, BOUCHARD AND SHARAPOVA – final. The fact that she refused to tank at the WTA Finals — which meant that she’d have to face Serena Williams in the final — showed how much Halep respects the sport. She needed the long offseason to regroup. Now that it’s go time in Melbourne, Halep has every right to think that she should be standing on one side of the court come the final on January 31.

Bouchard did a lot of heavy lifting and high climbing in 2014, before the wear and tear of life on the circuit wore her down in September and October. Now that she’s physically fresh, Bouchard — who beat a hobbled Halep in the Wimbledon semifinals last year — should carry the same expectations as the Romanian.

Maria Sharapova knows that Roland Garros is the one major where she does really well, but as is the case with Azarenka, Sharapova shouldn’t expect anything less than the maximum. Beating Serena would be a near-impossible task, but getting to the final? Why shouldn’t she expect (or be expected) to make the final? She beat Halep in Cincinnati last summer and took down Bouchard at Roland Garros.

Let the games begin, starting with Azarenka-Stephens. The women’s draw should finish with a flourish, but the opening days of this tournament don’t figure to be very dull, either.