The Australian Open really does exist on an island, an appropriate reality for a country which is in fact geographically isolated from other continents. Plunked in late January, the so-called “Happy Slam” occurs roughly four months after the end of the U.S. Open, and it finishes roughly four months before the start of Roland Garros. Players are generally fresher at the Australian Open than in any other major, because they’re coming off the extended break afforded by the offseason. What does this mean for the rest of the year? You could go in either direction with your analysis.

On one hand, the fact that players are fresh could point to a successful event for the elites, who aren’t worn down and are therefore ready to bring their best. The men’s side of this tournament has generally upheld that line of thought over the past decade, after being noticeably volatile and unsteady just before the arrival of Roger Federer as a top-flight player at the 2004 edition of the tournament.

As for the women, it’s a little bit harder to draw firm conclusions based on the past decade of Australian Opens, but it’s definitely easier to claim that what happens in Melbourne doesn’t necessarily flow through the rest of the year. Last year’s tournament cut in both directions. On one hand, Li Na and Dominika Cibulkova did not sustain what they achieved in Australia. On the other hand, the emergence of both Eugenie Bouchard and Simona Halep in the tournament did in fact point to quality results for most of the remainder of 2014.

It is with this context in mind that Victoria Azarenka and Caroline Wozniacki faced each other in a second-round match that carried the weight of a semifinal or final. It might have been just the fourth day of this two-week event Down Under, but Azarenka-Wozniacki demanded stand-alone attention from the wider tennis community. Here’s what’s worth taking away from Azarenka’s 6-4, 6-2 triumph:

First of all, this match ought to be treated delicately from both sides of the equation. To be more direct, it shouldn’t be seen as a sweeping verdict on each player and how they’ll perform as 2015 moves along. It is important to avoid succumbing to the “one-match overreaction,” something I have failed to do in the past. It is very tempting to say that Azarenka is set for a big 2015, and that Wozniacki is conversely going to take a big tumble this year, but do we really want to derive that much from one match on January 22?

Let’s step back and pay attention to a few salient details about this match and the backdrop which enveloped it:

1) This was a second-round match, even though it carried the flavor and feel of a semifinal or final. What’s important here is that even the best players (Rafael Nadal and Maria Sharapova being classic examples, as we saw earlier in the week) play their way into tournaments and do not peak in week one. Typically, they don’t have to be at their best right away. This matchup between Azarenka and Wozniacki in the round of 64 occurred as early as it did because of Azarenka’s prolonged injury-based absence from the tour last year, not because of a dip in quality when healthy. Wozniacki had the rotten luck of drawing such a formidable player in the early rounds. It’s a lot harder to judge Wozniacki as a player in full based on a sluggish second-round match against a player with top-5 chops… and who is likely to get back there before too long.

2) Let’s emphasize that last point: Wozniacki was indeed sluggish on court against Azarenka. This is not excuse-making or anything meant to suggest that this was just an “off day” for Wozniacki. This is just the reality of what happened inside Margaret Court Arena. Wozniacki lagged well behind Azarenka in this match, and she also failed to rise to the standard she set for herself in her strong summer-autumn run, when she pushed Serena Williams at multiple North American tournaments plus the WTA Finals in Singapore.

Wozniacki was the inferior defensive player in this match — Azarenka did so much more with her shots, especially her two-handed crosscourt backhand, from defensive positions. Wozniacki, when playing up to her capabilities, is the better defensive player on the court, but that was not the case against Azarenka. Wozniacki simply did not feel the ball or settle into the flow of the match. She was outfoxed and outhit, comprehensively outplayed. 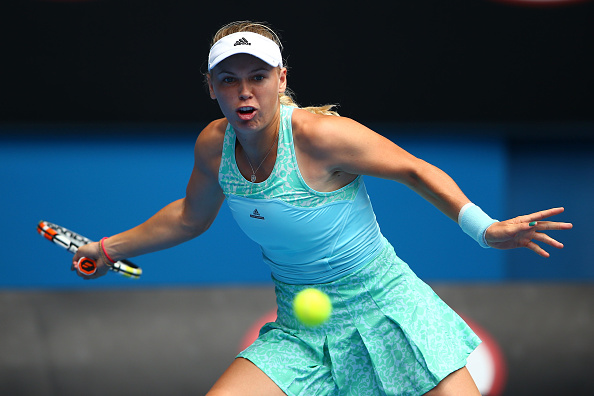 Caroline Wozniacki lacked answers against Victoria Azarenka on Thursday, but should we assume she won’t have answers in similar situations for the rest of 2015? No. There are certainly some components of this match Wozniacki should be concerned about, but the notion that these deficiencies will linger for the rest of the year seems highly premature. She did, after all, lose to an opponent who flourished for much of this match, especially the second set.

A central feature of Wozniacki’s insufficient performance was her punchless forehand. It produced a lot of loopy shots without the occasional hard and flattened drives which kept opponents off balance last August and September. Wozniacki’s playing style might not have been all that different from her typical template last summer and fall, but she was able to hit through the court a little more often with her forehand… often enough, at any rate, for opponents to notice.

Often enough for her opponents to fail to beat her, with the consistent exception of Serena.

As we go forward in 2015, let’s see if Wozniacki continues to be this sluggish against top opposition. Should one expect the Danish star to remain at this inadequate level? No. It’s hard to think that months of good work in the second half of 2014 will just as abruptly dissolve into the mists of history and not continue to bear fruit in 2015.

What we should really be focusing on here is:

3) After what was a very uneven eight-game start to the match, Azarenka — being the excellent competitor she is — not only smelled blood but flawlessly executed a clean kill when she got that sniff.

This is the most impressive aspect of the match itself, but also the signature virtue of Azarenka as a tennis player: She’s a ruthless competitor, even more so than Maria Sharapova. (This is not about Maria failing to match Vika’s standard; it’s more properly seen and framed as Vika eclipsing Maria’s lofty level of competitive quality.)

One enduring truth in all sports is that the way in which a player (or team) succeeds or fails in live competition can very easily affect the response of the opponent.

In American-style football (I know I have international readers here, hence the distinction from global football…), being able to score by running the ball up the middle conveys more psychological freight than winning with trick plays or fade passes.

In basketball, being able to score by dunking the ball and powering the ball to the basket carries more of an impact than hitting mid-range jump shots.

In baseball, scoring three runs on three massive home runs in the opening innings of a game can shake an opponent and an opposing pitcher more than two infield singles, a walk, and a bloop double. Conversely, the pitcher who can strike out opposing hitters by blowing them away on 102-mile-per-hour fastballs can intimidate in ways that off-speed pitchers (who might be just as effective) never can. The way in which one succeeds or fails can matter, and this sets the stage for a proper appreciation of what Azarenka did against Wozniacki.

In the eighth game of an uneven first set, Azarenka got broken after leading 40-0, serving at 4-3. Azarenka littered the stat sheet with errors in that game, and both players were very tight at that point in the match. Having just seen Azarenka squander a meaningful advantage in a set most pundits felt the Belarusian had to win, Wozniacki should have felt emboldened and, moreover, relieved. Despite being blasted in the first three games of the match — falling behind 3-0 — Wozniacki had weathered that storm and found temporarily level footing thanks to Azarenka’s regression to the mean. Serving at 4-4, Wozniacki had a chance to cement the shifts that appeared to be taking place in the match.

However, instead of solidifying, Wozniacki’s game declined. A series of errors put her in trouble, and Azarenka — finding the corners of the court with more regularity while also making smart net approaches — broke for 5-4. The quality of tennis was not sublime in that small (two-game) stretch of play, but what’s essential to note is that Wozniacki was shown a path to safety at 4-4, only to fail to run to the light.

Once Sunshine failed to run to daylight, Azarenka closed the door and darkened the outlook for her opponent.

In the second set, we saw something different from the first. Yes, it’s true that Wozniacki’s forehand continued to lack conviction — that remained true throughout the match — but Azarenka began to take off. Playing the full-flight tennis that carried her to the world No. 1 ranking and made her the second-best player in the world at the end of 2013 (before the injury bug swamped her in 2014), Azarenka overwhelmed Wozniacki, changing the conversation from the Dane’s deficiencies to the Belarusian’s manifold strengths.

Azarenka wasn’t at her best in the first eight games, but as soon as Wozniacki failed to consolidate the shift in momentum that was within her ability to attain, Azarenka’s best competitive instincts kicked in. She did a lot of kicking (of Wozniacki’s posterior) over the last nine games of the match, ultimately cruising to the finish line with a display that left her opponent powerless.

Does this mean that Azarenka is back? Certainly in terms of combining quality play with first-rate competitive instincts.

Does this mean Azarenka is ready to beat Serena Williams, or at least come close?

If she and Serena win two matches apiece in the coming days, we’ll get to see them meet in the quarterfinals.

Then we can say more about this match against Wozniacki, the first true “measuring-stick moment” of the 2015 WTA season. We’ll see just how much of a revealer — or an aberration — this match turns out to be when October arrives, and we’re writing our retrospectives on this season in women’s tennis.