“Neither snow nor rain nor heat nor gloom of night stays these couriers from the swift completion of their appointed rounds.”

The above quote is an inscription on the James Farley Post Office in New York City, a proclamation of the mindset postal carriers must bring to their work.

If Serena Jameka Williams had been a postal carrier, she’d have been the best in the world, much as she’s currently the best female tennis player in the world, possibly of all time.

Yes, Serena soared once again at a major tournament, surpassing Chris Evert and Martina Navratilova on the list of all-time major singles title winners. The younger Williams sister bagged her 19th major by defeating an impressive, resilient and improved version of Maria Sharapova, 6-3, 7-6 (5), on Saturday night in the Australian Open women’s final. The match itself was tremendous — it certainly would grade out to an “A-minus” at worst, and even then, that’s probably nitpicking and borderline uncharitable. Yet, what will linger in the public memory as far as this match is concerned is not that Serena was excellent — we’ve become accustomed to that — but that she was excellent under the particular set of circumstances that greeted the match.

Neither snow nor rain nor heat nor gloom of night must be allowed to deter a postal carrier.

For Serena Williams, her persistent cough could have deterred her.

So could have a needless rain delay in the middle of a 30-all service game midway through the first set.

So could have a (proper, accurate) hindrance call which enabled Sharapova to gain a break point chance in the latter half of the second set, which was — quite simply — the best set of tennis played at this whole tournament by two players.

So could have the errors which occasionally crept into Serena’s game just when she seemed to be on the verge of smothering Sharapova at various points throughout the second set.

So could have a let call on Serena’s third championship point. Serena thought for a brief moment that she had won the match and the tournament. When the enormity of the let call sank in, she had to regroup in a way few tennis players ever get the chance to do. It’s a happy burden — to be in such a position, one point away from a major title — but it’s still a huge burden just the same. Serena had to deal with it, and naturally, at 6-5 in the second-set tiebreaker — one of the ultimate single-point crucibles in tennis — Serena was able to fire the same serve (hard and flat, out wide to the Sharapova backhand) for the ace that was denied her just moments earlier.

Serena could have been deterred by sickness, by the pressure of the occasion, by the odd events that tripped her up for brief stretches — by so many things.

Most of all, though, Serena could have been deterred and denied in her bid for history (and a sixth Australian Open title) by her opponent. 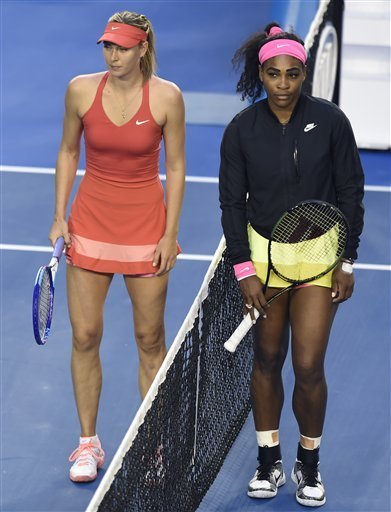 Both Maria Sharapova and Serena Williams stood tall on a night when women’s tennis displayed the very best it had to offer. The highest ranked players in the world performed up to their credentials, creating as good a straight-set final as one could possibly have hoped for.

Even though Serena Williams had entered this match having won 15 straight matches over Sharapova — over the course of 10 full years, dating back to the 2005 Australian Open — the underdog did not reveal the fragile self which has, at times, turned this matchup into a mismatch.

This time, Maria Sharapova’s serve held up under pressure. This time, Sharapova was able to take the initiative on her service points, especially in the second set, and not allow Serena to gain as much of a foothold as she normally has in this head-to-head competition. Serena’s serve, which hammered 18 aces in two sets and generated many more cheap points as either service winners or forced-error creators, is the best shot in contemporary women’s tennis. Therefore, it’s no surprise that Serena worked her way out of love-30 deficits on multiple occasions in this match.

What was surprising about this match is that Sharapova was able to blast her way out of trouble on serve.

Serving at 0-1 and 15-40 in the second set after being “routined” in set one by a 6-3 score, Sharapova was already on the ropes. A global television audience — not to mention the paying spectators inside Rod Laver Arena in Melbourne — had every right to expect that this match was going to end sooner rather than later. Based on recent history in this head-to-head pairing, Serena appeared to be ready to cruise to the finish line with a 6-3, 6-2 scoreline.

Sharapova, whose service yips have dogged her for much of her impressive yet nowhere-near-Serena career, would have nothing of it. Booming a couple of aces and a service winner, Sharapova emerged intact from that 15-40 deficit. She held for 1-all and established the template for a second set in which neither player lost serve. The quality of Sharapova’s first serve deserted her in the tiebreaker — when elite players need it the most — but for most of the night and through all six service games in the second set, Sharapova served herself well. For the match, Sharapova finished with more aces (5) than double faults (4), which is impressive for her. The No. 2 seed ended the match with a plus-6 winner-unforced error differential (21 to 15), another telling sign of how well and cleanly she played. This version of Sharapova is good enough to win majors, good enough to produce a spectacular 2015…

… if Serena Williams plays well below her best.

On Saturday, despite the occasional error in a big moment, Serena was — if not at her absolute best — close enough to her highest level to deny Sharapova once again. Whenever trouble loomed, whenever the flow of the match extended an invitation to succumb to pressure, Serena — being the champion she is — always responded the right way. She responded to the scoreboard. She responded to the hindrance call. She responded to the let on championship point. She responded, most of all, to each and every brassy, steely, tough-as-nails service hold from Sharapova in that classic second set.

We are brought to a core truth about this match: Sharapova — by displaying a level of quality occasionally but not often seen against Serena Williams — forced her opponent to rise to a higher level. Serena’s ability to successfully do so enables her achievement to become enlarged and magnified.

Serena flourished at two previous points in her career: 2002-2003 and September 2008-July 2010. Serena won bunches of majors in those two stretches, five in each of them. In the third prime period of her career, beginning with her 2012 Wimbledon title, Serena has added six more majors to her trophy case.

What is instructive to point out about these three prime periods is that in the first two, Serena had a great rival/obstacle to overcome. In each of them, Venus Williams was a rival, especially at Wimbledon. In the second prime period (2008-2010), Justine Henin and Kim Clijsters were players Serena had to work hard to beat. In this most recent prime period, Victoria Azarenka has become the top player who could push Serena more than most. Sharapova’s comparative lack of resistance when measured against Azarenka sometimes made Serena’s achievements feel like the product of a weaker era, in much the same way that Steffi Graf won a lot of majors in the absence of a fully fit Monica Seles following the 1993 stabbing of the rising lefty star.

With that bit of context serving as background, the very fact that Sharapova played so well on Saturday, asking many more questions of her opponent than in previous encounters, enables Serena Williams’s greatness to become that much more pronounced.

There wasn’t any snow in Melbourne on Saturday, but there was rain. Serena Williams, though sick and hindered at times, wouldn’t let anything — or anyone — get in the way of her march toward history. Fending off tricky circumstances, and a conspicuously more formidable version of Maria Sharapova, will only add to the growing belief among many that Serena Jameka Williams is the best we’ve ever seen in the history of women’s tennis.