Anyone who appreciates tennis knows there are many ways to win a match.

You can play great offense or great defense. You can play first-strike tennis or grind from the baseline. You can play with pace or take pace away. You can hit hard and flat or use lots of topspin or slice. All the shots and tactics that are part of tennis play into a larger tension and choice for the competitors inside the rectangle: Should a player try to win by hitting winners or by making his opponent hit errors? Is the secret to keep the ball within the lines or to make the opponent hit beyond them?

It’s obviously a bit of both, but players generally make decisions in terms of how they want to approach the sport, especially a big match such as an Australian Open men’s semifinal.

Friday night in Melbourne, Novak Djokovic didn’t win by cranking out winners, by hitting past his opponent, or by putting on any sort of show. Djokovic repeatedly squandered break leads over the course of the first four sets against defending champion Stan Wawrinka. Djokovic couldn’t stand prosperity. He looked uncomfortable on the court for all of the three and a half hours it took to complete a 7-6 (1), 3-6, 6-4, 4-6, 6-0 victory over his fourth-seeded counterpart, in a five-setter that fell well short of 2013 and 2014 clashes in Melbourne.

Yet, that last detail is all that matters: Djokovic won.

Anyone who has followed the Serbian’s rise to the top tier of men’s tennis over the past four and a half years — an ascendancy which truly began with a five-set escape over Viktor Troicki in the first round of the 2010 U.S. Open — knows that Djokovic is a master at winning ugly, at prevailing precisely when he looks bothered, bewildered, and out of breath. Everything about his outward appearance can be unsettled, but Djokovic winds up settling himself enough to win. He calms himself enough to make himself a steadier player than his opponent.

Friday against Wawrinka, in an utterly forgettable match, Djokovic brought this unique skill to the forefront once again.

How dire was Djokovic’s situation at the start of the fifth set (trust me — if you missed this match in the overnight hours of Friday morning in the United States, you don’t want a rehash of the first four sets)? In set four, Djokovic hit as many winners as I did: none.

Sluggish and sloppy, Djokovic failed to close down a match in which he won the first and third sets and took a break lead in the fourth against Wawrinka, who — following a nearly flawless quarterfinal demolition of Kei Nishikori — simply lacked the same touch with his magic wand, especially on his lethal backhand wing. Djokovic was down a break point in the first game of the fifth set. His Australian Open stood on the precipice of disaster.

What — or rather, who — enabled Djokovic to pull through? Wawrinka, that’s who. The Swiss missed a backhand in his wheelhouse on that break point, and as soon as Djokovic gained a reprieve, the top seed in the tournament tightened up his defense and made Wawrinka hit extra balls to win points. In the latter half of set four, this is what Wawrinka did to level the match, but in set five, the defending champion’s title defense came to an end because he couldn’t remain patient.

Djokovic — though cranky and out of sorts — cultivated patience in a moment of crisis. That’s why he’s in the winner’s circle and Wawrinka will drop to No. 9 in the world when the new rankings are official on Monday. 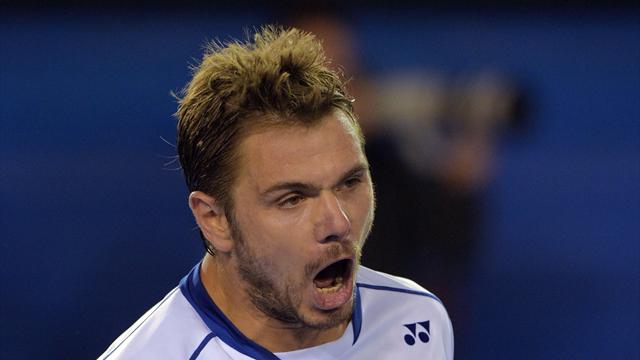 Stan Wawrinka has plenty to lament about his performance on Friday, but a semifinal result in his first-ever major title defense is nothing to sneeze at. We’ll see how well Wawrinka can perform in this first full calendar year following a 2014 to remember.

After winning the Australian Open in 2014, losing in the semifinals represents a point reduction of 1,280 for Wawrinka (2,000 for winning the tournament down to 720 for a semifinal result). This will make future tournaments such as Indian Wells and Miami very complicated for the top seeds and those seeded 5-8 in a bracket. More immediately, though, Wawrinka’s loss means that the Australian Open will be won by a member of the Big Four, a group that became the Big Three last year when Andy Murray — Djokovic’s opponent in Sunday’s final — struggled following back surgery late in 2013.

You don’t rise to the heights Novak Djokovic has attained in men’s tennis without being able to win on days when feel, form and flow are just not there. Djokovic’s constant ability to survive matches when his shots are not clicking is why he finds himself in a 15th major final, a sterling achievement in the age of Federer and Nadal. To expect all six pre-final major-tournament matches to be equally smooth is just not realistic. The only thing which truly matters is survival on a given day, creating an entirely new context and outlook for the next match on a different day.

Novak Djokovic has given himself a new and different day on which to play at the Australian Open. If he lifts his game back to a customarily lofty level on Sunday against Andy Murray, he’ll win an eighth major championship. This messy display against Stan Wawrinka — though not to be lauded for its quality in any way — will be seen as yet another manifestation of a champion’s enduring perseverance.

Novak Djokovic didn’t win this match so much as Stan Wawrinka lost it.

Not losing, though, sure beats the heck out of not winning. You’d take it. I’d take it. We’d all take it any day of the week.

Novak Djokovic will take this escape into Sunday, when he’ll have a chance to make more history in Melbourne.