At the 2015 Australian Open, the quarterfinals went quickly, with seven of eight matches (four for both genders) concluding in straight sets.

Boring, right? Well, not exactly. Not exclusively. Not even close.

Yes, on Tuesday, the women’s quarterfinals fell flat when Simona Halep and then Eugenie Bouchard both had “one of those days” at the office. Yes, on Wednesday night in Melbourne, Novak Djokovic had no trouble with Milos Raonic once he got through a tense first-set tiebreaker, winning it by the smallest amount possible, two points (7-5).

On Tuesday afternoon, Tomas Berdych and Rafael Nadal played a quality third set, but for most of their quarterfinal, a sluggish Nadal — still needing time to work his way back into form following the removal of his appendix last autumn — couldn’t give Berdych a stiff test. It is undeniable that portions of these “quick quarterfinals” in Australia failed to excite the senses.

However, it is a fallacy to think that straight-set matches are automatically boring or reduced in quality. Andy Murray’s straight-set win over Nick Kyrgios on Tuesday night was a very entertaining match, with Murray looking like a restored player after a trying 2014 spent on the heels of his own set of medical problems (primarily recuperation from back surgery). In key moments, Murray delivered spectacular lobs and other eye-catching shots to differentiate himself from the 19-year-old whose future on the ATP Tour is conspicuously bright.

Then came two quarterfinal matches on Wednesday afternoon — one featuring the best female tennis player on the planet, the other the defending champion at the Australian Open on the men’s side of the divide.

Want further evidence as to why shorter matches aren’t necessarily lower-quality matches or less compelling matches? The one three-setter among the eight quarterfinals in Melbourne was the scratchy, bumpy, unceasingly uncomfortable quarterfinal clash between an injured Madison Keys and an inconsistent Venus Williams. The match was certainly dramatic and engrossing, and both players competed admirably, but the rhythm-free match just wasn’t a study in clean, attractive tennis… at least not after Keys was treated during a medical timeout midway through the second set. It wasn’t anyone’s fault, but the interruption undeniably took away the natural flow athletes hope to establish and maintain on court. Yes, the match continued deep into a tense final set, going the distance, but this was a close contest in much the same way that Miami Heat-New York Knicks playoff games in the 1990s were close: Neither side was good enough to pull away.

Sometimes, the shorter matches during a day’s play can be the better matches. One will recall Petra Kvitova’s under-an-hour domination of Eugenie Bouchard in the 2014 Wimbledon final. Kvitova played tennis as well as it could be played in that match. One cannot realistically be better than one’s best, and Kvitova was at her best that afternoon in England.

So it also was with Serena Williams and Stan Wawrinka, who — if one wants to quibble — threw in some small pockets of errors here and there, but were essentially as good as they could be in their quarterfinal conquests on Wednesday.

Tennis diehards will instantly recognize that if you win roughly half of all your points with winners, you’ve played one heckuva match. This is what Serena and Wawrinka did as they marched into the semifinals.

Serena won 58 points to just 38 for Dominika Cibulkova, last year’s runner-up in the women’s tournament and the victor over Victoria Azarenka in the fourth round two days earlier. Cibulkova unfurled a masterclass against Azarenka, hitting 44 winners on a day when she won 89 points. She registered a plus-15 winner-unforced error differential in the face of relentless, attacking hitting from Azarenka, who played well in defeat. That was top-shelf tennis from a revived player who has used Australia as a tonic the past two Januaries.

On Wednesday, however, Cibulkova was the receiver of a clinic, not the giver of one.

Keep in mind that in a 6-2, 6-2 match as this quarterfinal turned out to be, only 16 games were played. Whereas Cibulkova’s 44 winners against Azarenka were unleashed over the course of three sets, Serena buried Cibulkova with a noticeably lower count of 31 winners. The lower count is a product of the shorter sets, but it’s a spectacular statistic. Distributed over the course of each of the match’s 16 games, Serena was averaging roughly two winners per game, every game. That’s frighteningly good in a sport where:

A) You just need to win four points by a margin of two to win a game;

B) Points are generally won in three different ways — with winners, unforced errors, and forced errors.

If you’re averaging two winners per game, the only way you’re going to lose a match is if you average three or more unforced errors per game. Yet, if you’re hitting the ball cleanly enough to get those two winners in each game, chances are you’re probably not going to litter the court with unforced mistakes.

Serena attained imperious form against Cibulkova, dominating an in-form opponent who did quite well to keep the second set a conversation as long as she did. Several of Serena’s 15 aces came at moments in the match when she faced tense scoreboard situations (15-30, 30-all, break point, etc.). Cibulkova or any other opponent couldn’t have done much to stop her.

This performance was made all the more impressive by the fact that Serena was not healthy. A raspy voice and continued coughing showed that the 18-time major champion was still in the clutches of a cold that’s been going around like wildfire in Melbourne among the players. Yet, Serena’s tennis is very healthy, thank you very much. Though she has a very short turnaround for the next day’s women’s semifinals against Keys, she’ll be heavily favored due to Keys’s aggravation of an adductor strain injury during her win over Venus. That adductor strain injury was initially suffered last year at Wimbledon.

Yes, Serena won 2 and 2. Boring, though? Hardly. Low-quality? It was the opposite thereof. Shorter does not mean worse in tennis… certainly not reflexively. You have to look at the details of the matter, and they were dazzling from Serena’s perspective on Wednesday. 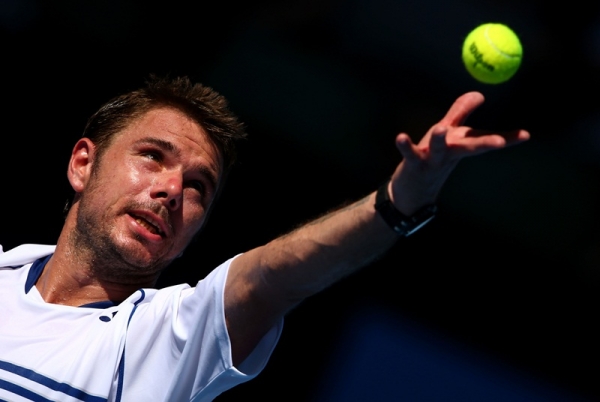 Stan Wawrinka might lose to Novak Djokovic in a blockbuster semifinal, but even if he does, being able to take down a formidable opponent in the quarterfinals and go deep into the bracket in Melbourne represents a very impressive and honorable defense of his first major title. Wawrinka is showing staying power in the sport, quieting the notion that he’s not worthy of his many 2014 achievements.

Once again, if you’re winning roughly half of your points with outright winners, you’re soaring in tennis terms. Wawrinka won 100 points to Nishikori’s 85, and he took 46 of those 100 points with winners. Wawrinka did litter the stat sheet with errors, but rarely when he faced a scoreboard deficit or a truly worrisome situation.

So strong was Wawrinka’s performance that he suffered only two true lapses on Wednesday, both of them brief: The first one came in the second game of the third set, when he was broken at love — a problem he quickly rectified by breaking Nishikori back at love in the next game — and then when having five match points at 6-1 in the third-set tiebreaker. Once Nishikori missed a bold “would-have-won-the-point-if-it-had-been-good” drop shot at 6-6 in that breaker, Wawrinka got a sixth match point and a chance to serve out the match, which he promptly did with an ace down the tee. When your two hiccups are:

you know you’ve put in a good day’s work.

Wawrinka was transcendent for much of this match. His world-class backhand, probably the best in men’s tennis among most connoisseurs (though not unanimously by any stretch), was singing songs of joy… and digging Nishikori’s grave. Wawrinka carved into his groundstrokes with a chef’s masterful touch, and while Nishikori wasn’t as robustly energetic as he could have been — his performance was outwardly similar to Rafael Nadal’s “not intense until the third set” quarterfinal against Tomas Berdych the day before — this match was far more about what Wawrinka established than what Nishikori failed to do.

If anything, Nishikori deserves a fair amount of credit for merely being able to extend the second and third sets as long as he did. Nishikori had a break point to get the second set at 5-5, despite full-flight play from his opponent, but Wawrinka swatted away the slightest hint of trouble in much the same way that Serena did. (Wawrinka’s serve generated 20 aces, and as was the case with Serena, many of them came in meaningful moments, not just 40-love situations when it’s easier to hit freely.) Many players would have folded the tent at 6-1 Wawrinka in the third-set breaker, but Nishikori saved five match points before the Swiss was able to cross the finish line, 8-6, in that last struggle inside Rod Laver Arena.

Nishikori — like Cibulkova — competed well toward the end. Yet, when great players play great, you’re just not likely to beat them. That’s the final story on a quarterfinal day with mostly short matches… but mostly good ones… because magnificent individual displays are supposed to count for something, even if pure drama is generally absent from the equation. Quality and drama often get linked together in sports, and it’s one of the great fallacies of sports analysis.

For American readers, the Packers-Seahawks NFC Championship Game was off-the-charts as a dramatic, spine-tingling spectacle… but it was a rubbish game stuffed with slip-ups and slop from start to finish. Drama? In spades. Quality? Precious little of it.

Serena’s and Wawrinka’s straight-set wins on Wednesday in Melbourne were precisely the opposite. Drama? You only got a small pinch of that in the third-set breaker of “KeiTennisStan.” Quality? Serena and Stan gave you as much as you could possibly hope for.

Wawrinka gets a day off before his blockbuster against Novak Djokovic. For the third straight year, the two men will meet in Australia. If their 2015 match is anywhere near their 2014 and (especially) 2013 clashes, fans will be in for a treat… except for Djokovic fans, who will nibble off what remains of their fingernails. The point is plain: Wawrinka might have reached the mountaintop against Nishikori in terms of pure form, but he has a long way to go to defend his title.

For Serena, still in the clutches of illness, she’ll have to manage her body heading into a semifinal against Madison Keys with under 24 hours of turnaround time. It’s true that Keys is physically injured, but Serena knows there are no guarantees in sports, and that her body has to pull through the challenge of playing back-to-back matches this late in a major, without a day off.

Serena and Wawrinka — a legendary champion and this year’s defending Australian Open champion — both played championship tennis on Wednesday. They both know they need to travel many more miles before they can lift a trophy at the end of this fortnight Down Under.