To the very end of her illustrious career as a professional tennis player, Maria Sharapova remained a pleasing and positive puzzle, one the sports world had a hard time solving.

Sharapova’s retirement on Monday, announced before her 29th birthday in April, offered one last revealing glimpse into an athlete who was easy to judge from a distance, but hard to know in full.

Whereas some athletes might reveal themselves to the world — Novak Djokovic generally fits such a characterization — Sharapova was a fundamentally guarded public figure during her years on the WTA Tour. Scripted, focused, determined, refusing to take any crap from anyone else, Sharapova stayed on message. (Keep her away from presidential politics — that would be a waste of her talents.)

Viewed from a great distance, this way of being came across as cold or unfeeling. Yet, if understood properly, it was just business. Sharapova is a businesswoman, and this retirement will surely enable her to focus on more business ventures at a relatively young age. Yet, Sharapova was and is more than just a businesswoman. She has always been a businesslike person.

In short, she has always been professional in the strictest and most positive sense of the term.

This feeds into the happy contradiction, the pleasing puzzle, Sharapova represents as she rides into the sunset as a tennis player. 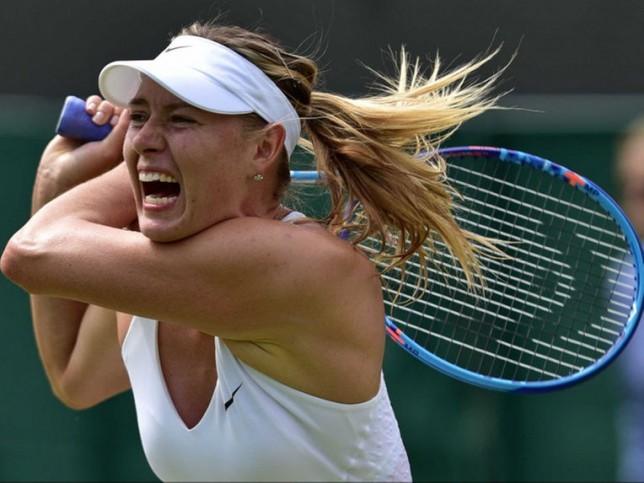 You can hear the loud shriek through this picture. Yet, Maria Sharapova’s career spoke loudly in a number of highly impressive ways, and that should represent the full measure of this highly admirable competitor.

A sense of sadness — or at least, disappointment — often visits any human person when s/he realizes that the idea of a career — not just in sports, but any field of endeavor — falls short of its reality.

You mean Peyton Manning fought that long and that hard in the courts to make another woman’s life that difficult? (Manning’s identity, like Sharapova’s, is not what the surface exterior suggests, only in Manning’s case, the reality is sadder than the surface image.)

You mean that this gorgeous and immensely talented player couldn’t fulfill her potential on the court?

Being able to see such possibility in another person, only to then absorb how little of it was realized, weighs down the soul. We aspire to greatness ourselves, but sharing in the joys and fulfillments of others is another central part of being human.

Whether you root for certain athletes or not, a part of the self always aches when potential isn’t used well by other people.

That last italicized question about the gorgeous and talented tennis player is — happily — not a question which needs to be asked about Sharapova in the hour of her retirement. It is a question which more centrally applies to Anna Kournikova and Ana Ivanovic.

Kournikova might have won a major title if her career had been able to develop, but it was cut short at age 21 due to significant back and spinal problems. The end of her career was not due to any personal shortcoming or deficit. Yet, the fact that she never won a singles title on tour — despite an avalanche of both publicity and commercial endorsement opportunities — paints a portrait of the outer image not matching the rough-and-tumble life of the athlete on the ground. For the latest Tennis odds, visit Matchbook

Ivanovic has always been an earnest striver, a person who exhibits exemplary attitudes and expresses them eloquently. A good sport and a student of life, Ivanovic’s failures as a tennis player don’t flow from an unwillingness to work hard. She has merely fallen short of her potential because she wants to succeed too much: She overthinks situations and dwells upon in-match moments with a self-awareness which hijacks performance. This on-court stress was — ironically — seized on by Sharapova herself in the immortal “Check her blood pressure!” incident from Cincinnati in 2014:

The happy contradiction of Maria Sharapova’s life — most centrally, her very public career as a tennis player — is that she grew to understand that she is both the embodiment and antithesis of the aesthetic ideal.

When Sharapova routed Serena Williams at age 17 in the 2004 Wimbledon final, the tennis world thought its latest power merchant had arrived. Sharapova blistered the ball and didn’t give Serena much of any opening in that match. Yes, we know where the Serena-Sharapova rivalry stands now, but on that afternoon in the summer of 2004, no one could have imagined how lopsided that head-to-head matchup would ultimately become… for the player who lost that day.

The sight of a teenager crushing a young Serena, just after her first prime period (2002-2003) had ended, offered the possibility that a complete player — one capable of winning double-figure major titles — had been born at The All-England Club 12 years ago. We all remember where we were as sports fans when certain athletes came of age:

* Roger Federer against Pete Sampras at Wimbledon in 2001

* Michael Jordan scoring 63 against the mighty Celtics in 1986 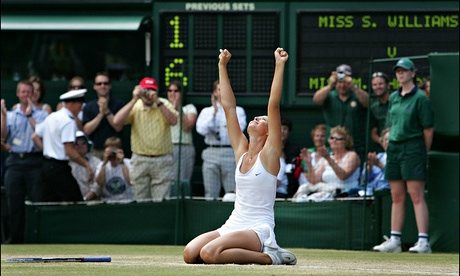 It is an electric moment — not just when an athlete wins a first championship or makes a first great mark upon the world, but when an athlete does something so impressive that we all wonder, “Is this The Next Big Thing?”

Sharapova created a sense of that against Serena, 12 years ago. We all wondered. We watched. We followed her career.

In the course of time, it became apparent that hopes of a complete player would not be actualized. A pall of disappointment surely accompanied this, and in 2007, Sharapova famously referred to herself as a “cow on ice” when playing on clay courts.

It was hard to see, in 2007, how Sharapova would complete the career Grand Slam by winning the French Open on the terre battue of Roland Garros. The top-tier achievements of the game’s true immortals — Steffi, Martina, Chrissie, Serena — were going to elude her, and to a certain extent, they have.

However, as news of her retirement sinks in, Sharapova ends her career with more majors at Roland Garros than anywhere else. It is the one major event she captured more than once. Clay became her friend, her comfort zone, leading to championship moments in both 2012 (Sara Errani) and 2014 (Simona Halep).

How did Sharapova conquer her feet of clay? The surface rewards work and patience more than all others. This is what centrally defines Sharapova at her very best, and represents the essence of a fulfilled career on court. 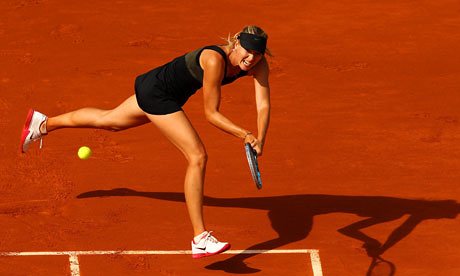 Look at this photo to the left.

It is all effort, poured out on crushed red brick. It is the signature shot Sharapova used to win her two French Opens. Defending and retrieving in the backhand corner of the court, Sharapova turned unfavorable positions into neutral if not winning positions. She reset points to defuse formidable hitters. She was not the 2004 Wimbledon champion who blasted Serena off the court. This was a figure skater on ice, the self-imposed “cow” label thrown into the dustbin of history on dirt.

Sharapova’s insistence on mastering clay — the surface which most easily and commonly messes up one’s socks and other pieces of apparel — is the perfect encapsulation of her career. Sharapova did not play elegantly the way Svetlana Kuznetsova can when fully locked in. She can’t serve with the ruthless efficiency of Serena. She can’t play the all-court game of Francesca Schiavone, whose own French Open title — won just before Sharapova’s — represented a “Life is Beautiful” moment in tennis terms.

Sharapova’s tennis — like her utterances within matches — was not beautiful. It became an exact inversion of one of the world’s most photographed and publicized women. That contradiction seems like a sad thing to contemplate, but Sharapova turned it into a happy one.

This woman has been blessed with good looks, international fame, and noticeable business acumen, given so many platforms from which to continue to leave a mark upon the world. (Briefly: One hopes Sharapova will use this platform for good, and not in the service of Vladimir Putin in the course of time. Sharapova was part of the Sochi 2014 Olympics, which were used — it seems — as a front by Mr. Putin to invade Ukraine. It’s not a great sin on Sharapova’s part, but one hopes she’ll grow into awareness on these sorts of matters going forward.)

When a person has Sharapova’s combination of wealth and glamour, it is easy to coast on those externals, and not sacrifice to become the best possible athlete one can be. Sharapova paid that price — always — and as she retires, she’s thrown the tennis community a curveball.

One would think that at 28 — having recently reached an Australian Open quarterfinal — Sharapova still has more tomorrows on the court. After all, she’s created so many new horizons of inspiration with her resolute approach to the sport. Why wouldn’t she continue playing, especially since Serena has redefined “old age” on the WTA Tour?

In other words, it is utterly and fully Maria Sharapova, the happy contradiction, the tennis player who felt like an underachiever in 2007 but should be remembered as — if not an overachiever — certainly someone who maximized what she had to give to the sport of tennis.