The 2016 Australian Open — which burst into dramatic color on Tuesday in Melbourne — can be summarized in this image: 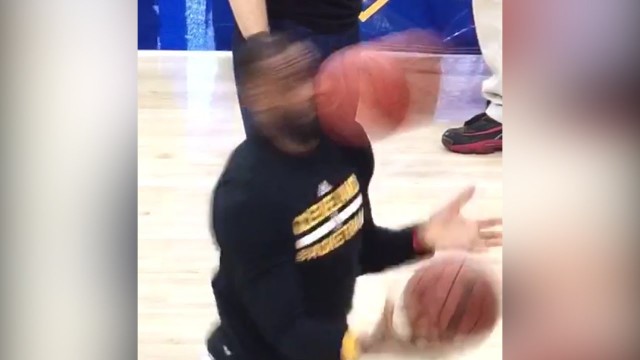 The tournament smacked a lot of players in the face, immediately changing the tenor of a very young tennis season.

Many of the events which unfolded during that late-summer fortnight in New York have been abruptly overturned in the Southern Hemisphere’s current summer.

While North Americans and Europeans spend these two weeks watching tennis in the overnight hours, the paths of various notables in the tennis world have plunged into the darkness.

Stop and briefly consider how much the tennis world has changed from the last major tournament of 2015 to the initial days of the year’s first major. (We still have 11 more days of tennis to go, too!)

Kevin Anderson has been slowed by injuries this season. Nevertheless, he took the court in round one against Rajeev Ram… and didn’t find answers to his problems. Anderson couldn’t win the first-set tiebreaker which — had he claimed it — might have offered him a portal to a straight-set win. Instead, he fell behind two sets to one and retired when trailing by a 3-0 margin in the fourth set.

Anderson had a right to be very optimistic about his 2016 season after finally making his first major quarterfinal at the 2015 U.S. Open. He got thumped by Stan Wawrinka, but his win over Andy Murray — months after his near-upset of Novak Djokovic in the fourth round of Wimbledon — suggested that his career was due for an autumnal renaissance at age 29.

Now, that optimism — while perhaps not gone — is certainly in winter hibernation.

Anderson is just one of several players who did something noteworthy four months ago in the Big Apple, but leaves Melbourne with nothing to lean on.

Fabio Fognini — who orchestrated a remarkable comeback against Rafael Nadal in New York — tumbled out of Australia in round one, courtesy of Gilles Muller. Fognini lost three of four tiebreakers, losing the big-point magic he found against Rafa in 2015.

Donald Young made the fourth round at the U.S. Open, busting through week one of the bracket on the hardcourts of his native country. After his loss to Santiago Giraldo on Tuesday, Young is left to contemplate yet another instance of failing to consolidate momentum at the majors.

Our partners at The Comeback documented the losses absorbed by Simona Halep and Venus Williams on Tuesday. Halep reached the U.S. Open semifinals, her one major semifinal appearance of 2015. What’s more noteworthy about that U.S. Open is that Halep defeated Victoria Azarenka in a surprising quarterfinal. Halep’s movement was severely limited in a fourth-round match she was lucky to escape (against Sabine Lisicki). Her ability to overcome Azarenka suggested that Halep would enter 2016 as the refreshed and renewed problem-solving force she was for much of 2014.

Nope. Halep timidly absorbed a straight-set loss to a qualifier ranked outside the top 128 who had never before won a main-draw match at a major.

Azarenka, who lost to Halep, is seeded 12 places lower than the Romanian — 14 compared to 2 — but she is in the ascendancy and appears to be the favorite to make the final from the bottom half of the draw.

Venus reached the quarters of that tournament, setting up an on-court (and non-doubles) reunion with her sister. Her loss to Serena marked the end of a solid and generally successful tournament, showing that the great champion still has a measure of staying power in the sport. Venus also reached the semis in Melbourne in 2015, so this first-round crash rates as a jarring development. It is both a punch to the gut and a blow to her collection of rankings points.

Again, who remembers that U.S. Open a few months ago?

If you needed a reminder at the start of 2016 about the difficulty of maintaining form and results from one major tournament to the next, you didn’t have to wait very long.