One relatively common, pervasive and durable component of tennis analysis — especially in relationship to the practice of predicting outcomes — is the citation of a player’s form.

He’s the more in-form player at the moment.

Based on current form, she should be the favorite.

The idea is easy enough to understand, and it’s not wildly irresponsible to use it when trying to predict the next match in a tournament, be it a one-week stop or this fortnight-long Australian Open in Melbourne.

There are, of course, limitations to everything under the sun. Lines of analysis fall under this umbrella. So do statistics. Momentum — a favorite word among sportswriters and sports broadcasters over many decades — is a real thing until it stops. Those who embrace analytics in sports loathe the use of the word momentum. Plenty of people (such as myself) who recognize the contribution of analytics to thoughtful sports analysis do not disagree with the analytics crowd; we merely are less willing to entirely discard certain terms (such as momentum) from our lexicons.

There’s a place for momentum, I would argue. There’s a place for other terms related to the psychology of sports, chiefly because sports ARE psychological as well as physical and tactical. Those terms have limits, yes, but they do have a place in our vocabularies as we try to make sense of events…

… such as Novak Djokovic’s cluttered, complicated, and needlessly drawn-out five-set win over Gilles Simon on Sunday in Melbourne Park. 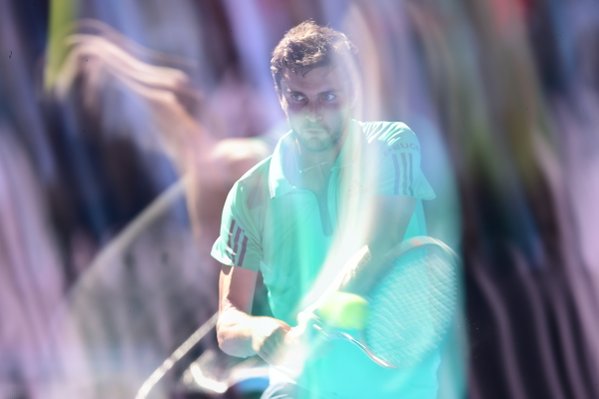 The reality of seeing Djokovic hit 100 unforced errors with his normally trusty racquet was jarring in itself. The occurrence was even more perplexing due to Djokovic’s utter lack of difficulty in hitting a tennis ball over the previous few weeks and, for that matter, the previous year. Djokovic played a poor second set against Stan Wawrinka at Roland Garros last June. Other than that one set, the World No. 1 made no fundamental misstep in any event of appreciable consequence.

This spraying, stumbling, stop-and-start stutter of a performance came out of nowhere. It is the sort of afternoon — instructively, spent in the sunshine Djokovic has often struggled with — which can lead many fans to think that, “based on current form,” the Serbian legend is in some trouble at this tournament.

It’s merely logic which has its limits.

A very brief survey of mid-course — or early-stage — struggles at major tournaments in this Golden Era of men’s tennis shows that the ugly escape is far from a sure sign of impending doom. In many ways and on many occasions, Djokovic has used the early-tournament escape as a portal to a deeper run. Rafael Nadal and Roger Federer have done the same.

It was not too long ago that Djokovic won another five-set fourth-round match at a major. He didn’t hit 100 unforced errors as he did versus Simon on Sunday, but he didn’t play his best. Yet, he was able to survive a two-day five-setter against Kevin Anderson.

In the quarterfinals against Marin Cilic, he committed only 12 unforced errors in a straight-set win.

Djokovic didn’t play his best in the semifinals against Richard Gasquet, but he didn’t need to. Much as Simon is the kind of opponent who was not likely to (and ultimately did indeed fail to) fully punish Djokovic for his mistakes, Gasquet was also not in the best position to capitalize on momentary lapses from the Serbian superstar.

There is something to be said for this: Athletes don’t take the court intentionally trying to play poorly, as though to say, “I need to play less than my best today so that I’ll be better later on.” No one’s saying that, and no one should infer that from anything that’s been written here.

However, athletes certainly do size up an opponent and say, “I don’t have to take as many risks or show as much of my hand today as I would against another opponent.”

If you can spill a little less energy in a match and don’t have to push boundaries as much, knowing that other battles lie ahead, you should do so… as long as the opponent isn’t in the zone. Simon defended and competed well, just as he always does, but he was not ruthlessly efficient or clean. He committed plenty of errors in meaningful situations, especially at 1-2 in the fifth set, when a flood of mistakes allowed Djokovic to break for 3-1 and take control of the match.

Djokovic surely thought he could show less of his full arsenal to Simon, but the problem which emerged is that even the most basic shots (especially the down-the-line backhand from the ad corner) were not functioning properly. He had to put forth more energy, but what remained is that he played a lot of subpar tennis.

Being the champion he is, he survived — partly because of his opponent’s lack of big weapons, but very much because he has mastered the art of high-level competition. Djokovic is the king of winning the uncomfortable and frustrating match. It might be his career trademark.

MELBOURNE, AUSTRALIA – JANUARY 19: Rafael Nadal of Spain speaks to the media during a press conference following his loss to Fernando Verdasco of Spain during day two of the 2016 Australian Open at Melbourne Park on January 19, 2016 in Melbourne, Australia. (Photo by Darrian Traynor/Getty Images)

Then consider Rafael Nadal in this discussion.

You remember the escapes against John Isner and Daniel Brands at the French Open (2011 and 2013, respectively).

You remember the consecutive five-setters against Robin Haase and Philipp Petzschner at the 2010 Wimbledon tournament, which Nadal won to give himself a second crown at SW19.

Nadal might not have been taken to the knife’s edge of defeat in a number of his major titles, but he did have to work his way out of trouble — consider Philipp Kohlschreiber at the 2013 U.S. Open and Paul-Henri Mathieu in the 2006 French Open. Nadal has often needed to play his way into the flow of a tournament, laboring at times so that his best stuff would always be there when Federer or Djokovic loomed in the semifinals or final. (It was almost always there, indeed.)

His last major title, at Wimbledon in 2012, was a perfect example of the economy of tennis in action. Scratchy performances in the third round (Julien Benneteau) and fourth round (Xavier Malisse) gave way to fluid, focused performances in the quarterfinals and beyond. Federer bagged major No. 17.

At the 2009 French Open, Federer was in huge trouble against Jose Acasuso and Tommy Haas in the early rounds. He fought out of those ditches and gained his one Roland Garros championship.

At the 2006 and 2010 Australian Opens, Federer had to endure rough nights at the office against Nikolay Davydenko in order to lift a trophy at the end. Davydenko frequently represented a tough opponent, but one Federer was always able to defeat at the majors, en route to a championship or final (in most cases).

In the 2008 U.S. Open, Federer had to will his way through a very tense five-setter in the fourth round versus Igor Andreev. Back in 2004, Federer had to deal with a nasty wind and a wise, old version of Andre Agassi to prevail in five sets. Only after that win did Federer figure out how to conquer New York and the challenges of the U.S. Open.

Once in a while — think of Nadal at the 2010 U.S. Open, Federer at the 2007 Australian, or Djokovic at the 2011 Australian — everything comes together for a player. He never faces a set-based deficit in any match and cruises to the title. Those might seem to be commonplace, but they’re actually less frequent than the alternative: encountering at least one bad match at some point in the first five rounds and getting through it with B-minus or even C-minus form. That escape liberates mind and body, enabling better tennis to shine through when it counts.

This is the economy of tennis. Novak Djokovic’s win over Gilles Simon might appear to be a sign of weakness. The verdict here is that it’s a counterintuitive show of strength. It will probably carry Djokovic to a title by the time this next week is through.