Sports psychologists will tell their clients — or any athletes they might have the chance to speak to in a professional context — that anger must be channeled into more positive emotions. Anger cannot consume. It cannot be nurtured or protected or perpetuated. It will eventually swallow up concentration, devour energy, and hijack the peak performance athletes are trained to both pursue and then deliver.

Anger is not supposed to be a friend of the high-level athlete. Sure, a motivational moment every now and then — something to get a listless body fired up, something to awaken the senses after being flat for a period of time — certainly helps. However, that’s a temporary lighting of the pilot light. After that brief instance, anger is supposed to subside and become not a burning, uncontrollable rage, but a steady glow of warm energy.

Yes, it’s important to express anger, to vent one’s frustrations. Repression is to be avoided if at all possible. However, that very statement assumes that an athlete won’t be tempted to vent every other second. The risk of being angry is supposed to arise very occasionally during an athletic competition. It’s not supposed to be a constant companion during the gameday experience in any sport… with the possible exception of American football, which does require a certain degree of savage intensity throughout a game, especially if you’re a lineman or linebacker.

Generally, the temptation to vent anger is supposed to be a rare thing, and when it emerges constantly, it’s not considered an asset for an athlete. It requires work to always curse, to always shout, to always devote at least some physical and mental activity to something other than performing the repetitive tasks a given sport demands.

Basketball players have to calm the mind before they shoot free throws.

Pitchers in baseball have to steady themselves, as do hitters. Hockey players are too busy skating on a thin blade to worry about being angry, and if they continue being angry, well, they’ll find themselves in the penalty box. Golfers must exhibit total clarity.

Tennis players? Absolutely — they’re not exempt from this dynamic.

Serving is a precise art. Hitting the many hundreds of groundstrokes that go into a long match must be done in a relatively settled state. Rafael Nadal is intense, but he’s consistently the picture of concentration. Novak Djokovic might get angry from time to time, but his competitive fury seems to burn just beneath the surface instead of always being so outward. Djokovic is more demonstrative than other elite players in men’s tennis, but even he has become better at taming that beast, compared to his earlier years. So has Andy Murray, helped by Ivan Lendl and now Amelie Mauresmo.

It’s very, very rare to find a tennis player or any athlete who plays better when fully angry. To be precise, this is not about players who get riled up by bad calls or are fueled by the desire to get revenge against a specific opponent. This is about athletes for whom anger is a default setting.

John McEnroe is the classic example of the exception which proves the rule. Against Bjorn Borg, he repressed his anger because he respected Borg so much, but when pitted against Jimmy Connors or other rivals, Johnny Mac actually used anger as a friend. It often carried him to a higher level of play. He didn’t channel it so much as he reveled in it. He relished being pissed off.

The tradeoff, though, is that after a certain point in his career (this is known as 1985), McEnroe was never the same force again. It was as though all the angry energy he released early in his career left his body and mind spent as he entered the latter half of the 1980s. He didn’t age well as an athlete — not in singles, at any rate — the way Connors did then, or as Roger Federer is managing to do now. However, when in his prime, McEnroe was “The Angry Athlete Who Succeeded.”

Mr. McEnroe might now have a true successor in tennis. His name is Nick Kyrgios, and he defied the emotional laws of tennis in his stirring five-set win over Andreas Seppi on Sunday night in Melbourne, Australia. 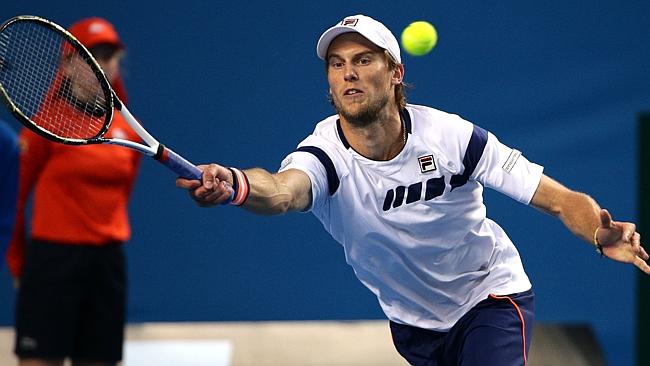 Andreas Seppi could not parlay a win over Roger Federer into his first-ever major-tournament quarterfinal appearance. The composure he possessed against Federer didn’t quite emerge against a 19-year-old opponent. Sports can be eternally vexing that way. Seppi can say that he did something great at this event, but failing to notch that quarterfinal achievement is something that will follow him in the coming months… if not a lot longer.

Yes, it is true that Kyrgios is only 19 years old. Yes, young people do impulsive things. They react a lot more spontaneously. Their outbursts are more frequent. By all means, they should be given some space, afforded the opportunity to grow into themselves when they become 23, 26, and then the 30-year-old veteran Andreas Seppi currently is. Brashness, boldness, outward arrogance — these characteristics, when displayed by 19-year-olds in an international spotlight packed with pressure — should not be seen as core verdicts on a person. A 19-year-old’s attitudes and gestures should not be allowed to define who and what he is.

Yet, with all that having been said, there are always limits to what is and isn’t acceptable. There are, for people of every age, certain things that just aren’t supposed to be done and should not be allowed under any circumstance. Kyrgios, to put the point plainly, crosses this line.

Against Seppi, Kyrgios repeatedly bounced his racket — a gesture of extreme frustration and disapproval — after Seppi hit a good first serve on a key point. Showing authentic outrage after an opponent’s good shots conveys a lack of acceptance, a sense that quality performance from the other side of the net somehow isn’t fair or allowable. It’s poor form beyond the level of what one should reasonably tolerate from any professional competitor of any age. (It wouldn’t be tolerable if in a 19-year-old who played college tennis, either.) There’s a basic understanding of what tennis requires. It shouldn’t be too much to ask a player to avoid bouncing a racquet in disgust after something as ordinary and common as an opponent hitting a big serve, and nothing more. Seppi is a gentleman-citizen of the ATP Tour. Nothing about his behavior on Sunday was in any way a catalyst for Kyrgios’s actions. The Australian teenager was merely upset at being aced or having to absorb a service winner from the Italian’s racquet. Someone ought to have a talk with him about it sometime.

Yet, for all that Kyrgios bounced his racquet… and swore (unceasingly and like a drunken sailor)… and shouted… and gesticulated with his whole body, all in the course of a five-set match covering three hours and 34 minutes, he was the fresher player at the end of the match.

Yes, he’s only 19. Yes, he was playing before a jacked-up host-nation crowd at Hisense Arena in Melbourne Park, one which lent his match with Seppi a Davis Cup flavor. Yet, the laws of emotional physics tell us that 19-year-old professional athletes are not supposed to run a long-distance race when continuously calling forth negative energy in their bodies and minds. Nadal — the foremost recent example of a great player when still in his teens — could quiet himself at a very deep level and achieve perfect concentration in a moment of importance. That’s what helped him succeed so much at an early age. Kyrgios did not do anything of the sort against Seppi.

Kyrgios kept bludgeoning his inside-out forehand. He kept connecting on crisp down-the-line backhands to catch Seppi off balance. Most of all, he kept cracking a thunderbolt serve which saved a match point at 5-6 in the fourth set and dug him out of trouble in the fifth when Seppi was trying to push for a break of serve, chiefly at 4-all following a rally from a 4-1 deficit.

Kyrgios was sluggish for the first two sets of his match, as Seppi bossed him around the court. As he fell behind by two sets and went about the business of making his comeback, Kyrgios — still spewing anger at every turn — steadied himself. The only time the Australian lost focus was when he gained that 4-1 lead in the fifth. Having something to protect — and therefore, something to lose — Kyrgios tightened up. Yet, when Seppi leveled for 4-all and could begin to smell a break of serve that would enable him to serve for the match and his first major quarterfinal, Kyrgios once again accessed the concentration which enabled him to hold for 5-4 and maintain the upper hand. When Seppi played a loose game at 6-7, Kyrgios pounced and finished off the man who finished Roger Federer’s stay Down Under.

The irony was striking: Seppi was such a cool customer against the 33-year-old, been-there-and-done-that Federer, the consummate winner and a practiced student of steadying the body and mind in pressure-packed moments. Seppi beat one of tennis’s zenmasters to reach the fourth round in Australia. Yet, when pressure revisited him two days later against a late-teen at the beginning of his journey through the world of professional tennis, Seppi wasn’t as bold or as decisive — especially not with the crosscourt forehand that felled Federer. The Italian played more passive points and lost the willingness to execute a simple game plan based on hammering short balls to the open-space corners of the court.

Kyrgios — despite remaining angry — was the player who kept things simple and stayed more aggressive over the final three sets, particularly in the fifth. The 19-year-old made his second major quarterfinal, becoming the first teenager to make two major quarterfinals since… yes… Federer in 2001 (Roland Garros and Wimbledon of that year, before turning 20 in August). Seppi, meanwhile — despite all his experience at the age of 30 — is left still looking for that first major quarterfinal. The veteran who seemed to be in such complete control of the pace and texture of the match through two sets played the final three sets like a rookie. The young pup — breathing fire without ceasing — nevertheless excelled while angry. He row, row, McEnroed his boat to safe harbor in Melbourne, earning a round-of-eight date with Murray in a delicious clash of styles, chiefly serve versus return.

You’re not supposed to thrive while angry as an athlete. Nick Kyrgios broke that rule, much as he frequently broke the audible obscenity rule during this match… but was never cited for it by chair umpire Fergus Murphy.

It’s too soon to say if Kyrgios will forge a career anywhere near what John McEnroe compiled. Yet, if this match win over a gut-punched Andreas Seppi is any indication, it could very well be true that Nick Kyrgios has capacities for using anger that few other tennis players have possessed over the past 30 years… ever since the final year when McEnroe was a top threat to win major championships.

It will be immensely fascinating to see not only if Kyrgios can forge a first-rate career for himself, but if he can do so while not tempering or modulating his currently unmasked and unrestrained fury.

It wouldn’t be a heartwarming spectacle by any means, but just imagine the global celebrity and publicity magnet Nick Kyrgios could become if he can win at the highest level and haul in the biggest prizes in tennis… all while being just as mad at the world as John McEnroe was in his prime.

Want to relive the 1980s? Nick Kyrgios could make tennis fans do so before too long. The ride — successful or not — will be anything but boring.