Between the men’s and women’s draws, 17 upsets emerged in the first round if viewed strictly through the prism of seeded players losing–five from the men and a whopping 11 on the women’s side. Some of these came out of nowhere, some were more-or-less expected, some were in between.

In order of most expected to least, this is how shocking or ground-breaking those upsets were, but I’m pretty sure we all know what the biggest one will be (hint: it’s not the one you’re thinking of).

This was not a good matchup for the mercurial Italian, who prefers clay courts to hard. Muller has a big serve and can force a lot of tiebreaks, especially on faster courts. Fognini fought well through the entire match, which is a great sign for him, but he just couldn’t beat the big server. If you read my draw takeaways, you’ll know I didn’t expect Fognini to go to far here anyway. This wasn’t unforeseen.

Larsson defeating the clay-courter isn’t that big of an upset, nor is it too much of a surprise. It might be an upset on paper, but less than 20 ranking spots separate the pair. The lopsided score is a bit surprising, but the upset really isn’t.

Same as above. These two are ranked 15 spots apart. It’s an unfortunate draw for Garcia, but as upsets go, this isn’t really a big one.

A third not-upset upset. Lepchenko is ranked only 20 spots below Tsurenko and has been doing increasingly well on big stages in recent years, at least on hardcourts.

This wasn’t unexpected at all if you have been following Anderson recently. On paper, he should beat Ram without trouble. They play similar styles; Anderson executes better. However, the South African came into the tournament with a knee injury and, while he said it wasn’t bothering him before the tournament, many of his fans did not expect him to be able to win a match here because of it. Hopefully playing on that knee didn’t exacerbate the injury at all.

This weighs equally with the Anderson match in terms of unexpectedness. Karlovic came in hurt and tried to play through an injury. It wasn’t much of a surprise when he failed.

Sorry guys. I tried to play today but the pain in my knee was very sharp from the beginning. After 2 sets I just couldn’t take it anymore..

This is shocking to people who don’t follow women’s tennis closely, but it shouldn’t be too surprising to those who watch consistently. Kasaktina is a rising star who skyrocketed up the rankings with a strong finish to 2015. The 18-year-old is still a relative unknown, though. Just how unknown is she? This is her picture on the Australian Open website: 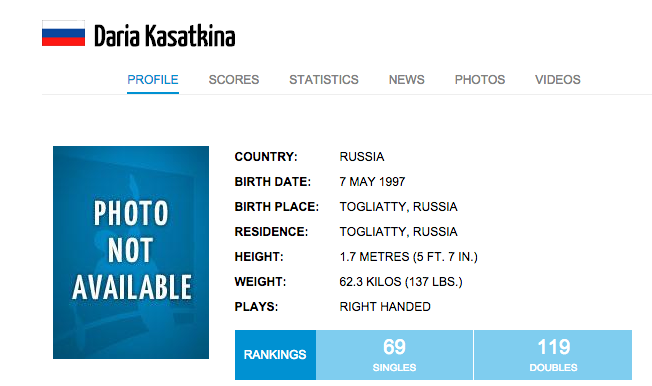 It won’t stay that way for long.

This should be a surprise, but it really isn’t. Stosur, a U.S. Open champion, never does well at her home Slam. She has never even reached the semifinals. It seems disappointment in Melbourne is her fate.

This is actually a pretty big shock, but it doesn’t carry the name value of some of the ones below it on the list. Davis is a young American who hasn’t quite made her breakthrough yet, but maybe this is the start of it. Pavlyuchenkova should win a match against a player outside the Top 100, especially at a Slam.

Petkovic is in a bit of a funk right now and couldn’t hit her way out of it. She played a poor match, one she should have won, but that’s part of the life of a professional tennis player. If she can find her form, she will make second weeks of Slams again in no time.

Rubin might have a future as a top tennis player, but he is definitely not there yet. Paire just couldn’t find any rhythm during the match and played very poorly. He blasted his opponent afterwards, saying that he lost to a player he should never lose to. Rubin is ranked outside the top 300 and earned his way in through a wild card, getting the USTA bid. This was not a good loss for Paire at all, nor was it expected. Rubin is better than the Frenchman gave him credit for, but this is absolutely a match Paire should never have lost.

It wasn’t a good first round for 17-seeds, that’s for sure. Errani has been erratic for a while now, but this is a match she should have been able to tuck away. The former Grand Slam finalist (2012 French Open) just couldn’t find her way after a dominant first set. Way too many errors led to a bad loss.

Wozniacki appeared to be in control of this match until she rolled her ankle in the second set. She was never quite the same after, though she fought like a champion and made up for it by hitting the ball as hard as she could. It’s possible that she would have lost this match even without the injury, but it certainly didn’t help. It’s back to the drawing board for the Dane, whose results in Melbourne have gotten worse by one round each of the last five years.

This is a big upset on name value, but we have learned to expect this from Venus in recent years. Her 2015 resurgence notwithstanding, it is unfair to expect Venus to win every match. She is not young anymore (in tennis player years, at least) and Sjögrens Syndrome is not easy for any athlete to deal with. Fans want to see Venus do well and are always surprised when she loses, but it might be a little unfair to expect her to always win as we did a decade ago.

You thought this would be No. 1, didn’t you?

It doesn’t even crack the top two, though, thanks to some absolute stunners in the women’s draw. Even though this is now the third consecutive Slam tournament in which Nadal has failed to reach the second week, it always feels like a jolt to the system. Nadal came in with a 14-2 record against his compatriot, though Verdasco had won two of the last three. What is more shocking than the upset is how it happened.

Verdasco just blasted Nadal off the court; there was not much the Majorcan could have done. Nadal in his prime would have won that match, but it is clear that Nadal is no longer in his prime. Whether he can find his way back to top form will probably be the biggest question from this entire tournament.

Not only is Stephens losing to a qualifier such an ambush; the way she lost is an eye-grabber. This was one of Stephens’s worst matches since becoming a professional player. She played badly and got beaten badly. There is not much more to say. It was still an out-of-nowhere exit for someone many expected to give Serena Williams a run for her money at this event.

The second seed lost a jaw-dropper on the second day to a qualifier. There is not much more to add. Halep never got into a good rhythm and will leave this tournament far earlier than she ever imagined. It just goes to show that even for the best players in the game, one bad day can end everything… even against a player who had never won a main-draw match at a major tournament.

Yesh has been a fan and student of college football since before he can remember. He spent years mastering the intricacies of the BCS and now keeps an eye on the national picture as teams jockey for College Football Playoff positioning.